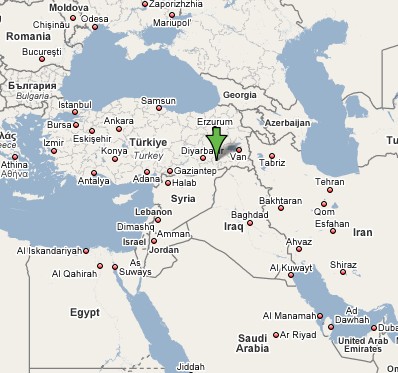 Around 100 villagers gathered in front of the German, Austrian and Swiss embassies on Tuesday to protest against the construction of the Ilisu Dam on the River Tigris. Once completed, the controversial project would submerge the ancient town of Hasankeyf (it’s 12,000 years old) along with 200 nearby villages, displacing up to 78,000 people.

The government started to move ahead with the dam in the late 90s, but it was soon met with massive protests which led several companies to withdraw from the project. Nevertheless, the Turkish government remained eager to complete the dam.

Tuesdays protest was a relatively calm event, Holding signs and shouting slogans, the group delivered a letter signed by 1,500 people from the threatened villages which demanded the three governments to withdraw their funding from the dam.They also warned that they will be forced to seek asylum if their homes are destroyed.

“Hasankeyf is our history, our culture and our memory,” the protestors said in the letter, stressing that instead of a dam, the region needs better development of tourism and agriculture.

Bethiye Kepti, who lives in the threatened village of Suçeken, located near Hasankeyf, defended in particular the asylum demand: “We will lose everything (video). Those who destroy our livelihood and our historic roots have to care for us and give us an alternative future.”

One of the parties involved in the dam, the Ilisu Consortium of Austria and Turkey’s State Waterworks Authority (DSI), has said in the past that no one will be made homeless by the dam, and that anyone who loses their land will either be relocated to ‘modern government housing’ or receive monetary compensation—but there’s a lot of doubt they actually mean it.

A plan exists to rebuild the center of Hasankeyf at a different location aswell, but that’s sort of like building a metal tree to replace an actual one…. 12,000 years history will still be lost.

With the dam situated on the Tigris river, just 65km from the borders of Syria and Iraq, the Ilisu dam will also have a considerable impact on these two southward States, especially Iraq.

According to a 2006 article by Irin News, the dam is going to reduce the amount of water flowing from the Tigris by 50 percent.

“The normal annual amount of Tigris water at the Iraqi-Turkish borders is 20.93 billion cubic metres and this amount will be reduced to 9.7 billion cubic metres per year with the completion of this dam,” explained Ali Nasser, an expert at the Ministry of Water Resources.

“And that will deprive at least 696,000 hectares of agricultural land from fresh water. And, of course, this will have negative affects in the fields of agricultural production, potable water and electricity,” Nasser added.

The reduction of water flow will be felt far beyond the farmlands. In the same article, Abdullah Ramadan, an official with the Marshlands Revival Centre “depicted a grim picture for the newly revived marshlands [near the city of Basra] with the construction of the dam.”

“The marshlands are at risk of losing about 3 million cubic metres of water per year and this will endanger the life there,” Ramadan said.

Iraq’s fabled marshlands have been at the centre of water-related controversy for some time. Following the first Gulf war in 1991, former Iraqi president Saddam Hussein revived a programme to divert the flow of the Tigris and Euphrates Rivers away from the marshes in retribution for a failed Shi’ite uprising.

Hussein’s plan transformed these wetlands into desert, forcing some 300,000 inhabitants out, according to Ramadan. Of the almost 3,600 square miles of marshes in 1970, the area shrank by 90 percent to 300 square miles in 2002.

However, since the start of the US-led occupation of Iraq in 2003, efforts to restore the marshes have gradually revived the area as water is restored to the former desert. Ramadan said that about one-third of those forced to leave the area after the marshes were drained have now returned.

“We were happy to get rid of Saddam, but now we got another enemy – Ilisu,” Ramadan said.

With the Middle East already suffering from water scarcity–and with an ongoing population explosion throughout region, the Ilisu Dam will undoubtedly cause conflict as the demand for water continues to increase.

Death to the River Tigris

The effect on the biodiversity dependent on the Tigris and it’s tributaries is equally massive. The “Save Hasankeyf” website explains that the entire ecosystem will be “destroyed by ‘Ilisu’ for a total length of about 400 kilometres.”

This would happen in two ways: first, through impoundment above the dam, where the rivers would be transformed into a reservoir: and second, through the upsurge below the dam. Ilisu is planned to be a peak electricity power plant. Unlike such power plants along the Rhine or Danube, not as much water is supposed to exit below the reservoir as what enters from the river above. Every day, when large amounts of electricity are needed in the cities and industrial regions, the water will be released in a sudden upsurge. This means that most of the day only a trickle will flow out from the power plant, while at peak times a flood wave up to 7 meters high will be released. This artificial drainage pattern is deadly for all life; hardly any river animals can adapt to a daily flood.

Experts from the renowned Eidgenössische Technische Hochschule (ETH) in Zurich have projected that the water below the dam will be about 10 degrees colder than it is now, heavily polluted and oxygen-poor. People and wildlife downstream will receive a daily flood of dirty, cold and oxygen-depleted water.

Further information about the ecological impact of the dam is available here.

Despite these considerable problems, the Turkish Government is determined to get the dam finished as soon as possible. But that’s not going to deter the thousands of people and dozens of NGOs opposed to it.

Commenting on the Tuesday’s gathering, Christine Eberlein of the Berne Declaration, a Swiss NGO, makes that quite clear. She says: “Expect more protests.”

If you yourself would like to support the effort to stop the Ilisu Dam, you can:

To learn more, please visit the Save Hasankeyf website.