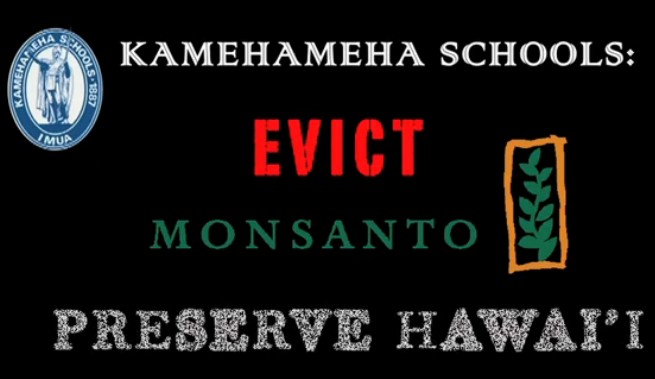 For over 20 years, Hawai’i has been the global center for the open-field testing of Genetically Modified Organisms (GMO’s), including pharmaceutical crops. Over 5,000 experimental tests have been conducted by Monsanto, Dow, Dupont/Pioneer, Syngenta and BASF that spray chemicals on an almost daily basis on our most valuable lands. They are supported by tax-breaks, and beneficial relationships with landowners, regulators and politicians. We estimate GMO companies own or lease 40,000 — 60,000 acres that are sprayed with over 70 different chemicals.

A new vision for Hawai’i would promote small farms that grow chemical-free produce, employ our youth and restore the indigenous ahupua’a system. Hawai’i has less than 3,000 acres of certified organic farmland, which is 0.27% of Hawaiian farmland.

Kamehameha is the only institution with the land, capital and resources to reduce our food imports, that are now over 90%, and ensure that Hawai’i does not run out of food in case of natural disasters or rising oil prices.