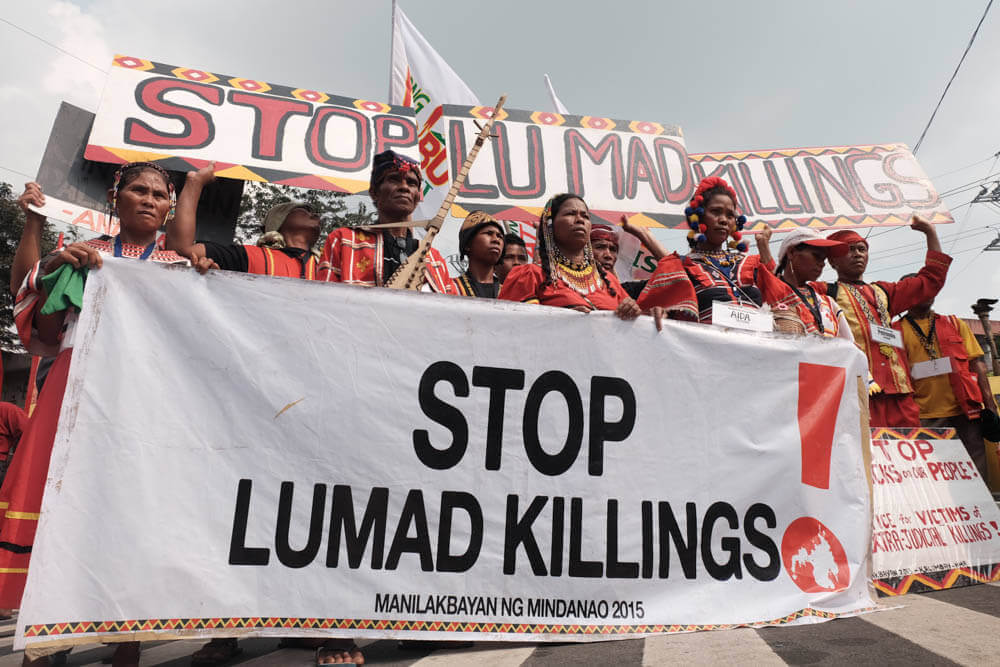 The Lumad are Indigenous Peoples in the southern Mindanao region of the Philippines. The term Lumad is short for Katawhang Lumad (Literally: “indigenous people”), a description officially adopted by delegates of the Lumad Mindanao Peoples Federation founding assembly on June 26, 1986. This grew out of a political awakening among tribes during the martial law regime of President Marcos and reflects the collective identity of 18 Lumad ethnic groups. The assembly’s main objectives was to achieve self-determination and governance for their member-tribes within their ancestral domain in accordance with their culture and customary laws.

The Lumad have a traditional ancestral concept of land ownership which is communal private property. Community members have the right utilize any piece of unoccupied land within the communal territory. Lumad ancestral lands include rain forests, hunting grounds, cultivated and uncultivated land and valuable mineral  resources (copper, nickel, gold, chromite, coal, gas, cement) below the land.

For decades the Lumad had been forced to physically defend their right to control their ancestral territories against corporate plunder and militarization. Unable to match up to the armed forces of the government and profiteers the Lumad have had to flee their communities; their land has been seized by multinational corporations and logging companies. Wealthy Filipino migrants and multinationals are planting and exporting palm oil, bananas, rubber and pineapple.

Unequipped to understand the modern land tenure system, the Lumad have established schools in their communities supplying knowledge to young adults and youth on how to protect their rights, property and culture. While these schools have always posed a threat,  President Duterte has taken the unprecedented step of directing the Department of Education to close them down and has also encouraged the killing and arrest of Lumad teachers, which continues to go unpunished.

The history of violence and unwarranted (extrajudicial) killings of Lumad at the hands of military, paramilitary, and private security forces is in the hundreds, with the arrest and torture Lumad activists in the thousands. Fifty-six percent of Philippine military have been deployed to the Mindanao region. Today many of the Lumad have sought safety and shelter in evacuation centers where they and other victims of war are crowded into small spaces, lacking sanitary conditions and food, and endure harassment by local police including sexual harassment. 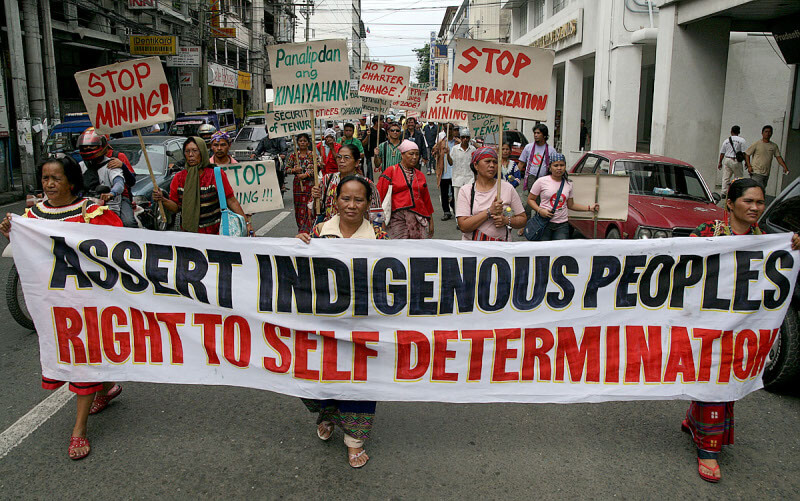 Bolstered by the recent visit of Trump to the Philippines who has promised and delivered increased in military funding to the Philippines, President Duterte has extended martial law on the whole island of Mindanao under the guise of war on terrorism and drugs and has launched a full-scale assault on social justice activists throughout the Philippines, including the Lumad people.

Where there is oppression there is resistance. The Lumad have organized protest actions against mining, extrajudicial killings, and the militarization of their communities, and have led “Manilakbayan” people’s caravans from Mindanao to Manila where they have built unity with Moro and peasant communities and other oppressed sectors in Mindanao and, together, have brought these people’s demands to the national capital. There are some young Lumad that say, because the repression suffered by their community is so bad, at times they consider joining the New Peoples Army. In fact, some Lumad do engage in armed resistance to defend their ancestral lands, as Lumad have done since time immemorial, from fending off logging corporations using spears and native weapons to taking up arms with the New Peoples Army as part of the decades long revolutionary struggle led by the Communist Party of the Philippines. The Lumad struggle continues to take many forms—and as state repression and encroachment on ancestral lands has worsened, Lumad resistance has continued to grow.

In October of 2016, the Lumad people sent messages of solidarity to the tribes and Water Protectors at Standing Rock as they clearly understood the universal common struggle of indigenous to protect the land. 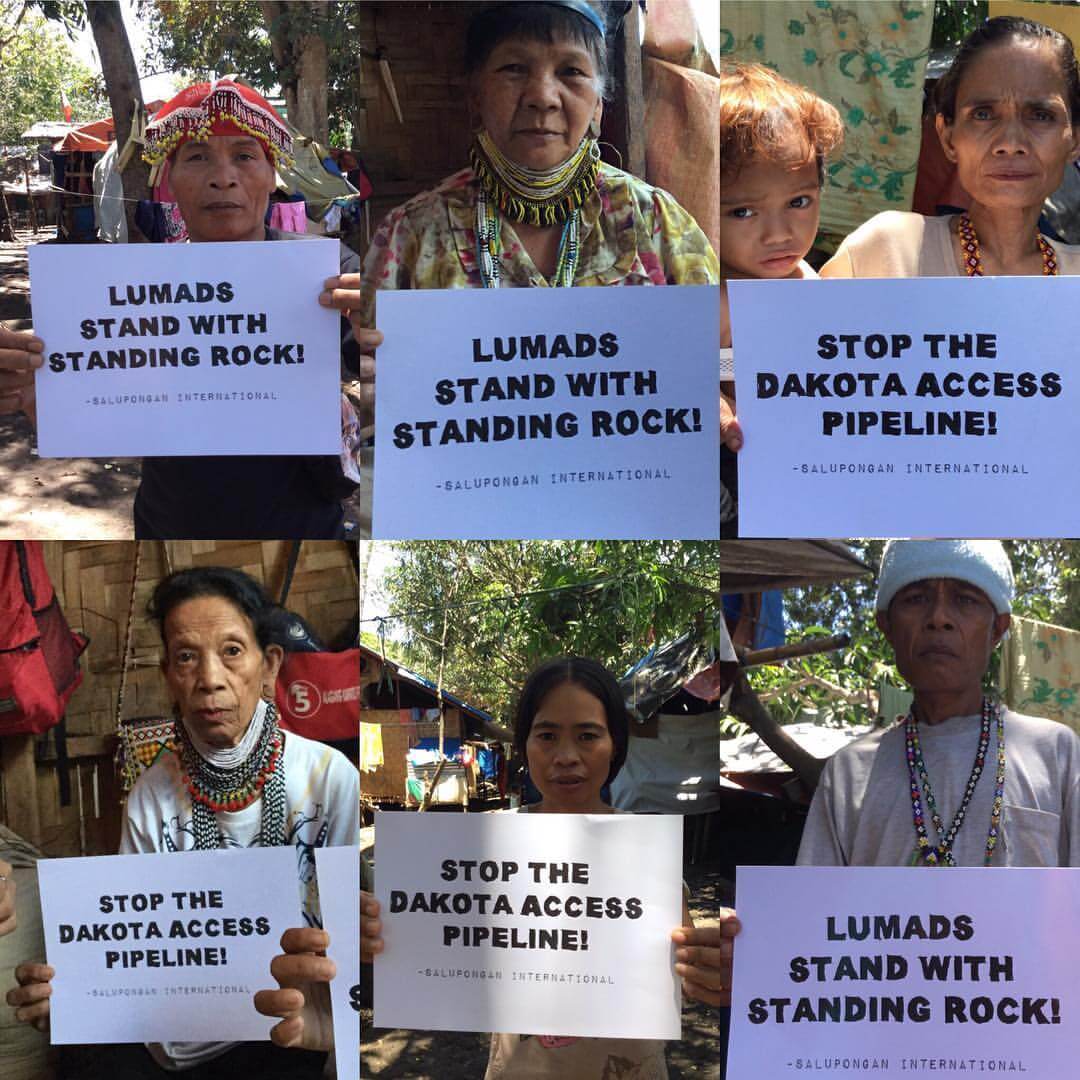 In this moment of intense violence, the International Interfaith Humanitarian Mission 3.0 proposes the following recommendations for the victims of the military operations in Marawi City: Continue relief, medical services and psychosocial intervention for the victims; a just recovery and reparations for homes and properties destroyed; make the Duterte government accountable for the death, displacement of residents and destruction of Warawi City; put people over profit in the rehabilitation of Warawi so that the residents can return to their original communities not profit driven development.

Pam Tau Lee is Chair of the International Coalition for Human Rights in the Philippines (ICHRP) – U.S.