Stop closing schools for the landless and support MST and WSF 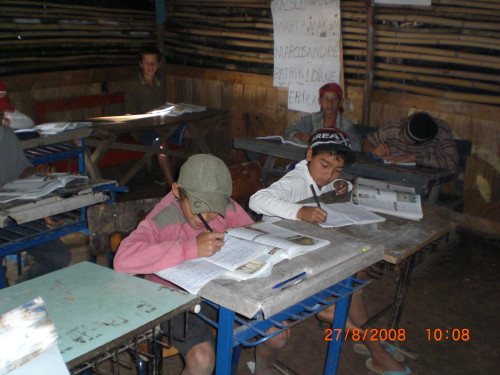 In February 2009, authorities in the state of Rio Grande do Sul, Brazil, prompted the closure of seven schools for the landless, claiming that they are being used by the MST to “develop a revolutionary ideology”, “defend socialism,” and “support intolerance”.

Leading up to this, “Gilberto Thums, a member of the Superior Council at the ministry in the state of Rio Grande do Sul responsible for education simultaneously attacked both the WSF and the landless movement MST. In a statement in the journal Expansão, he described the WSF as a meeting place for ‘terrorists and marginals’. A year or so earlier, in December 2007, Thums was behind a plan where a group of prosecutors would put MST on trial with the aim to ‘dissolve MST and declare it as illegal’,” explains a recent statement.

“The MST in Rio Grande do Sul was a pioneer twelve years ago in implementing a Brazilian law that supported schools in the countryside, and has become a model for the rest of the country. UNICEF Brazil have awarded the educational work which has developed due to MST as a model for education among children in vulnerable socio-economic conditions. The teacher’s union in Rio Grande do Sul has also awarded a prize to these schools. Almost 200,000 pupils attend the schools in the MST encampments and settlements. Slightly more than half of the schools are run on public money, and the rest voluntarily by MST,” the statement continues.

“MST is not only struggling for implementing agrarian reform and education in the countryside but is also engaged in work of importance to the survival of the planet. The 1.5 million participants in the movement are aiming at ecological agriculture. This work of theirs is a direct threat to transnational companies who wish to make profit from gene-manipulated plants and monoculture plantations for the cellulose and agrofuel industries.”

For instance, there is the Finnish-Swedish transnational company Stora Enso, one of the MST’s main opponents.

“To strengthen its political influence, Stora Enso has given financial support in the election to those political forces that are now trying to stop the landless movement and to make it impossible for MST to continue its struggle for agrarian reform. Governor Yeda, who has been directly supported by Stora Enso, has now declared – immediately after closing the schools of the landless – that everything should be done to help Stora Enso forest industry to get established in the state – ‘that is the road to development and we will not abdicate from that'”.