State of Mine: An investigation of Canada’s extractive industries 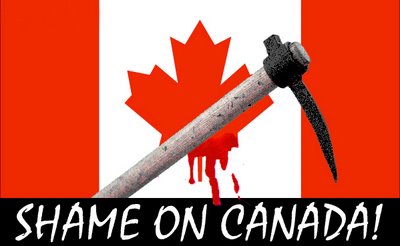 The Dominion Paper, a Canadian-based Grassroots News Cooperative, is in the midst of putting together a special November issue on Canadian mining, titled State of Mine: An investigation of Canada’s extractive industries.

The issue will consist of one original investigative article for every day of the month, and will provide a comprehensive look at all the stages of the industry and its impact on the environment, indigenous communities, human rights, labour, economics, gender, and art.

“It will be our most ambitious reporting project, and with 20,000 copies circulated, the biggest test of our growing grassroots distribution network to date,” notes the Dominion’s website.

It’s also going to be a bit of a test for Canadians, who are nowhere near as informed about the industry as they should be.

That is to say, Canadians are led to believe that there’s only a few ‘bad apples’ in Canada — companies that disregard human rights, the environment, and who defy all logic and reason to maximize their profits.

As long as they don’t try to step into our own backyards, it’s a story that most of us are pretty comfortable with. But it is just that, a story–and one that doesn’t even come close to reflect the reality of the industry and its participants.

The reality is this: Canada licenses, encourages and rewards corporations for engaging in destructive, coercive and down-right genocidal business practices across the planet.

In other words, the problem here is not simply a few bad apples, which is more like a few hundred. The problem is that they are allowed to grow in the first place, because of the morally and legally twisted tree that is Canada’s industry standards.

Once people start to realize this, which they most certainly will by reading through State of Mine, the Dominion is hoping that Canadians will be inspired to start a much-needed debate about the industry–and in turn, encourage its fundamental change.

This must happen. Not just for the hundreds of thousands of people around the world that are tortured, beaten, raped, kidnapped, murdered, poisoned, incarcerated, impoverished and displaced by Canadian companies, or even for the millions of acres of land that they steal, drench in toxic waste or otherwise destroy–but also for you.

After all, Canada’s extractive industry does what it does for you–with your money and in your name.

State of Mine: An investigation of Canada’s extractive industries