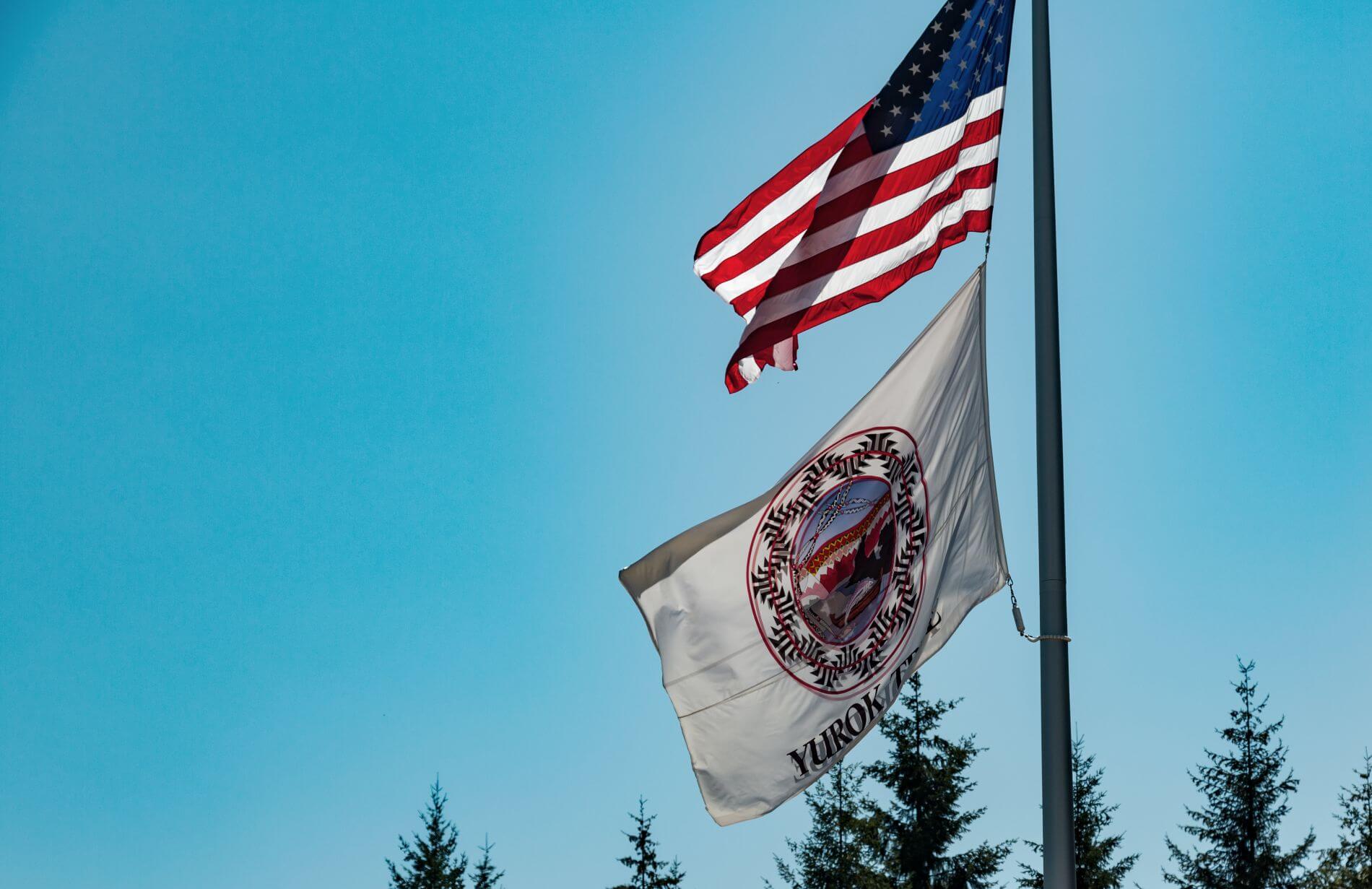 Standing up for the Land

A look at the Yurok tribe's efforts to combat the dangers of Genetically Engineered Organisms
The Yurok Tribe flag and American flag wave in the wind. Photo: Tony Webster/flickr. Some Rights Reserved
Support our journalism. Become a Patron!

The National Congress of American Indians

Facing a looming new threat to the already endangered salmon upon which its culture, society, and economy depend, the Yurok Tribe passed its Genetically Engineered Organism Ordinance, believed to be the first tribal law of its kind in the country. Enacted as a “preventative measure against future harm,” the ordinance is a necessary step to protect Yurok’s food sovereignty and ensure the spiritual, cultural, and physical health of its people. Through its community-driven legislative process, the Tribe also created a comprehensive Pesticide Ordinance, and is deploying ongoing public education campaigns to effectively enforce both laws.

The Yurok people in northern California have enacted their solemn obligations as “World Renewal People” since time immemorial, a fact codified in the Yurok Tribe’s constitution. The Tribe fulfills these obligations by exercising its inherent sovereignty to “restore, enhance, and manage the tribal fishery, tribal water rights, tribal forests, and all other natural resources,” and “preserve forever the survival of our Tribe and protect it from forces which threaten its existence.” Central to this existence is the salmon of the Klamath River, which is vital to the Tribe’s spiritual, cultural, and physical sustenance.

For millennia, the Yurok ably carried out these obligations, caring for the natural world around them in a deliberate, holistic manner. In the mid-1800s, however, settlers rushing into Yurok territory seeking gold and other valuable natural resources disrupted Yurok’s ability to serve as the exclusive stewards of their place. Meanwhile, the State of California attempted to outlaw subsistence fishing by Yurok people on the Klamath River, which sparked legal battles and violent conflicts that continued through the 1970s and 1980s. Much of Yurok’s once vast ancestral territory quickly passed into non-Native hands; the remaining fraction that became the Yurok Reservation today is predominantly owned by non-Natives, notably a large private timber company.

The invasion of non-Natives into Yurok territory “shattered” the delicate social and ecological balance the Yurok people had spent thousands of years maintaining. Overfishing, excessive timber harvesting, widespread habitat destruction, and declining water levels caused by prolonged droughts and area agricultural operations have placed in great jeopardy the salmon that rely on the Klamath River for their survival. Recently, critically low runs left Yurok no choice but to cancel its commercial fishery on the Klamath for three consecutive years to give the local salmon population the best chance of regenerating. The lack of a commercial fishery not only hurts the ability of many Yurok families to make a living and put food on the table, it “undermines the tribe’s ability to pass on cultural and religious traditions to the next generation.” 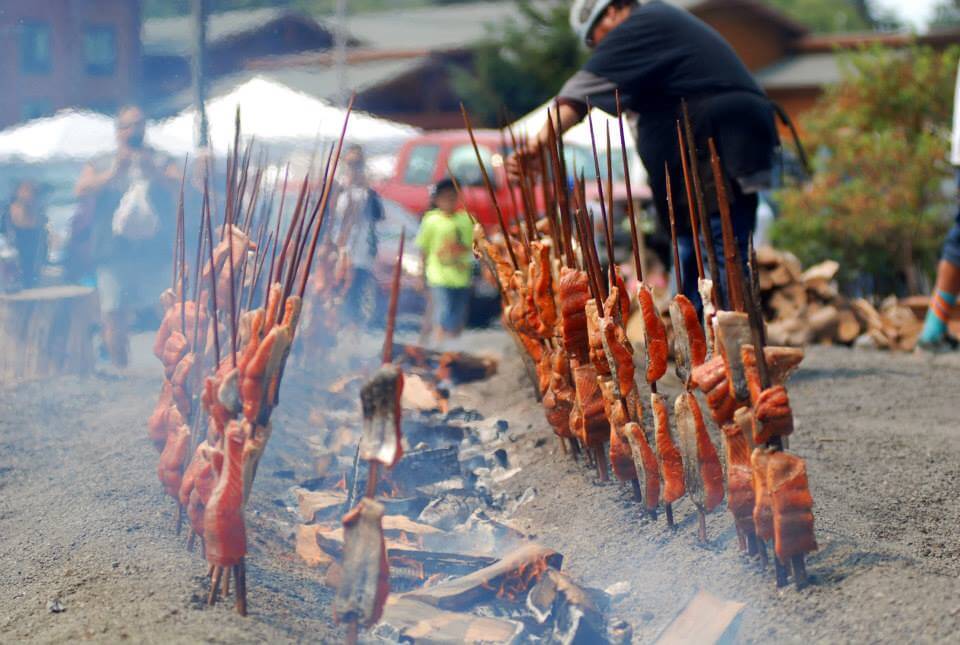 Despite these challenges and the other governments they must contend with, Yurok has worked tirelessly to reclaim their rightful role as stewards of the Klamath River basin ecosystem. Notably, the Tribe forged strategic partnerships with local farmers and other stakeholders to establish a landmark agreement with the states of California and Oregon and the utility company PacifiCorp to undam the Klamath River by the year 2020, which will greatly enhance the ability of the salmon to easily travel far upriver to spawn. In addition, a 2017 court order now requires the U.S. Bureau of Reclamation to regularly increase winter and spring water flows into the Klamath River “using the Tribe’s scientific recommendations” to “markedly reduce [disease] infection rates among young salmon.” Despite these achievements, the Tribe still faces a long road ahead.

“We felt like we had to draw a line in the sand and say, ‘No, this is where it stops. You can have your hatchery, you can build a swimming pool in your backyard and have as many Frankenfish as you want, but not in our backyard.’”
Abby Abinanti, Chief Judge, Yurok Tribal Court

And Yurok’s mission to return the salmon to vibrancy became even more daunting with the emergence of a potential new danger in its midst: “Frankenfish,” a term describing genetically modified or engineered (GMO/GEO) salmon. For years, tribal nations reliant on wild, natural salmon for their physical and cultural sustenance have been deeply concerned about these Frankenfish breeding with and ultimately destroying the genetic integrity of wild salmon populations. Two recent developments have elevated the urgency of this threat. In 2015, the U.S. government deemed genetically engineered salmon safe to eat, bolstering the aquaculture industry’s efforts to profit from the large-scale farming of these fish. Then, in 2017, a netted enclosure collapsed in Puget Sound, releasing thousands of genetically engineered salmon into its waters. The incident prompted several Puget Sound-based tribal nations to declare a state of emergency and assist with clean-up efforts. In Yurok’s estimation, if unchecked, the Frankenfish will inevitably “overrun” the natural wild salmon “and they will become the fish on the river, and for us that’s not acceptable.”

To start, tribal staff secured the Council’s permission to initiate a process to craft a tribal ordinance to address the genetically engineered salmon issue. Then, with assistance from the Northern California Tribal Courts Coalition, the Tribe researched the efforts of other tribal nations to combat the dangers posed by Genetically Engineered Organisms, not just salmon but genetically modified crops such as corn and wild rice. Through this endeavor, it became apparent that if Yurok was to effectively defend the river against genetically engineered salmon, its approach would need to involve the entire tribal government, working in lockstep with Yurok community members. So the Council created a work group comprised of a cross-section of governmental entities to develop the ordinance, including the Office of the Tribal Attorney (OTA), Yurok Tribal Courts, Yurok Tribe Environmental Program (YTEP), Yurok Tribal Fisheries Department, and the Yurok Department of Public Safety (DPS).

In accordance with Yurok’s Public Hearings Ordinance, the work group then conducted widely publicized public meetings over several months to inform tribal members about the proposed ordinance. Through several rounds of drafts and revisions, tribal members continually provided feedback, and a specially appointed culture committee composed of elders reviewed the drafts to ensure that traditional Yurok ecological knowledge, values, and practices gained their rightful place in both the ordinance’s language and its implementation.

This process culminated in 2015 with Yurok’s passage of its Genetically Engineered Organism Ordinance, believed to be the first tribal ordinance of its kind in the country. Enacted as a “preventative measure against future harm,” the comprehensive ordinance: declares the reservation will be “kept free from genetically engineered or modified seeds, plants, fish, and animals”; prohibits “any person, corporation, or entity from propagating, rising, growing, spawning, incubating, or releasing genetically engineered organisms within the territory of the Tribe”; designates the Yurok Tribe Environmental Program, Yurok Department of Public Safety, and the Office of the Tribal Attorney to coordinate enforcement; and enables the Yurok Tribal Court to prosecute offenders and recover from them any costs associated with enforcing the ordinance.

“We are back to the time of the tribes on the river again. We are reclaiming that governance now.”
Amy Cordalis, General Counsel, Yurok Tribe

In addition to the reservation, the ordinance applies to “any off-reservation conduct that causes material on-reservation genetic trespass or contamination” by Genetically Engineered Organisms. As Yurok’s leadership explains, the ordinance is necessary “to protect our food sovereignty and to ensure the spiritual, cultural, and physical health of the Yurok People. Genetically modified food production systems, which are inherently dependent on the overuse of herbicides, pesticides and antibiotics, are not [in] our best interest.”

Pesticides have long plagued Yurok, but recently their impacts have grown more widespread and severe. The number of illegal cannabis grows increased dramatically in the hardest-to-reach parts of the reservation over a recent several-year period, and with them the pesticides used to enhance their cultivation. These toxic substances run off into Yurok’s waterways, endangering the physical health of Yurok members, in particular youth, elders, those who are sick or have suppressed immune systems, and the many Yurok people who engage in subsistence fishing, hunting, and gathering. These unlawful grows also damage critical fish and wildlife habitat by diverting vital cold water from Yurok’s waterways, and they often interfere with Yurok ceremonies and ceremonial areas. In addition, many Yurok hunters and gatherers have been discouraged from engaging in these subsistence activities in their usual and accustomed places, fearing they will encounter armed cannabis growers.

Since its creation of these ordinances, Yurok has been hard at work implementing them. Notably, the Tribe is expanding its human resource capacity to administer these laws and monitor the fish populations’ health, so that Yurok’s management plans and associated ordinances are synchronized and based upon the best available science. Yurok also has launched ongoing, comprehensive public education campaigns to inform tribal members, local residents, and other area governments and stakeholders about the new laws. For example, the Tribe has partnered with the Yurok Economic Development Corporation to educate tribal members about everyday household chemicals that are considered banned toxic substances under the Pesticide Ordinance and how to dispose of them. It also is working with local businesses to gradually phase out the sale of these chemicals in favor of safer alternatives. In addition, Yurok Tribe Environmental Program, Yurok Department of Public Safety, and Office of the Tribal Attorney are methodically developing a unified plan that will support seamless enforcement of these ordinances and the efficient routing of offenses through Yurok’s court system. Altogether, as Yurok explains, “When these ordinances are fully in place, we’ll be able to say with conviction, ‘No, these are not allowed in our lands, this is why, and these are the consequences.’ As a result, we’ll start seeing a healthier community, a healthier river, and we’ll see salmon back in the Klamath.”

National Congress of American Indians’ Partnership for Tribal Governance partnered with the Yurok Tribe to develop an in-depth case study of this tribal governance success story, which this op-ed excerpts. To read the case study, please click here.

To learn more about the Yurok Tribe’s implementation of its GEO and pesticide ordinances as well as its other efforts to protect its land and natural resources for future generations, click here.