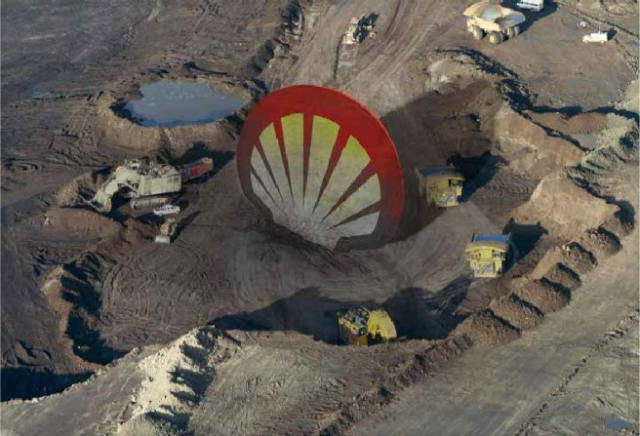 Stand With the ACFN to Stop Pipelines At the Source

Graphic from "Shell Risking Ruin" report by IEN and ACFN
Support our journalism. Become a Patron!

Article Cross Posted from It’s Getting Hot in Here

Any fight against the pipelines and tanker projects in BC must be rooted at stopping them at the source—the Alberta Tar Sands. On Tuesday, October 23rd we will be standing with the Athabasca Chipewyan First Nation (ACFN) as they challenge Shell’s proposed expansion of the Jackpine Mine.

They have filed a constitutional challenge, “citing lack of adequate or meaningful consultation and that the application would have adverse impact on their treaty rights” says a press release put out by the ACFN. It continues to explain that, “the application calls for the mining out of 21 km of the Muskeg river, a river of cultural and traditional significance to both the people and wildlife in the area.”

This challenge is even more significant given that just yesterday the Conservatives rolled out a new version of the budget bill, Bill C-45, which further undermines Treaty rights and environmental legislation in Canada. In particular, the bill would weaken the Navigable Waters Protection Act, consequently weakening protection of the Muskeg river and making it easier for the expansion to be approved.

The ACFN are hosting a rally and a pipe ceremony on the first day of the constitutional challenge and are  asking supporters to join them in Fort McMurray, Alberta. To learn more about how to get there from Edmonton, email chelseaf@sierraclub.ca. Council of Canadians will be there to support all of the day’s events. For more information on what is planned, check out Stop Shell Now’s event page, here.

Following these projects, Council will continue on its six-day No Pipelines, No Tankers Speaking Tour, stopping in communities on or near the routes of the Pacific Trails, Enbridge Northern Gateway, and Kinder Morgan Trans Mountain Pipelines.

“The idea is to build solidarity between the different pipeline campaigns,” says Harjap Grewal, Pacific Regional Organizer of the Council of Canadians. This includes campaigns to stop the pipelines at their source—in the Alberta Tar Sands and Fracking region in northeastern BC. Pipelines planning to bring fossil fuels to BC’s coast for international markets are being fought as individual projects, when they are all part of a larger agenda to secure profits for corporations and oil- and gas-friendly governments.

“If these and other pipelines are allowed to be built, there will be no incentive in the foreseeable future to cut back on the production of fossil fuels and convert to the clean energy future we and the planet need. These pipelines are not only the arteries carrying the dirtiest oil on Earth, they become the drivers of an expanded industry as there will be relentless pressure to keep them full. We must and will stop these pipelines,” says Maude Barlow.

The lineup of speakers include Maude Barlow, Bill McKibbon, Caleb Behn, Rueben George, and many others who will be speaking in numerous cities beginning on Tuesday, October 23rd.

For full information on speakers, locations, and times, please visit the No Pipelines, No Tankers Solidarity Speaking Tour site.