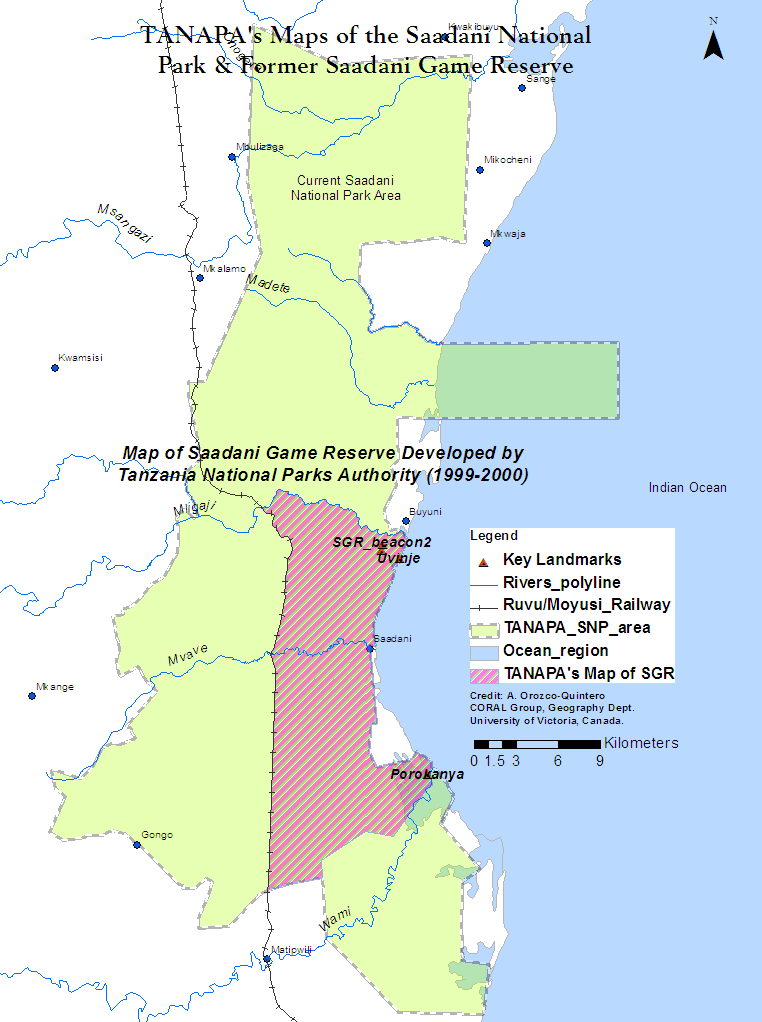 A Spatial Analysis of Land Expropriation in the Name of Conservation

In this and a second upcoming article, using spatial, document and qualitative analyses[i], I will examine (using 1650 words) the spatial and institutional provisions leading to the creation of Saadani Game Reserve and later the national park, and the current status of alleged illegal habitation by Saadani villagers in their own ancestral lands. This is done in order to provide bite-size facts on the case and to encourage further analyses (by the media, HR and other organizations, conservationists and like minded citizens) of the implications of the case for sustainable conservation. The present article concentrates on the spatial features of the Saadani case.

Conservation interventions in the Saadani landscape on the coast of Tanzania have taken place since the mid-1960s, but it is only recently that state-managed conservation has become a growing concern among the villages adjacent to the park. Presently, at least 11 adjacent villages have disputes with the park, while no less than half on them are engaged in higher level advocacy to demand the reassessment of park boundaries. Of all of the park’s 17 adjacent villages, however, it is Saadani village itself—the village after which the park was named—where the stakes are perhaps highest: two of its coastal sub-villages’ lands have been unilaterally gazetted as park lands.

In the 1960s, Saadani village, including its sub-village Uvinje, invited the Wildlife Division to help them to conserve the wildlife being indiscriminately killed by outsiders. A partnership emerged and Saadani Game Reserve (SGR) was officially gazetted in 1974 with the full support of Saadani village, which willingly gave up some of its land for the Reserve. The partnership that lasted for three decades honoured central agreements on respecting communal tenure in Saadani’s inhabited lands and on the involvement of villagers in addressing the tourism potential.

From Game Reserve to National Park

In the late 1990’s the Tanzania National Parks Authority (TANAPA) came in to “upgrade” the Game Reserve to a national park. However, by all accounts, it seems that in doing so the agency re-drew the SGR boundaries to include the totality of Uvinje and Porokanya, two of Saadani’s sub-villages, as well as part of the Saadani Village centre, in the new park, an action accompanied with a persistent allegation before higher level authorities that the said coastal lands have always been a part of the reserve. Park establishment records nowhere suggest that the original reserve boundaries would be changed, just that other areas to the North, South and West of the reserve would be added in order to create the national park. Figure 1 shows maps of the SGR and Saadani National Park. TANAPA’s map of the SGR (created between 1998 and 2000) was then used to approve the park proposal at District and higher levels. Since the early 2000s when they became aware of TANAPA’S argument that their land has always been within the reserve, leaders from Uvinje and Saadani sent numerous communications to government at all levels, consistently reiterating that they have never been a part of the Reserve. However, such communications seem to have been overlooked by relevant authorities, who gave the go-ahead to gazette the lands for the park using TANAPA’s map of the SGR. The park was gazetted in 2005.

Documents clearly laying out the boundaries of the game reserve and later the park are hard to come by. What is clear is that different official versions of the boundaries exist with no documentation transparently explaining when, how or why they changed. However, the SGR Map, reconstructed as part of the 2013 spatial research, drawing on the gazette notice for the reserve from 1974 and the GPS coordinates of two concrete SGR beacons demarcating part of the original reserve boundary, shows that an additional 8.3 km2 (comprising the totality of Uvinje’s land) was added to the park by TANAPA. This includes a unique 5.5 km long strip of beach and access to freshwater – a rarity on the Saadani coast. Spatial analysis conducted for this research makes it clear that the SGR never included the prime coastal sub-village areas comprising Uvinje and Porokanya. 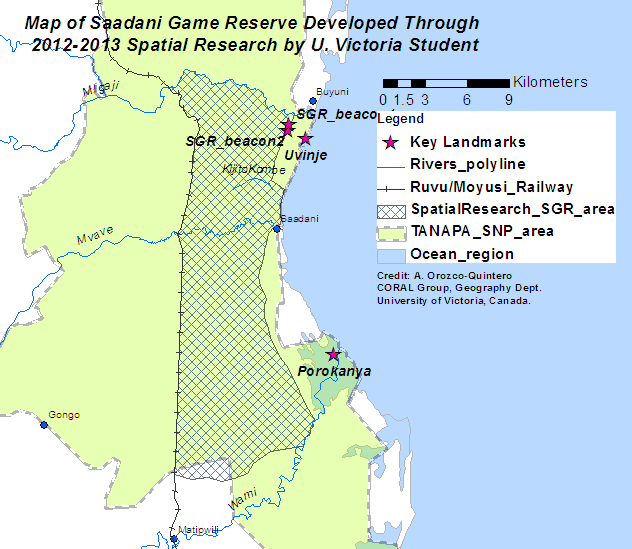 Figure 2. Map of the SGR based on the official 1974 reserve gazette and 2 boundary beacons demarcating the original reserve boundary. 2013 Research, University of Victoria.

Meanwhile the other area gazetted by TANAPA (covering part of Saadani village centre and Porokanya’s sub-village) is comprised of about 30 km2 of equally prime coastal territory. In total, of the close to 50km2 which Saadani village leaders kept for habitation by coastal villagers at the time of the creation of the reserve, based on TANAPA’s current map of Saadani National Park[ii], the total area comprising Saadani’s coastal village lands remaining are now only 12km2, and part of this is made up of areas that are seasonally flooded. These findings, moreover, are consistent with research carried out by the Institute for Resource Assessment at the University of Dar Es Salaam which was commissioned by the Wildlife Division itself in 1996. The University of Dar Es Salaam research shows that SGR only included 2.5 km of beach line situated North of Saadani Village centre, between Mvave and Kijitokombe rivers. Moreover, both University of Dar and the doctoral research corroborate the accounts of Saadani village elders. Figure 2, 3 and 4 show the various maps of the Saadani Game Reserve[iii]. Poor village records, the death over time of knowledgeable village elders who were involved in establishing the Game Reserve, and TANAPA’s creation of its own map have provided the perfect scenario for TANAPA to take ownership of these culturally, socially, and economically important village lands. 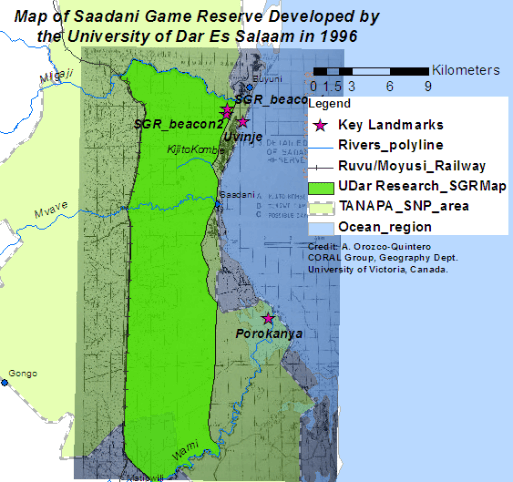 Figure 3. Map of the SGR from research commissioned by the Wildlife Department to the University of Dar Es Salaam researchers in 1995, 4 years before TANAPA’s map of the reserve was created. 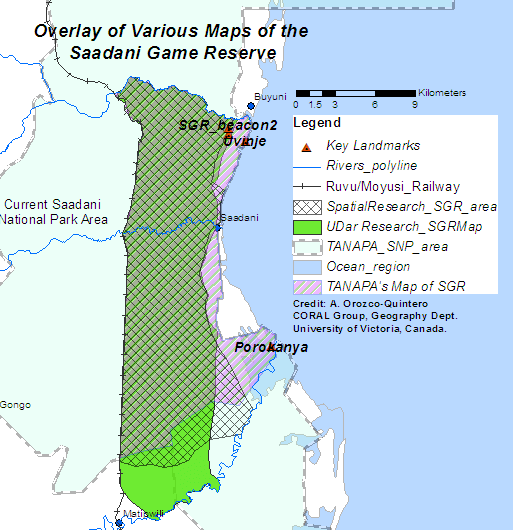 Figure 4. Overlay of all maps of the SGR, TANAPA’s version of the eastern (coastal) boundary of SGR map sharply contrasts with the 1996 UofDar and the 2013 UofVictoria maps of the SGR. Figure 2. Map of the SGR based on the official 1974 reserve gazette and 2 boundary beacons demarcating the original reserve boundary. 2013 Research, University of Victoria.

For the Sake of Conservation?

Other spatial data, based on the 2002 TZ National census, further helps to understand the scope of Saadani’s stewardship in addressing wildlife conservation. Such spatial data suggests that the original extent of the Saadani village was of close to 300km2. Of this, the doctoral research shows that close to 170 km2 were given in the 1960s by village elders for the creation of the reserve. Then, in the early 2000s Saadani village leaders gave almost 100% of the rest of its inland territory, not realizing at such early stage that TANAPA would go ahead gazetting, without their knowledge, most of their coastal lands as well. Figure 5 provides a close view of the former territory of Saadani village and the current extent of land left by TANAPA for their habitation. 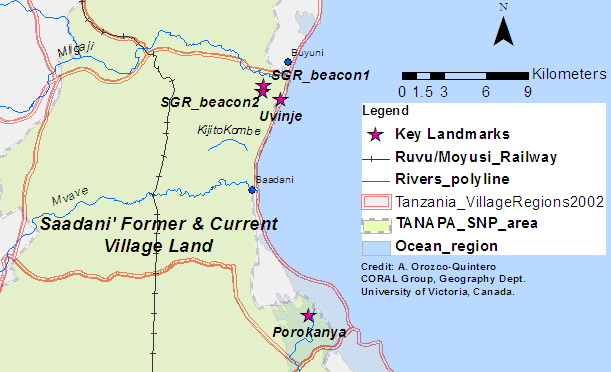 Figure 5. Extent of Saadani’s village lands before the SGR and the SNP were established, and extent of land (white) left after the creation of the SNP in 2005. Village lands spatial layer: http://www.tzgisug.org/wp/

Not a single document presented to various authorities in the processes of creating the park stated the amount of land left to Saadani villagers, neither was TANAPA’s map of SGR shared at the village level. However, because of the visibly small remaining piece of village land, which was noticed by higher level authorities, TANAPA made the commitment to provide a 1.5km buffer area from the East border of their map of the reserve (around the Saadani village centre). Yet, this commitment is still to be honoured.

Presently, residents of Uvinje sub-village are in the process of being evicted. Leadership crises at the village level, together with the scope of TANAPA’s actions, have so far prevented a just resolution to this land grab for “conservation”. As the situation is approached now, it would seem that TANAPA’s attitude is that Uvinje and Porokanya villagers need to be removed from this land at all costs for the pursuit of state-based conservation and the establishment of beach resorts. Despite multiple efforts to share the findings of this and other corroborating research, the villagers’ fate to be extirpated from their traditional territory seems to be set, notwithstanding their bold efforts for environmental conservation.

[i] Facts emerging from research on The Role of Knowledge, Institutions and Multi-level Governance in Adaptive Capacity within and around Saadani National Park in Tanzania.

[ii] This calculation is based on one of the two maps of the park used in the SNP 2010-2020 General Management Plan. The other map of the park, also included in the plan, shows an even smaller area of land left for Saadani villagers. An equally relevant fact is that despite being created in 2005 and with the support of international conservation organizations http://www.calameo.com/books/0035385505262253b7efc, the official gazette of the park http://www.calameo.com/books/0035385501ca27e72f236 is lacking both a map and a total area. It only includes various coordinate points to describe the boundaries of the park.