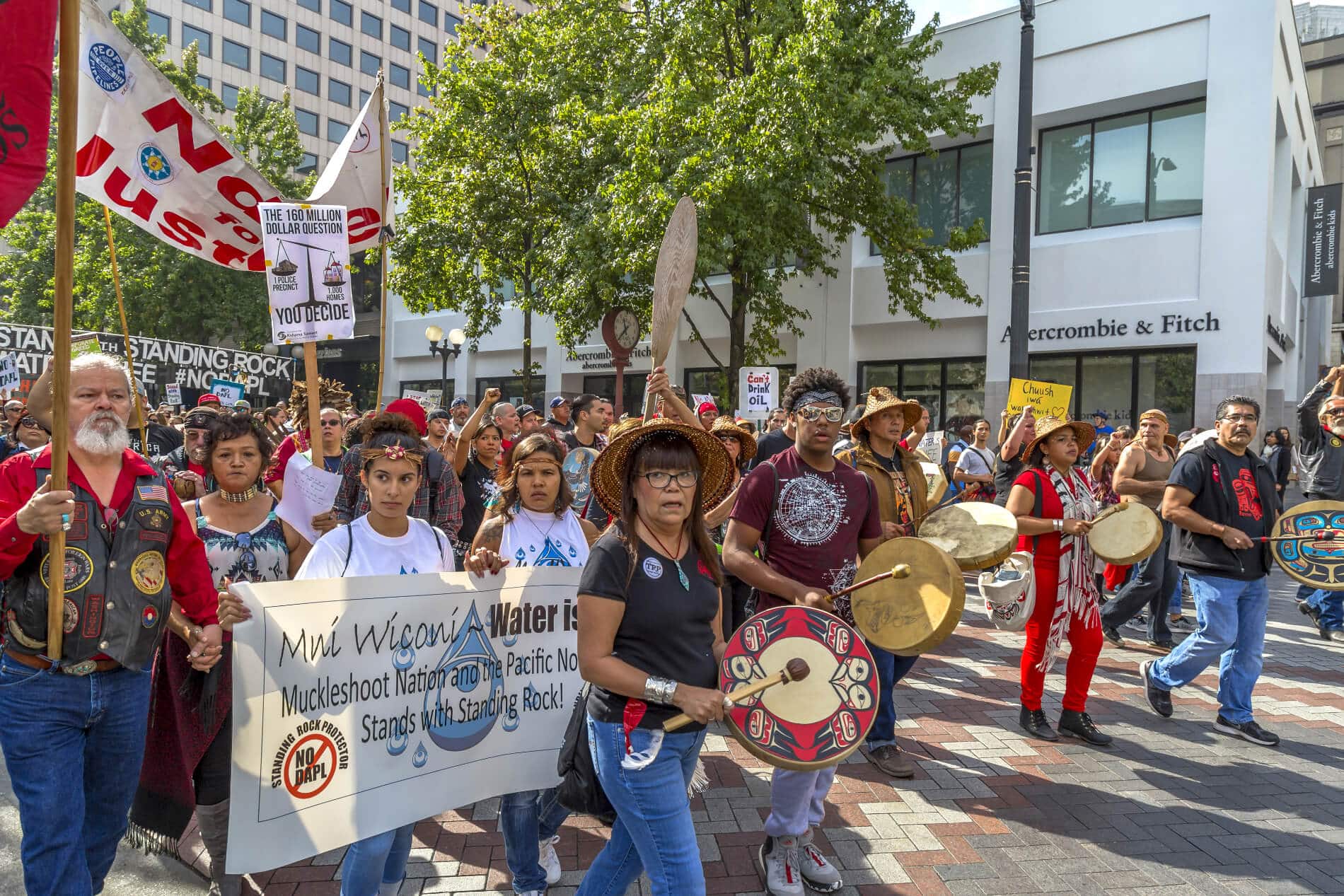 SIOUX FALLS, S.D. — South Dakota Governor Kristi Noem and Attorney General Jason Ravnsborg yesterday backed down from their unconstitutional attempts to silence protesters. Under a settlement agreement, which was submitted for court approval yesterday, the state agreed to never enforce current state laws that prohibit protected speech and are aimed at suppressing protests against the Keystone XL pipeline. The settlement will make permanent an earlier federal court ruling that temporarily blocked enforcement of unconstitutional provisions of the anti-protest laws.

The agreement comes in a lawsuit filed by the American Civil Liberties Union, the ACLU of South Dakota and the Robins Kaplan law firm on behalf of four organizations: the Sierra Club, NDN Collective, Dakota Rural Action, and the Indigenous Environmental Network; and two individuals: Nick Tilsen with NDN Collective and Dallas Goldtooth with Indigenous Environmental Network. All are currently protesting or planning to protest the Keystone XL pipeline and/or encouraging others to do so.

The lawsuit challenged unconstitutional provisions of several South Dakota laws, including the “Riot Boosting” Act, that threatened activists who encourage or organize protests, particularly protests of the Keystone XL pipeline, with fines, civil liabilities, and/or criminal penalties of up to 25 years in prison.

In September, U.S. District Judge Lawrence L. Piersol found the anti-protest provisions of the laws unconstitutional and temporarily blocked state officials from enforcing them. Under the terms of the settlement, Noem and Ravnsborg will send a letter to the state’s attorneys in each county, telling them to direct law enforcement in their jurisdictions not to enforce the unconstitutional provisions of the laws. They will also compensate plaintiffs for attorneys’ fees.

“South Dakota knew these laws couldn’t stand up to our legal challenge so rather than face embarrassment they decided to capitulate. We will celebrate this win, but remain vigilant against further government attempts to outlaw our right to peacefully assemble. We will fight on for the protection of the Oceti Sakowin people and the sacredness of Mother Earth with no hesitations.”

“By equating peaceful organization and support of protest with ‘riot boosting’ and incitement to riot, the government stifled our clients’ abilities to speak out against the Keystone XL Pipeline. We’re happy that the state recognized that these vague and overbroad laws threatened the First Amendment rights of South Dakotans on every side of the issue and that, as a result of this settlement, no one’s voices will be silenced.”

“We’re glad the state has backed down in its oppressive attempts to criminalize free speech. These laws clearly represented an unconstitutional attack on South Dakotans’ right to peaceful protest, and it’s a relief to know that they’ll never be enforced.”

“The ‘riot boosting’ act was an insult to the Constitution and an attempt to muzzle the voices of the people and our movement to defend Mother Earth. This settlement accomplishes everything that we set out do with the lawsuit and makes the temporary injunction a permanent one. Onward, we will continue to fight for air, land, water and our rights.”

“Gov. Noem and Attorney General Ravnsborg settled this case because they are clearly in the wrong – something they and the Legislature were warned of as they rushed to pass this unconstitutional law. In fact, the whole process of pushing pipelines through this state – from the use of eminent domain to benefit a foreign corporation, to cracking down on citizens protecting the land and water – violates our constitution and leaves taxpayers, once again, to foot the bill. We are proud to have stood alongside our Native allies to fight for the rights of all South Dakotans, and we thank the ACLU for their work on this crucial case.”

Additional information about the ACLU’s First Amendment challenge to South Dakota’s anti-protest laws is available on the ACLU’s website.