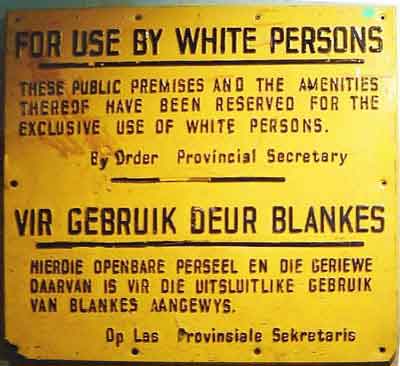 The US Supreme Court affirmed a ruling on Monday that three class action lawsuits filed on behalf of South African apartheid victims can be tried in the American legal system.

Combined, the lawsuits are seeking more than $400 billion from nearly 50 multinational companies for ‘allegedly’ aiding and abetting the South African military and security forces.

The corporations named in the lawsuits include: ExxonMobil, UBS, Deutsche Bank, General Motors, IBM, Hewlett-Packard, Bank of America, General Electric, BP, Citigroup, and Ford. (NB: some of these companies were also invested in Nazi Germany. I’ll let you guess which ones. )

“The three class actions are believed to represent thousands of South Africans who suffered under apartheid between 1948 and 1994. One set of plaintiffs – a South African human rights organisation called the Khulumani Support Group – said that it had 32,700 members who were survivors of apartheid violence,” notes the TimesOnline UK.

Speaking to The Times, Michael Hausfeld, the lead counsel for the Khulumani group, which is based in Washington, said: “We want a legal acknowledgement of accountability, that these international corporations knowingly helped the regime violate human rights.

“A ruling in our favour would have two possible impacts. It would force the companies to pay compensation to those who were injured as a consequence of the abuses they suffered. It would also trigger a change in corporate governance.”

A bit of background: The lawsuits were first filed in 2002, but they were thrown out on the grounds that the US has no jurisdiction.

This would have been true, were it not for the somewhat obscure and highly controversial the Alien Tort Claims Act (ATCA), which grants jurisdiction to US Federal Courts over “any civil action by an alien for a tort only, committed in violation of the law of nations or a treaty of the United States.”

The Supreme Court made its ruling based on the ACTA.