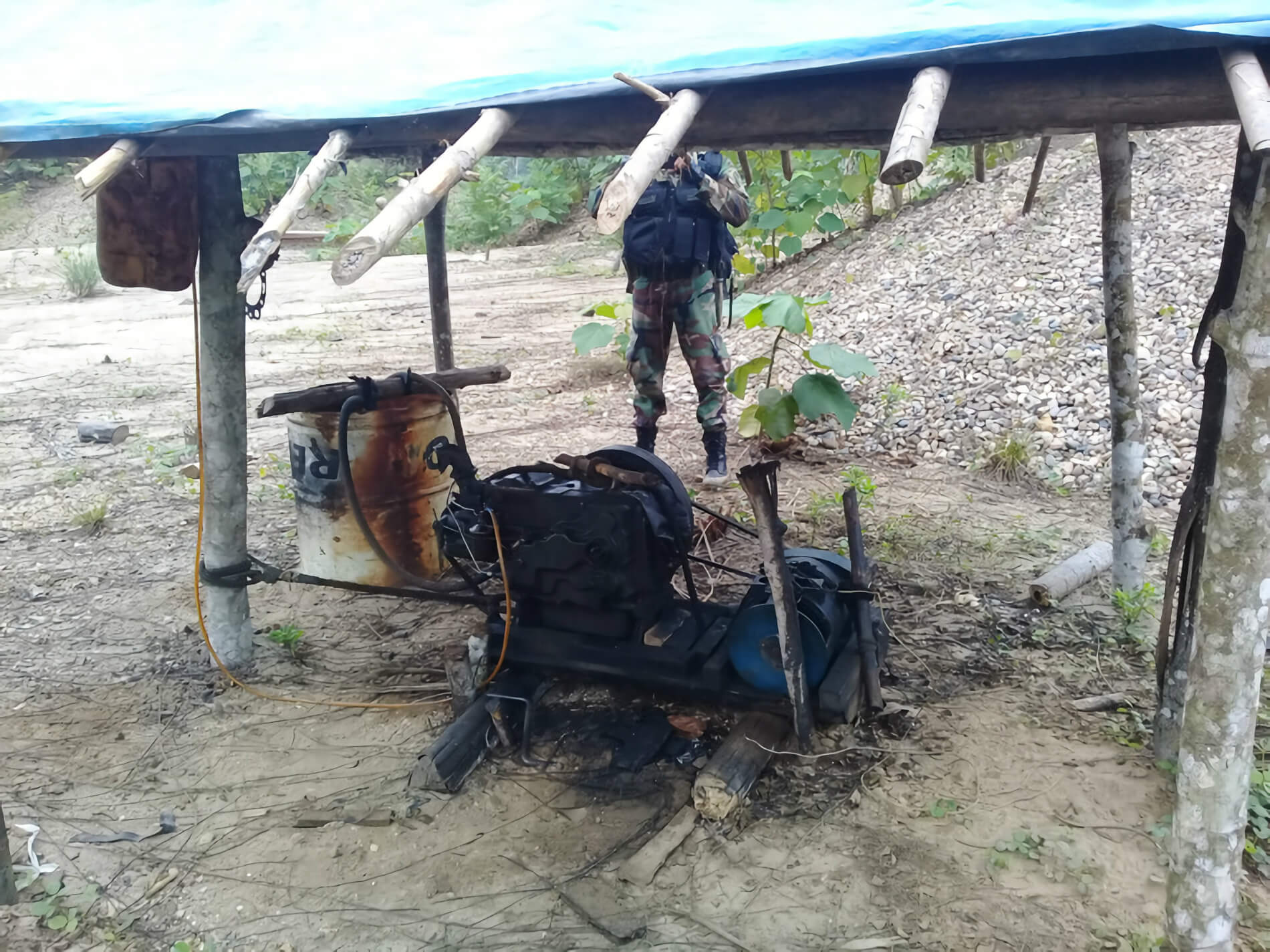 Using a system called ForestLink developed by Rainforest Foundation UK, members of the Masenawa community documented the presence of an illegal gold mining camp in the Madre de Dios region of Peru. The police then responded by destroying the mining equipment at the camp and arresting five people suspected of participating in illegal mining. The biodiverse Madre de Dios region of the Amazon has been besieged by illegal gold mining, which has caused widespread deforestation.

Five people suspected of illegal gold mining in Peru are in custody after indigenous community members used a system called ForestLink to alert authorities to the activity.

“Communities are the natural guardians of the Amazon,” Rosa Baca, who works for a Peruvian indigenous group called FENAMAD, said in a statement. “Technologies like ForestLink are helping indigenous peoples to protect the rainforest from illegal mining, even in areas outside their titled lands.” 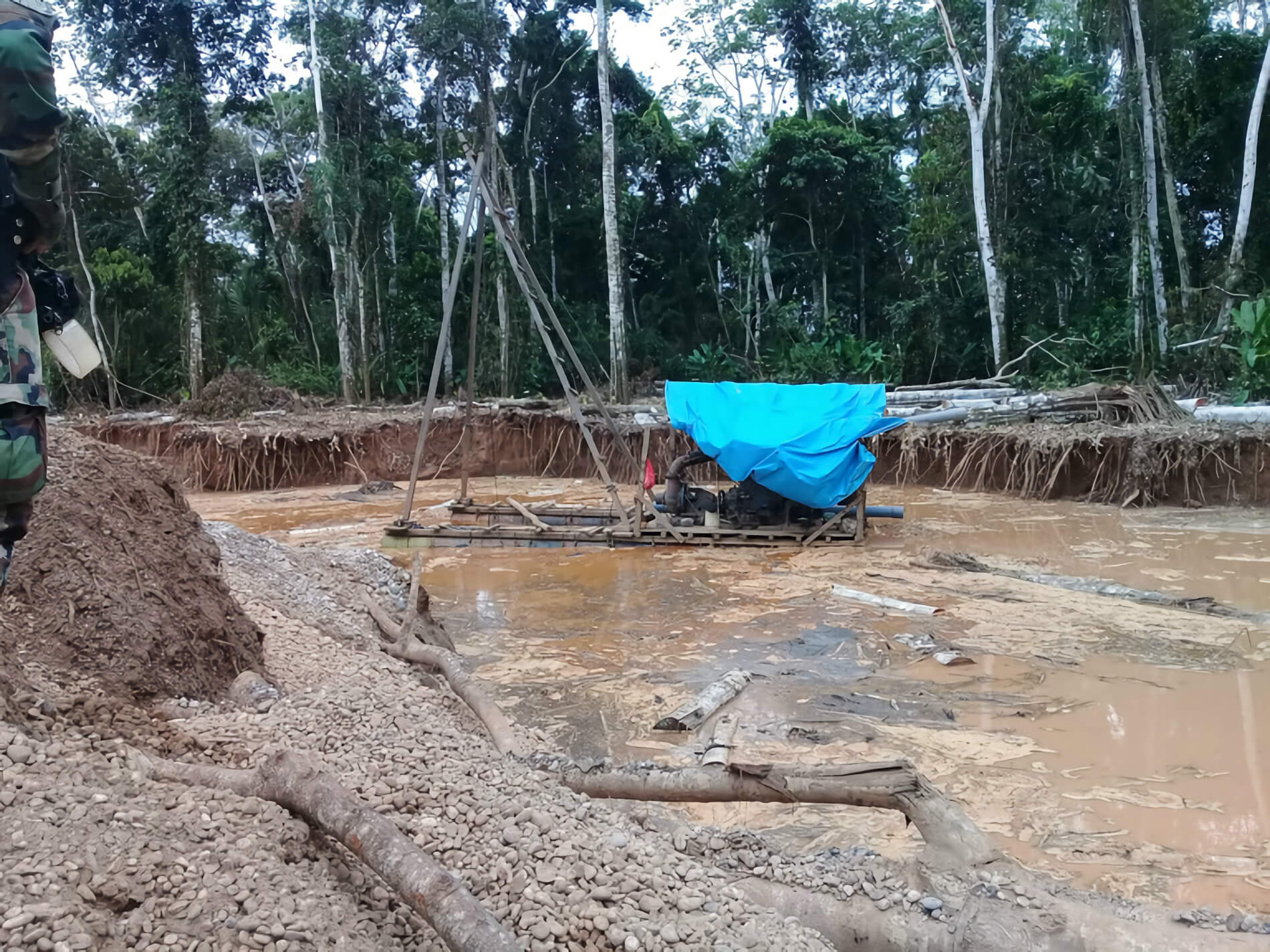 The illegal gold mining camp that the indigenous community members discovered was situated not far from the Amarakaeri Communal Reserve. Image courtesy of FENAMAD.

After members of the Masenawa community in the Madre de Dios region of the Peruvian Amazon discovered a mining camp, they documented its presence and sent the evidence by satellite link to FENAMAD — short for Federación Nativa del Rio Madre de Dios y Afluentes.

Madre de Dios is one of the country’s richest repositories of biodiversity. But its forests have also come under siege in recent years as gold miners — some 30,000 in 2015 alone — have moved into the area, where they illegally collected $15 billion worth of gold between 2003 and 2014. In the miners’ wake, they often leave felled forests, muddied waterways and lands scraped of their topsoils.

To tackle these types of issues, which typically occur far from the oversight of government authorities and conservation NGOs, Rainforest Foundation UK (RFUK) developed the ForestLink system and has worked with groups like FENAMAD to get the technology into the hands of the people living in and near the forest, such as the Masenawa.

The capability to connect with a satellite link allows “real-time monitoring” of remote areas. Groups in Central Africa, as well as Peru, now have the technology. And sending the alerts costs only about as much as sending a text message, according to a video by RFUK.

Once FENAMAD had proof that miners were working in the area, not far from the Amarakaeri Communal Reserve south of Manu National Park, they shared the information with government authorities. Police then traveled to the location and used explosives to destroy the heavy machinery at the camp.

“What this intervention shows is the power of harnessing technology for social good and putting it in the hands of local people, who are on the frontlines of the fight against deforestation,” Aldo Soto, RFUK’s Peru and Andean Amazon coordinator, said in the statement.

Carmen Irey Cameno, the community’s president, has spoken out against gold mining in the region, and she condemned this latest evidence of the flood of miners into Madre de Dios. But that advocacy on behalf of the forests the Masenawa call home has come at a cost. It’s resulted in threats to members of the group, as well as the beating of two of Cameno’s family members, according to Rainforest Foundation UK.

“It’s alarming to see environmental defenders threatened and intimidated in this way,” Soto said. “At the same time, the determination of Carmen and her people in protecting their environment is truly inspiring.”