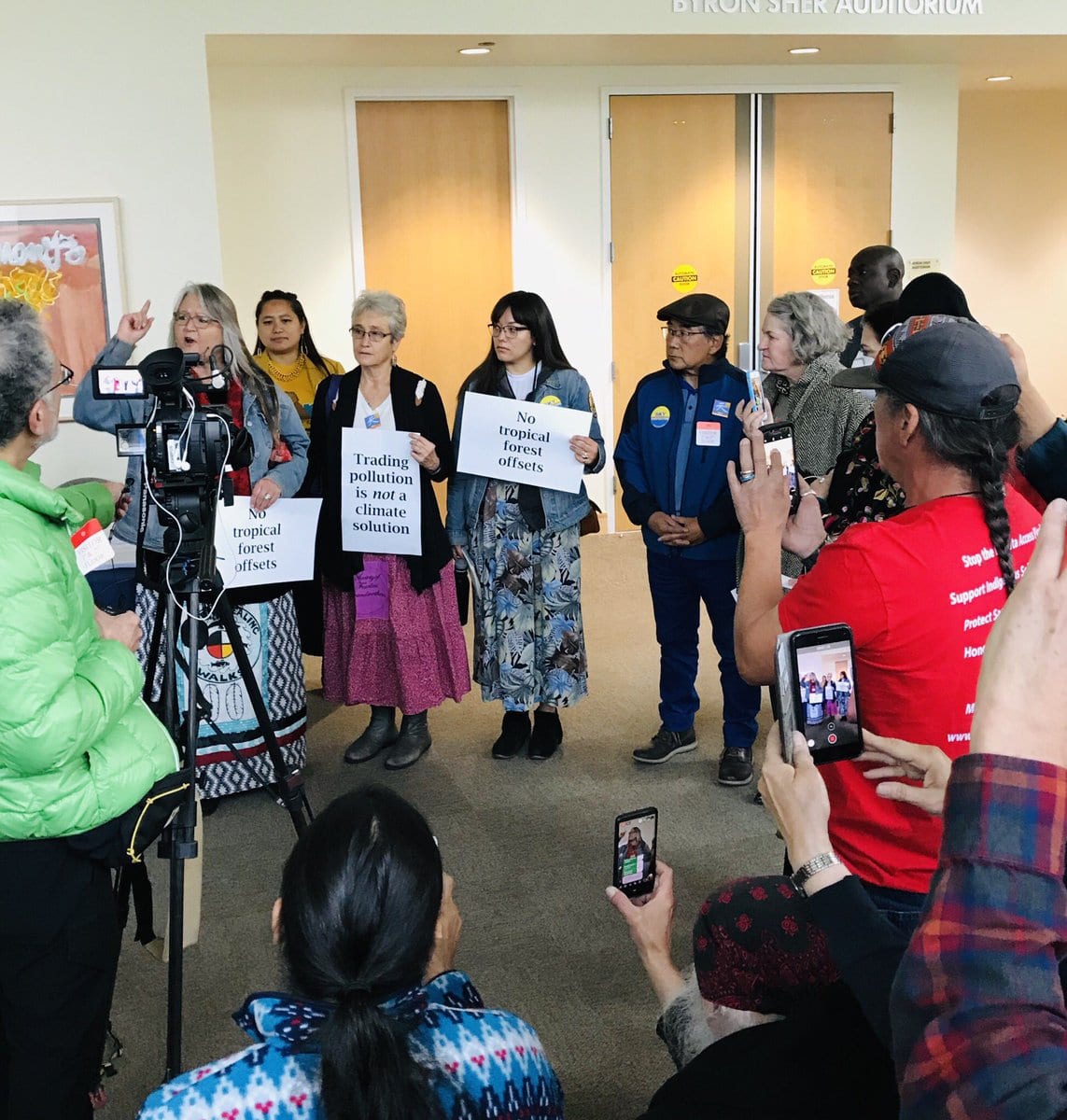 In a marathon hearing of the California Air Resources Board, Sky Protectors’ eloquent testimonies played a significant role towards blocking the vote on the so-called Tropical Forest Standard until April 2019.  Blocking the adoption of the Tropical Forest Standard, temporarily protects world’s tropical forests and their guardians from a false solution to climate change called forest carbon offsets. The Sky Protectors also temporarily stalled momentum for the airlines industry, the United Nations and carbon markets all over the world to use such forest offsets, which often are generated by evicting Indigenous Peoples and local communities from their land and territories.

The Sky Protectors delegation’s representative from Africa, Dr. Asume Isaac Isuoka, Director of Social Action, Nigeria denounced that “California’s Tropical Forest Standard is colonialism pure and simple. In Nigeria, carbon offset projects have resulted in the militarization of forests in Cross River State. Communities are prohibited from entering the forest to gather food. The resulting despair and hunger, drives people to migrate. Carbon offsets are a driver of immigration. Furthermore, carbon offset regimes like the TFS are a sham that do not reduce greenhouse gas emissions at source.”

According to Tom BK Goldtooth, Executive Director of Indigenous Environmental Network, “the Tropical Forest Standard constitutes a crucial piece of the California’s proposed international carbon offsets scheme, which is already fueling massive land grabs of Indigenous Peoples territories and human rights violations. The Tropical Forest Standard is a cynical attempt to outsource California’s responsibility for such abuses to governments of the Global South and lets big polluters like Chevron oil refinery to buy cheap permits to pollute. The so-called Tropical Forest Standard (TFS) really stands for Trading the Future of the Sky. It privatizes the Sky and the air that we breathe.”

As historical epic wildfires in California created devastation and death, Sky Protectors wearing respiratory masks were forced to move their pre-hearing prayer circle and press conference inside. Sky Protectors were quick to point out the irony of holding the California Air Resources Board hearing on a day when the sun was hidden by thick smoke and it was impossible to breathe clean air.

Removing his mask, Sky Protector Marlon Santi Gualinga of the Kichwa People of Sarayaku in the Ecuadorian Amazon and a national leader of the Pachakutik movement explained, “We are defenders of the forest and the sky. We will not allow the sky to become a business venture. If California want to save the planet, California has to stop being hypocrites. California has to reduce carbon emissions at source and keep oil in the ground!”

According to Ana Luz Valadez Ortega, the delegation’s expert on carbon offsets in Chiapas, Mexico and a researcher with the Centro for Change in Rural Mexico (CECCAM), “we completely reject REDD+ (another name for forest offsets) because it flagrantly violates indigenous Peoples’ rights to self-determination, self-government and livelihood, which includes native knowledge systems required to care for forests. REDD+ greenwashes extractive industries’ destruction like oil drilling, fracking and monoculture plantations and allows pollution and deforestation to continue. REDD+ also violates the sovereignty of all of the people of Mexico who have not been informed, consulted nor granted their consent.”

Chief Ninawa Huni Kui, President of the Huni Kui People’s Federation of the Brazilian Amazon, State of Acre, Brazil, denounced that “California’s forest offsets are part of “green” capitalism, which privatizes life and violates human rights. Offsets are a huge lie from start to finish. If Californian politicians want to paint themselves as saviors of the climate, they must not promote false solutions to climate change like the Tropical Forest Standard that threatens Indigenous Peoples’ survival. We defend the Sacred. We defend Mother Earth. The Sky is not for sale!”

For more information, check out: