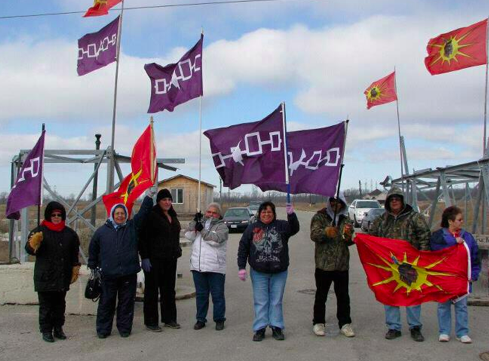 Photo from recent march to build solidarity between six nations and non-native supporters
Support our journalism. Become a Patron!

The Six Nations Confederacy is calling on supporters to help enforce a cease and desist order against Samsung. The multinational company is currently attempting to move forward with a massive wind energy project on Six nations Land. Writing for the Toronto Media Coo-op, Tim Groves reports.

Members of Six Nations have called upon supporters to join them on May 29th in blocking a multi-billion dollar renewable energy windmill project being planned by Samsung. The multi-national Corporation did not receive permission from the traditional Haudenosaunee government in Six Nations to proceed with the project.

Development of the project had been stopped since Haudenosaunee Confederacy Chiefs Council, the traditional leadership body of the Six Nations people, issued a cease and desist order in November 2011. However last week Samsung announced they would proceed with the project. Before they can begin construction they must conduct an archaeological survey. Work on this survey recommenced today, with a team of about 60 people working on the survey.

The Ontario Provincial Police are currently on the site.

“The Haudenosaunee Confederacy Chiefs Council is calling for all Haudenosaunee people and their allies to come together and to make Samsung and the archaeologists working for them respect the ‘cease and desist’ order” reads an email message put out by solidarity activists.

“You have this big movement fighting against the 1%, Samsung is that 1%” said Wes Elliot a member of Six Nations, who was speaking to 30 people who gathered at an event on building relationships between Six Nations and non-native people in Southern Ontario.

He urged supporters to join them at the site the next day.

“You have all these people talking on the Internet. If you actually want to do something then come down and help.”

The Haudenosaunee Development Institute (HDI), an arm of the Haudenosaunee Confederacy Chiefs Council, had informed Samsung that they would be required to fill in a paper work on the impacts of their project and pay a $7,000 application fee.

However both Samsung and the Ontario government asked HDI to change the name from an application fee, as that name would acknowledge the jurisdiction of the confederacy over the land. HDI refused to change the name.

Samsung had one sit down meeting with HDI, but has since then opted to dealing only with the Six Nation band council.

Elliot explained to the Toronto Media Coop why the Band Council is not the representative of Six Nations.

“The elected council in our territory is supported by about 4% of people evidenced by the amount of people who vote in elections. The Band Council is a creature of the Indian Act, created in our territory in 1924, our confederacy is over 1500 – 2000 years old”.

The proposed development would take place in the area included in a 1701 treaty between the Six Nations Confederacy and the Crown.