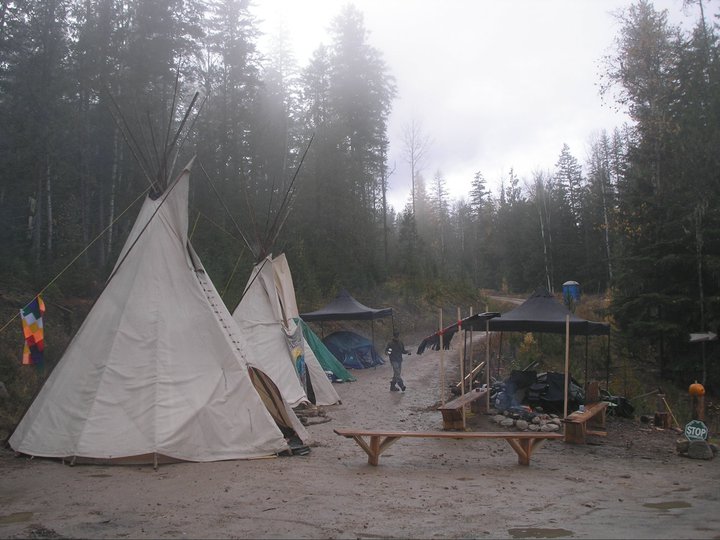 Sinixt Nation Establishes a Protection Camp on Their Ancestral Land

The Sinixt Nation, declared extinct by the Canadian government more than 50 years ago, has set up a protection camp on their ancestral land, halting all commercial logging in the area known to the Sinixt Nation as “Slhu7kin”. Below, a news release about the ongoing camp, courtesy of the Vancouver Media Coop

On October 26th 2010, the Sinixt Nation asserted their sovereignty by initiating the Sinixt Slhu7kin (Perry Ridge) Protection Camp on their ancestral lands. The Sinixt, by declaration, have established the “Sinixt Slhu7kin – Perry Ridge Wilderness Preserve to protect the rich bio-diversity on Perry Ridge and the collective domestic watershed interests of the Perry Ridge community.”

Sinixt Nation members, local residents, and supporters are gathered at the beginning of the Perry Ridge Forest Service road near the town of Slocan, BC. The camp has halted all commercial logging in the area.

After a complete refusal to consult with the Sinixt Nation, BC Timber Sales via BC Ministry of Forests and Range sold the logging rights to 4 controversial cut-blocks on Perry Ridge to Sunshine Logging LTD of Kaslo, BC. Sunshine Logging purchased the 2 year contract for approximately $330,000 after BC Timber Sales dropped the auction bidding price because no companies wanted to touch the highly contentious contract with a ten foot pole.

This isn’t the first time people have taken a stand to protect the area known as Slhu7kin to the Sinixt. In 1997 local residents, the Perry Ridge Water Users Association, and Sinixt members took both legal and direct action and successfully halted road building on the ridge. Over 300 people blocked the road demanding protection for the area.

Known as the Arrow Lakes Indian Band under the Indian Act, Canada officially declared the Sinixt extinct in 1956. This left Sinixt members living on the Colville Reservation (in the USA) or scattered among other nations in BC without recognition.

Many Sinixt returned to the Northern part of their territory to protect their ancestral burial sites in Vallican, BC in the late 1980’s when a BC Ministry of Transportation road development project desecrated their burial sites, removed bones and artifacts and placed them in museums. After a tremendous amount of effort from the Sinixt and supporters, remains of their ancestors were returned to them and were reburied at the site. The Sinixt to this day continue to live peacefully and re-occupy their land in Vallican making it the longest re-occupation in Canadian history.

Sinixt territory spans from the headwaters of the Columbia River north of Nakusp, to Kaslo in the West, Revelstoke in the East, and down into what is now known as Washington State. Over 80% of the territory lies on the “Canadian side” of the 49th parallel.

In BC alone, 15 dams were built on Sinixt Territory. In 1954, Kaiser Aluminum proposed a dam on Arrow Lake. The Keenleyside Dam flooded 140 Sinixt cultural sites. The Cominco smelter at Trail built a dam on the Kootenay River near the ancient Sinixt village of kp’itl’els. The zinc and lead smelter has since dumped over 13 million tonnes of toxic slag, including mercury, into the Columbia River.

“A visitor to the Columbia Basin will be unlikely to see any indication that there was ever a native culture that thrived for so long in this region. Most of the Sinixt traditional villages and burial grounds were flooded with the damming of the Arrow Lakes. We know of only one monument to the Sinixt. In the town of Edgewood, there is a totem pole that was erected in the late 1960’s. It was commissioned by B.C. Hydro as a commemorative to an extinct race.”

But the fact of the matter is that the Sinixt never had totem poles and they aren’t extinct.

The Sinixt Nation and their supporters are encouraging people to help out any way they can.

More photos and updates can be found on the Sinixt Nation’s Facebook page: http://www.facebook.com/pages/Sinixt-Nation/255421804460

Note sure how to say “Sinixt”? Want to know why the government says they don’t exist? Listen to the one-hour radio documentary: Keeping the Lakes Way: The Past and Future of the Sinixt