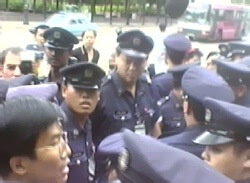 Citizens in rich Nations often take freedom of expression for granted, even though it’s often heralded by those same people to be a privilege which they hold in great esteem. Just don’t speak too freely, the saying goes.

Singapore, the often-cited economic miracle of the far East, holds this by law. Quite simply you are not allowed to speak against the government, or say or write or create films which could be viewed as upsetting to the deeply conservative Singapore majority. If you do any of these things, you will be silenced, investigated, financially ruined, imprisoned, and even compelled to banish yourself (otherwise “things will happen.”) But even so, there’s a growing call for democracy…

Singapore rebel is a film that chronicles the work of one man making such a call. Dr. Chee Soon Juan, the Secretary-General of the Singapore Democratic Party, has been twice imprisoned for championing democratic change in Singapore. As revealed in the film, In 2001 he was ordered to pay 500,000 Singapore dollars to Lee Kuan Yew, and former leader Goh Chok Tong for defaming them during the elections.

The film itself has also been subject to a fair amount of controversy. In fact it was banned in Singapore.

In April 2005, the film was entered into Singapore’s International Film Festival, but the director, Martyn See, was warned that he may face up to 2 years in prison if the screening went forward. Festival organizers were also told to pull the film because it was a so-called party political film. It is illlegal to create such films.

Martyn felt it best to pull it from the festival — and then went on to be subject of a 15-month police investigation for making Singapore rebel.

Martyn has since followed the documentary film with two more: Zahari’s 17 Years, which is about journalist, poet and author Said Zahari who was imprisoned for seventeen years in detention without trial; and Speaker’s Cornered, which documents a confrontation between Pro-Democracy Activists and Police at a government-designated free-speech zone in 2006 — when Singapore hosted the World Bank’s and IMF’s Annual Meeting.