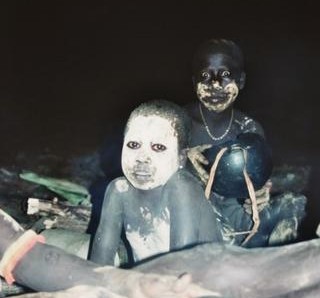 The end goal of the residential school system in Canada, it has been said, was to "kill the Indian in the Man." For India MP Pada Ray it's to "save the Indian from the Jarawa." Photo by Christian Caron, http://is.gd/cT4iM
Support our journalism. Become a Patron!

An Indian Member of Parliament (MP) has called for the forced removal of all children from the Indigenous Jarawa People on Andaman Island, off the coast of India, so that they can be indoctrinated into living and behaving like Indian citizens.

“Indigenous people around the world have reacted furiously to the move, which echoes the much-criticised policy of the ‘Stolen Generation’ in Australia, and similar policies in North America,” says Survival International.

Much more than criticized, the policies were blatant acts of genocide, according to the terms of the 1948 United Nations Convention on the Prevention and Punishment of the Crime of Genocide.

Article 2 of the convention defines genocide as “Any of the following acts committed with intent to destroy, in whole or in part, a national, ethnical, racial or religious group, as such: killing members of the group; causing serious bodily or mental harm to members of the group; deliberately inflicting on the group conditions of life, calculated to bring about its physical destruction in whole or in part; imposing measures intended to prevent births within the group; [and] forcibly transferring children of the group to another group.”

MP Bishnu Pada Ray’s proposal shows an open intent to indoctrinate the children so that all Jawara can be convinced to abandon their so-called ‘archaic’ ways and live as members of Indian society.

If the government doesn’t take action, says Pada Ray, then the Jawara will become extinct.

It’s a highly disturbing twist of the facts, since the Jawara are indeed facing extinction; but only because of their increasing exposure to mainstream society and industry.

Even more disturbing, the proposal reads like a plan to spread some kind of fatal disease. In effect, it says the government has to infect the children and then send them back into the community so it infect others. Then, they have to take the children a second time to apply “the treatment” once more.

The proposal, which will be submitted to the Island Development Authority of India (IDA) for their consideration at an upcoming meeting in July, provides an example:

“[An] Example can be taken from the treatment given to Birhore and Sabar tribals of Jharkhand in Singhbhum and Khunti districts. In a nutshell, children in the age of 6 to 12 years were weaned away from the tribe and kept in a normal school atmosphere, where they were very quickly trained in personal hygiene, use of clothes and basic reading and writing skills. They were also exposed to eating habits of simple mainstream people and modern amenities such as television and motor vehicles. After 6 months they were returned to the tribes and re-contacted after a month.”

“When they were found to have lost some of their clothes and mainstream habits; it was also observed that members of the tribe had acquired some of the mainstream characteristics such as personal hygiene and use of clothes. The exercise of schooling the same children were repeated, this time over a longer period. Over time, trainers were able to infiltrate into the main pockets of tribes and inculcate skills of personal hygiene, wearing of clothes and their maintenance, partaking of cooked food and basic agricultural and horticultural activities. The final result was training the entire population into a village identical with any other village of ST population in Jharkhand.”

Responding to the plan, Michael Cachagee, Executive Director of the National Residential School Survivors’ Society (NRSSS) in Canada, said, “The NRSSS cannot comprehend or fathom that any nation in today’s world would consider interning any of their citizens, especially children, in a ‘residential school’, given the horrific history associated with these types of schools in Canada and other parts of the world.”

According to MP Pada Ray, it’s to “save” the Indian from the Jarawa.

Please write to following government officials, urging them to ensure the protection of the Jarawa Peoples. They, like all other Tribal Peoples in the Andaman Islands and most of India, have special protections under India’s Constitution. Pada Ray’s proposal clearly violates that protection. Write to: