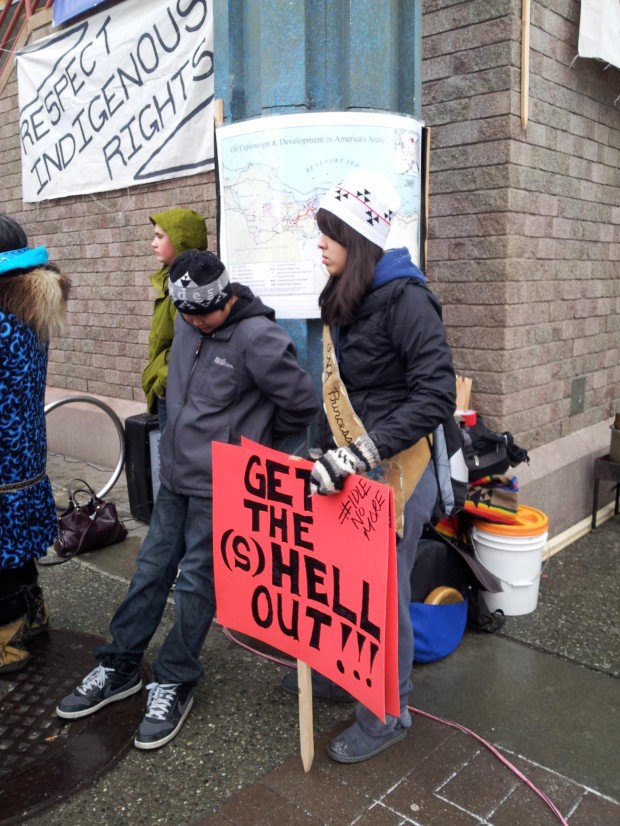 On Jan 30 Shell announced it was canceling its 2014 drilling in the Alaskan Arctic. Writing for Platform London, Faith Gemmill, Executive Director of Resisting Environmental Destruction on Indigenous Lands (REDOIL), discusses the court decision that forced Shell’s hand, and the Indigenous rights context behind it.

Last week the Court of Appeals for the Ninth Circuit ruled that the US government violated the law when it sold offshore oil and gas leases in the Chukchi Sea off the coast of Alaska.  The decision stems from a lawsuit filed by a coalition of Alaska Native and conservation groups.  Indigenous Plaintiffs included The Native Village of Point Hope, Inupiat Community of the Arctic Slope and Resisting Environmental Destruction on Indigenous Lands (REDOIL), among numerous conservation groups.  EarthJustice, a nonprofit environmental law organization, represented our groups.

REDOIL joined this lawsuit because we strongly uphold and promote the subsistence rights of Alaska Natives and offshore development poses a very real threat to those rights in relation to the Chukchi Sea and Inupiat subsistence and that is unacceptable.

This decision is one that we celebrate.  Although we’ve had legal victories in court skirmishes on this issue, we’ve been dealt political blows that favored Shell and ignored the rights of the Inupiat and their food security.  This is another opportunity for those in decision making positions to realize that offshore drilling in this region is too risky, not only to Inupiat subsistence but to this critical ecosystem.

Indigenous Peoples have always viewed human rights and a healthy environment as fundamentally linked. The careful management and protection of the Arctic environment is a requirement for the enjoyment of Alaska Native human rights, particularly as they relate to the “subsistence” or “traditional” economy.  Indigenous Peoples of Alaska have long fought for recognition of subsistence rights as a basic inherent fundamental human right.  The Inupiat of the North Slope of Alaska continue to live the ancestral subsistence way of life, which is dependent on a healthy ocean ecosystem.

In no case may a people be deprived of its own means of subsistence.

In this recent win, the Court ruled that the Department of Interior failed to adequately analyze the potentially dramatic environmental effects of the sale before offering the leases.  It determined that the agency had analyzed

[this analysis] skews the data toward fewer environmental impacts, and thus impedes a full and fair discussion of the potential effects of the project.

The agency will have to revise or supplement its analysis for the lease sale once again and must reconsider its lease sale decision.

We believe that the lease sale should be cancelled.  That would be the best decision that the US Government can make on this issue, for several important reasons.  First is the relationship that the Inupiat have with the Chukchi Sea and the resources it provides the communities for their food security.

Mae Hank, Inupiat grandmother from the community of Point Hope was happy with the decision:

With this court ruling; it has given me a sense of contentment for now that we have prevented another intent to drill in nature’s abundance of our food resources. With whaling season coming in a few months we will worry not, my heart sings with joy for this ruling we know there is justice!

The Chukchi Sea is home to several important Arctic species such as polar bears, walrus, beluga whales, bowhead whales, and seals. Therefore the Chukchi Sea of the Arctic Ocean is critical to Inupiat subsistence lifestyle. These vital subsistence resources that are intrinsic to the livelihood of Inupiat within the Arctic Oceans are at risk from pollution, noise disturbance, and spills.  A major oil spill in the Arctic Ocean would be impossible to clean up and could have devastating consequences for the region’s ecosystem and communities.

Another factor to take into consideration is that Shell has proven that it has no capacity to drill in this region.  In 2012 the company suffered severe setbacks and mishaps—including running one of its rigs aground, almost running its other rig aground, and incurring pollution and safety violations exceeding a million dollars, with investigations still ongoing.  This should be taken into consideration, since the company itself suspended its program for 2013, acknowledging that it was not equipped to drill in this harsh Arctic region.

A final factor would be that the Arctic is warming at twice the rate of the rest of the world. Indigenous communities in Alaska are already facing severe climate impacts. Why compound this with further oil extraction disrupting their food system?   Barack Obama should take action to show he is still committed to act on climate change for the sake of future generations.  The decision whether to affirm leases in the Chukchi Sea presents an important opportunity for the Obama Administration to take real and meaningful action to address climate change. He should cancel the leases and leave the oil in the ground under the sea, where it won’t spill or further warm the planet.  Humanity would benefit from a decision to cancel the leases, but also the Indigenous peoples of the North’s food security would be assured, and an inevitable oil spill accident would be avoided in this critical ecosystem that is home to many threatened Arctic species.

Faith Gemmill is the Executive Director of Resisting Environmental Destruction of Indigenous Lands (REDOIL)  REDOIL is a movement of Alaska Natives of the Inupiat, Yupik, Aleut, Tlingit, Eyak, Gwich’in and Denaiana Athabascan Tribes who came together in June 2002 in Cordova, Alaska to form a powerful entity to challenge the fossil fuel and mining industries and demand our rights to a safe and healthy environment conducive to subsistence.  REDOIL aims to address the human and ecological health impacts brought on by unsustainable development practices of the fossil fuel and mineral industries, and the ensuing effect of catastrophic climate change.  We strongly support the self-determination right of tribes in Alaska, as well as a just transition from fossil fuel and mineral development to sustainable economies and sustainable development.

The three core focus areas of REDOIL are: