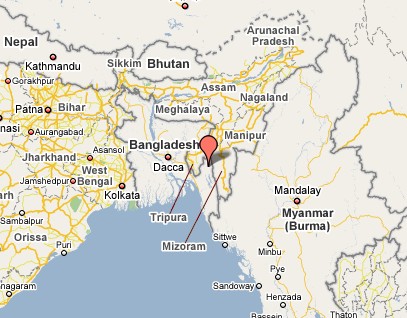 On April 20th, hundreds of illegal settlers attacked seven Jumma communities in the Chittagong Hill Tracts (CHTs) of Bangladesh. Over 500 houses are reported to have been burned, and an unknown number of Jumma were assaulted, raped, and looted during the attack.

According to a recent report by the Asia Centre for Human Rights (ACHR), the attack comes shortly after a group of Jumma gathered to discuss how to defend themselves against an attack, which they had been hearing rumors about. Somehow, the army learned about the gathering and approached the Jumma to tell them there’s nothing to worry about.

As they were talking, a group of Bengali settlers began the attack.

This deliberate act of arson, looting, assault and rape, leading to the destruction of seven Jumma villages is reminiscent of similar attacks which forced over 70,000 indigenous Jumma peoples to cross the international border and seek refuge in India in 1985-1986. German anthropologist Wolfgang Mey’s report, “Genocide in the Chitttagong Hill Tracts” (IWGIA Document 51 of 1984) highlighted gross and flagrant human rights violations on the indigenous Jumma peoples. These violations were further proven by Chittagong Hill Tracts Commission in its report, “Life Is Not Ours” in 1991. The CHTs Commission headed by Prof Douglas Sanders had visited the indigenous Jumma refugee camps and the Chittagong Hill Tracts with the permission of the government of India and government of Bangladesh.

The latest burning down of over 500 houses in the CHTs was barely covered in Bangladeshi press. It is unlikely to receive international attention either. Given the State of emergency, there cannot be any protests by indigenous Jumma peoples in the CHTs; the protest in mainland Bangladesh so far remain muted and confined to university campuses. It remains to be seen how the Bangladeshi civil liberties and human rights groups address the situation.

Whether the State of Emergency is proclaimed or not, it makes little difference to indigenous Jumma peoples. In the CHTs, the army rules the roost and the civilian authority remains subservient to the Army. Yet, there is no denying that lifting of emergency will provide much needed political space in mainland Bangladesh.

They go on to ask civil society organizations to visit the affected areas and “assess the extent of the damages caused and address immediate needs of those displaced. Unless international community undertakes such visits, attacks on indigenous Jumma people will only intensify.”

Stephen Corry, Survival International’s director adds, “Bangladesh continues to want the land, but not the people, of the Chittagong Hills. Destroying these villages is a criminal human rights violation, a massive human tragedy, and comes close to a declaration of war. Only international pressure can end this. Quiet diplomacy has never worked there.”