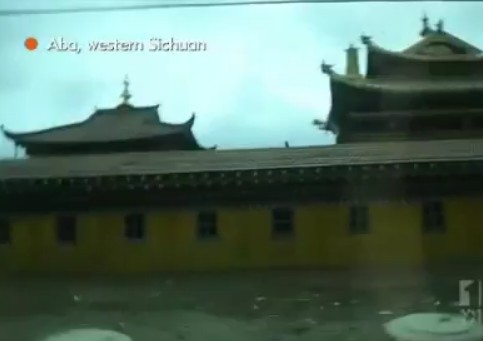 Tenzin Choedron, an 18-year-old Tibetan nun, is the latest Tibetan to die in protest against the Chinese government. On February 11, Tenzin Choedron set herself on fire, just a few kilometers outside of the remote town of Ngaba (Chinese: Aba) in occupied Tibet. She is the 21st confirmed Tibetan to self-immolate since February 2009.

The areas in Occupied Tibet where the immolations are taking place are essentially no-go zones to foreign reporters, but a British newspaper journalist, Jonathan Watts, recently managed to enter the town of Ngaba (Chinese: Aba) and document what is happening there. ABC Lateline recently interviewed Mr. Watts.

EMMA ALBERICI, PRESENTER: Tension in China’s Tibetan regions is worsening with a wave of self-immolations that’s showing no sign of stopping. An 18-year-old nun died today Tibet after setting herself alight over the weekend. According to exile groups, over the last year at least 19 people, mostly monks and nuns, have killed themselves in protest against Beijing’s rule. The areas where the immolations have taken place are effectively no-go zones to foreign reporters, but a British newspaper journalist has reached one of the most sensitive towns Aba in Sichuan Province. And a warning that this story contains disturbing images.

STEPHEN MCDONNELL, REPORTER: China’s Tibetan monasteries have become hotbeds of rebellion, espionage, restriction and suicide. Beijing had hoped that ethnic Tibetans would’ve calmed down by now, following the violent rebellion in 2008. But that’s not been the case.

In several Chinese provinces, monks are gathering again, sometimes in huge numbers. Here their banners call for a release of what they say are political prisoners and the return of the Dalai Lama.

Elsewhere they’re holding sit-ins to protest against Chinese rule, claiming their culture is under threat and that human rights abuses are widespread. There’s only amateur footage of these gatherings. That’s because foreign reporters are being blocked from entering an area of roughly a quarter of China’s land mass.

But one journalist has made it into the town of Aba in Western Sichuan Province.

JONATHAN WATTS, THE GUARDIAN: There are police maybe every 30 or 40 metres, and in some cases 30 or 40 police sitting together in riot police uniform with shields, with batons. It’s something I’ve never seen anywhere else before. Some of those batons had spikes coming out of them. It looked totally medieval.

STEPHEN MCDONNELL: This place is the home of the Kirti Monastery, where at least five monks have set themselves on fire in protest at Chinese rule. The self-immolations have led to an extensive lockdown.

JONATHAN WATTS: I’m in a strange position because there are security personnel everywhere. If I just raise my head, I’ll be spotted. And as the only foreigner for hundreds of miles around, I expect I would soon be picked up and taken away.

STEPHEN MCDONNELL: Guardian reporter Jonathan Watts drove around Aba filming through the car window. He saw huge metal roadblocks and what appear to be small armies of military police.

JONATHAN WATTS: It reminded me of trips to Northern Ireland at the height of the Troubles. It looked like a situation that’s gonna last for a long time, just like the Troubles in Northern Ireland. This isn’t going to go away. It looked to me like they were there for – they’re there for the duration, they’re anticipating having to lock down certain key centres and none are more important to them than Aba for a very long period to come.

STEPHEN MCDONNELL: The Chinese government blames exile groups for stirring up the trouble in western Sichuan that’s recently led to clashes in which Tibetans have been shot dead.

LIU WEIMIN, CHINESE FOREIGN MINISTRY SPOKESMAN (voiceover translation): Clearly the situation has been effectively dealt with. … We believe that the recent series of events have clearly been masterminded and stirred up by someone behind the scenes.

STEPHEN MCDONNELL: Yet it does take a fair bit of unhappiness to do this. Tibetans, mostly monks, have been self-immolating. Overseas this was also tried outside the Chinese embassy in New Delhi. Yet in China itself, it might as well not be happening.

There’s a remarkable level of ignorance here about recent events in ethnic Tibetan areas. What little media coverage there has been is essentially pro-government propaganda, so most Chinese people have absolutely no idea that Tibetans have been killing themselves in this most horrible way.

And for the last half a year, these self-immolations have been occurring at a rate of on average three times a month. So when Jonathan Watts snuck into Aba, he wasn’t surprised to see a fire truck parked in the street.

JONATHAN WATTS: Essentially you’ve got a town on edge and a town that’s divided between the Tibetans and the paramilitaries, between, I guess – one way of looking at it – between the potential immolators and those standing by to extinguish any fire that breaks out. And it’s kind of a symbol for what’s going on in all of Tibet that there is this spark that could create a fire at any moment. And the authorities are there just to kind of keep it permanently doused down. So, I left the place thinking, “Yes, this area has been pacified, but it’s – you could never say it’s at peace.”

STEPHEN MCDONNELL: By locking town this massive area and locking out the media, the Chinese Government seems confident it can both keep a lid on this rebellion and minimise world attention. But amongst Tibetans, the mood for more dissent does seem to be growing.