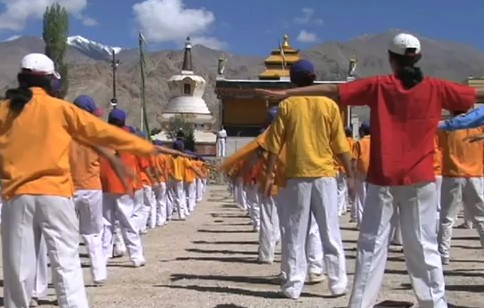 Schooling the World: The White Man’s Last Burden takes a vital look at the often-harmful effects of Western education on indigenous cultures.

“For centuries, missionaries have penetrated every corner of the globe with Bibles in their hands. Today’s missionaries carry algebra, chemistry, English, and computers. But what really happens when we replace a traditional culture’s system of knowledge with our own? Does life really get better for its people?”

Schooling the World, a new 60-minute documentary by Lost People Films, turns to one of the highest and driest inhabited places on earth, Ladakh, for an answer to these two straightforward questions that educators, colonial-society enthusiasts and well-intentioned non-profit groups tend to quickly dismiss.

Situated on the western edge of the Tibetan plateau in the Himalayan Mountains, for centuries Ladakh was home to a rich and self-sustaining culture. “Life was very simple, but people always had enough, and more than anything they were happy”, says Tashi Rabgyas, Ladakh’s leading poet, scholar and philosopher.

Then, in the early 1970s, came ‘development’. The first roads into the area brought heavily subsidized goods as well as idealized images of western consumer culture – undermining the local economy and eroding cultural self-esteem. The result has been increasing community and family breakdown, unemployment, sprawling urban slums and pollution.

With the advent of modern schooling, traditional local knowledge of sustainable agriculture, building, textile production, and water management is in sharp decline, along with knowledge of the intellectual and spiritual tradition of Tibetan Buddhism and even the Ladakhi language. As one Ladakhi university student says, “Most students don’t know much about their own traditions; sometimes they can’t even speak their own language.”

To learn more about the film, buy a DVD or schedule a screening of Schooling the World in your community, visit schoolingtheworld.org