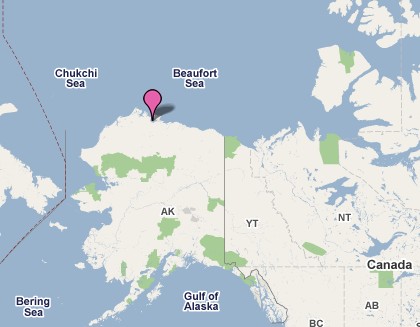 Teshekpuk Lake, located in Northern Alaska, is one of the most important and sensitive arctic wetland complexes in the Northern Hemisphere. A summer home to thousands of migratory birds, the lake region is also an important subsistence hunting and fishing ground for the local indigenous population.

In 1923, Teshekpuk Lake was placed into Alaska’s National Petroleum Reserve and was designated for use by the military, but the government of the day came to see the area was just too unique to exploit. The Bush Administration, however, sees no such value. In fact, for some time they’ve been committed to sacrificing Teshekpuk Lake and numerous other regions to get that liquefied dead matter called oil.

In September of last year, the Bush administration actually tried to sell the area as part of an oil and gas lease sale, but the federal courts ruled the plan illegal. Prior to the ruling, a campaign was pushed forward in which over 300,000 Americans petitioned the administration to protect the Teshekpuk Lake wetlands.

Despite this, it appears the government is still going ahead with its plan, threatening not only Teshekpuk Lake, but numerous other regions throughout the entire 72 million acre Arctic Ocean.

During the summer, the DOI “opened over 33 million acres in the Beaufort Sea, over 39 million acres in the Chukchi Sea, and 5.4 million acres in the Bering Sea as part of its new 2007-2012 five year oil and gas leasing program. At the same time, the DOI allowed Shell Oil to move forward with exploration plans in lease areas from the previous 5 year program, starting with exploration activities on lease tracts located offshore of the Arctic National Wildlife Refuge. Conservationists, the North Slope Borough, the Alaska Eskimo Whaling Commission, and the Inupiat Community of the Arctic Slope are challenging the DOI’s approval of this exploration plan in the 9th Circuit Court of Appeals. In August, the 9th Circuit granted an injunction of Shell’s exploration activities and established an expedited briefing schedule for its consideration of the merits of the case.”

Regarding Teshekpuk Lake, there is currently a comment period open to the public, but it closes on November 6. The Wilderness society has a letter you can send online to call for the continued protection of the region.

A few days ago, several Indigenous People from Point Hope and the community of Nuiqsut gathered to voice their concerrns and opposition to all this oil and gas development throughout the Arctic region. Here is what some of them had to say:

“This briefing is to provide Alaska Native people with the opportunity to voice their concerns about the threats that oil and gas development pose to the future of their cultural traditions,” said Cindy Shogan, moderator and Executive Director of Alaska Wilderness League. “Again, this presents Congress with a real opportunity to preserve what remains of the Alaskan Native cultures in northern Alaska. It is our hope that Congress will protect these cultures rather than let them remain at the mercy of this ‘drill-it-all’ administration.”

“We are concerned in Point Hope that as offshore seismic surveys continue, the animals we hunt and follow through the seasons are frightened and slowly disappearing from our shores, hurting my people’s ability to survive and continue our subsistence traditions and our way of life,” said Earl Kingik, subsistence user and representative for the Tribal Council of the Native Village of Point Hope. “We have passed a resolution that opposes all oil and gas activities on and offshore.”

“Human health effects from oil and gas development continue to rise with higher numbers of asthma-related illnesses in my village of Nuiqsut, where the Alpine oil fields are just 4 miles away,” said Rosemary Ahtuangaruak, former Mayor of the City of Nuiqsut, community healthcare practitioner and board member of the Inupiat Community of Arctic Slope (ICAS). “We are worried about these continuing health issues and the lack of help to address the long-term impacts they pose to our people. As we said last year, we say again, we oppose opening the Teshekpuk Lake area to oil and gas development. ICAS passed a resolution two weeks ago which states we oppose development in Teshekpuk Lake.”

“As a member of the next generation of subsistence whalers and hunters, I’m seeing the effects of climate change in all I do,” said Elijah Lane, a member of the Native Village of Point Hope and Director of its Parks and Wildlife Department. “I have seen the erosion and the disappearing ice in the Chukchi Sea. I have seen the changes in the migrations of animals on the land and in the water as a result of climate change in Alaska.”

“Minerals Management Service has demonstrated to the public that they are an agency with a steamrolling agenda, egged on by an overly-aggressive industry,” stated Rachel James from Pacific Environment’s Alaska Office. “In the process of pushing the expansion of oil and gas industry at ground zero for global warming, they are threatening polar bears, whales, indigenous peoples, and ignoring the realities of climate change. They need to move beyond oil.”

“As a subsistence hunter of the Native Village Point Hope, I continue to hear my community’s concerns about oil and gas development,” said Daisy Sage, council member of the City of Point Hope. “I want my children and grandchildren to have the same traditions now and for thousands of years more but oil and gas development threatens to take that away. I worry for this and all of the future generations.”