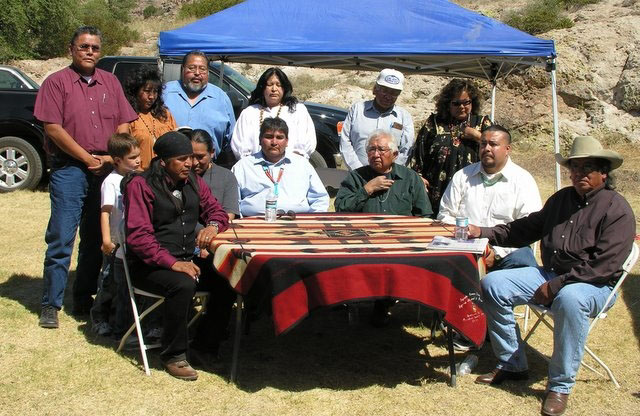 Six Tribal leaders of the Apache Nation gather at Oak Flat to sign an agreement to protect the land c/o mining-law-reform.info/Index.htm
Support our journalism. Become a Patron!

In the statement below, Vernelda Grant, a representative from the San Carlos Apache Nation, speaks out against Resolution Copper’s proposed underground mining project in southeastern Arizona.

The statement, which calls for “the immediate removal of Resolution Copper Company from further desecrating the holy and sacred Oak Flat and Apache Leap”, was read during the recent United Nations Permanent Forum on Indigenous Issues in New York.

The San Carlos Apache Tribe is one of several Indigenous Nations based in the State of Arizona who are staunchly opposed to Resolution Copper’s mining project. Others include the White Mountain Apache, Hopi, Hualapai, Yavapai Apache, Camp Verde, and Tonto Apache Tribes.

All six Tribal Nations are deeply concerned about company’s will-full endangerment of two sacred sites, known as Oak Flat and Apache Leap; as well as their utter lack of transparency and their ongoing effort to “bypass and violate environmental, indigenous, and human rights laws” in order to move the project ahead.

Another concern, noted in a 2006 joint resolution (PDF), is that the company will “wrongfully deplete or contaminate the water resources found in nearby watersheds and aquifers, leaving the neighboring Native Nations and nearby communities in Southeastern Arizona to deal with the permanent religious, cultural and environmental damages of this massive mining project – damages that will continue long after the parent companies of Resolution Copper, foreign mining interests Rio Tinto PC and BHP-Billiton, Ltd., have reaped the profits from the copper ore and water removed from these lands.”

For more information and to learn what you can do to help, visit the Arizona Mining Reform Coalition website: http://www.azminingreform.com/

To learn more about endangered sacred sites in the US, see America’s renewed legacy of destroying Indigenous cultures

Mr. Chairman and members of the Permanent Forum, my name is Vernelda Grant, I am here representing the sovereign nation of the San Carlos Apache Tribe, located in southeastern Arizona.

The purpose of this statement is to re-affirm why the San Carlos Apache Tribe, the Inter-Tribal Council of Arizona, which represents American Indian tribes, Nations, and Communities of Arizona , are rigorously opposed to the Southeastern Arizona Land Exchange as well as the newly introduced Copper Basin Jobs Act , mining in holy places, and large-scale environmental destruction caused by foreign conglomerates. These activities, ultimately, harm Apaches and Indigenous peoples who, since time immemorial, have lived and continue to use these holy and sacred spaces essential to the continuation of Apache and Indigenous cultural identity and life ways.

Oak Flat and Apache Leap, as holy and sacred places to the Apache and many Indigenous Peoples, has also been an area recognized as unique by the United States as evidenced by President Dwight D. Eisenhower who took action to place the lands into trust and under special protection by the United States. The land exchange would overturn the 1955 Oak Flat Public Land Withdrawal Order by President Eisenhower for 760 acres of Tonto National Forest Land that was made to preserve Oak Flat for the use of the public and to prevent mining from destroying the area in a period when mining towns were booming.

Resolution Copper Mining Company, a foreign multi-national mining company, is seeking a land exchange widely known as Senate Bill 409 titled, the “Southeastern Arizona Land Exchange and Conservation Act of 2009”. The Act would allow the Resolution Copper Mining Company to bypass and violate environmental, indigenous, and human rights laws in order to extract the metals which cause unknown devastation of known holy sites central to the Apache people and to many neighboring Indigenous populations that use and continue to use this pristine area since time immemorial.

An additional bill, introduced in March 2010 in the House of Representatives known as H.R. 4880, and is named the “Copper Basin Jobs Act”, is deliberately misleading, as it’s real purpose is to provide for Resolution Copper Company’s large scale block cave mining operation and is nothing more than an attempt to transfer American resources form the hands of the American public to foreign interests.

The San Carlos Apache Tribe, along with the Inter-Tribal Council of Arizona, is demanding full and complete protection of the holy lands by the federal government under known existing federal legislation. Full consideration under the Free Prior an Informed Consent (FPIC) in which Resolution Copper Company has yet to duly fulfill, has been and will be neglected under these Acts. Resolution Copper Company’s parent companies, Rio Tinto based in England and BHP Billiton based in Australia* adheres to international law due to its foreign company status. The San Carlos Apache Tribe and the Inter-tribal Council of Arizona demand the immediate removal of Resolution Copper Company from further desecrating the holy and sacred Oak Flat and Apache Leap, harming not only this physical and spiritual place, but the cultural identity and practices of the Apaches and numerous Indigenous peoples.

We believe that this statement be made strong because the beliefs we have in our Creator and our prayers are strong. We believe that everything in the natural world is alive and has a power. We have a name for everything: the plants, the animals, the birds, the atmosphere, the minerals, the winds, the stars, the bodies of waters, the places and everything else surrounding us. We recognize the power that each element of the natural world has, and that each individual power is directly related to particular Holy Beings.

Apaches and Indigenous peoples need access to these particular areas and ecosystems, in person or remotely, by physical access, prayer, song, vision, or ceremony. Our traditional specialists use song cycles and ceremonies, just like modern scientists use formulas and technology for the community’s healing, protection, and physical and spiritual well-being and happiness.

The United States Government has existing laws and departments that administer these laws on behalf of the government. We urge that members of the United Nations Permanent Forum on Indigenous Issues support our claim to protect holy and sacred sites and places that are important to the religious practices and access to these areas, such as Oak Flat and Apache Leap that support our daily life ways.