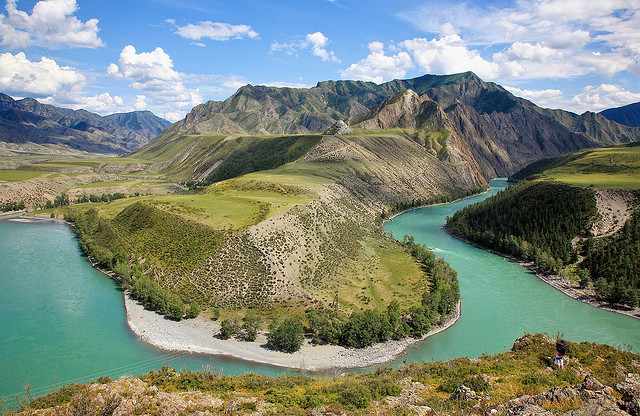 The Golden Mountains of Altai (Photo by mmmAleksei on flickr. Some rights reserved)
Support our journalism. Become a Patron!

There was a jubilant response when IC reported, in July this year, that a new decree had been passed to facilitate the listing and protection of sacred sites on the Ukok plateau. Yet, even in disseminating this good news, the article imparted a warning against premature jubilation. Caution was advised on the basis that the Russian government may well ignore this new commitment and given disturbing recent developments in the Altai Republic this trepidation now seems prophetic.

New information emerging from the Ukok Quiet Zone Nature Park suggests that the positive legal steps taken in June this year constitute only a false dawn in the fight to protect this plateau region. A sacred place to Indigenous peoples and a UNESCO world heritage site, it is theoretically protected by both international and Russian federal law; however, an old threat has returned and it has been extended to include the Uch Enmek Nature Park.

This threat comes in the form of a new decree, passed by Altai Republic authorities on the 2nd of August, which has, once again, given gas giant Gazprom permission to begin construction on the Altai pipeline. Aleksander Berdnikov, a leader in the region, recently mitigated this in a much criticized move, saying that the new listings of sacred sites must be monitored to “prevent barriers to the construction of bridges, roads and other structures.” The new decree bafflingly contradicts June’s protective decree and Russia’s assurances to several environmental organisations that the “Golden Mountains of Altai” would enjoy better protection, just months after they were made.

This pipeline, if built, will stretch from Western Siberia to China, has been threatening both the ecology and people of the Ukok plateau for some time now thanks to its stop start development. Much has been said and written about the potentially devastating environmental, social and economic consequences the pipeline could have.

Fears abound that it may degrade underground layers of permafrost vital to the above ground environment and limiting warming influences. The area is also prone to earthquakes and local peoples are rightly concerned that if the line were breached a catastrophic leak would result, profoundly damaging Indigenous livelihoods that rely on free range animal husbandry, fishing and hunting. It is also argued that increased activity in the area would negatively affect the regions endangered species such as the Snow Leopard and Steppe Eagle.

The pipeline’s proposed route through this region is also environmentally contentious on a more basic level. This point of view was expressed by head of nature protection fund Altai 21 Andrei Ivanov who stated that “since the world is concerned with stabilizing the climate, such unique and pristine territories should be protected.”

The Ukok plateau is also a profoundly important cultural zone. A sacred area to the Altai, Shor and Telengit Indigenous peoples. These groups commonly hold that the Ukok plateau is where the spirits come to hear the ‘Kai’, throat singing, of the people. It is a vital place of spiritual communion and also, for the Telengit especially, an ancestral burial ground with a history of well over 8,000 years of use. The plateau is home to countless burial chambers belonging to the ancient Pazyryk people and their descendants, noted by archeologists worldwide for their beautiful tattooing.

Today even archeologists are banned from exploring this region which, being bountiful with sites of sacred significance both natural and man-made, should be currently benefitting from greater protection. The new decree enacts a U-turn away from such protection, showing, if anything, that the regions true cultural and environmental value has yet yet to be acknowledged by authorities.

GreenPeace recently stated that the emerging plan for construction also “grossly violates Russia’s international obligations under the UNESCO convention concerning the protection of world culture and heritage.” The organization also noted that Gazprom subcontractors in the Ukok area were observed beginning exploratory drilling procedures before the new decree came into force on August 17th. Gazprom is charged with breaching terms on another level since it is clearly stated that such exploration is not to be begun without approval from the Federal Ministry of Natural Resources and a Federal Environmental Impact Report. Neither of these have been attained to date.

Thus emerges a consistent pattern of corruption and violation with Russia, the Altai Republic and Gazprom flouting regulations that have so far prevented Ukok and Uch Enmek from becoming a gas superhighway. Russia and China have not even reached an agreement over whether one will buy the gas channeled by this line and there is also strong evidence to suggest that the strife caused by the insistent and illegal efforts to disrupt the Ukok Plateau are entirely unnecessary.

In a recent statement Alexei Knizhnikov, head of WWF Russia’s oil and gas programme, revealed that “there are alternative routes that are better not only from an ecological, but also a profit perspective.” Save Ukok Coalition have echoed these sentiments calling the move “against all rational and scientific arguments.”

It is in light of these facts that the reinvigorated building programme and the decree which is allowing it have been called a “moral violence against people; ” not, it seems, that the powers care. Last year, a Gazprom representative stated that they would drive the pipeline “right through the Trinity Lavra of St. Sergius if we have to!” It is also believed that Vladimir Putin insists on the pipeline cutting through the Altai.

It remains to be seen how Russian and Altai authorities as well as Gazprom responds to international declarations of their dishonesty. Given their form of the past four months alone any reparative action must once again be treated with extreme caution.