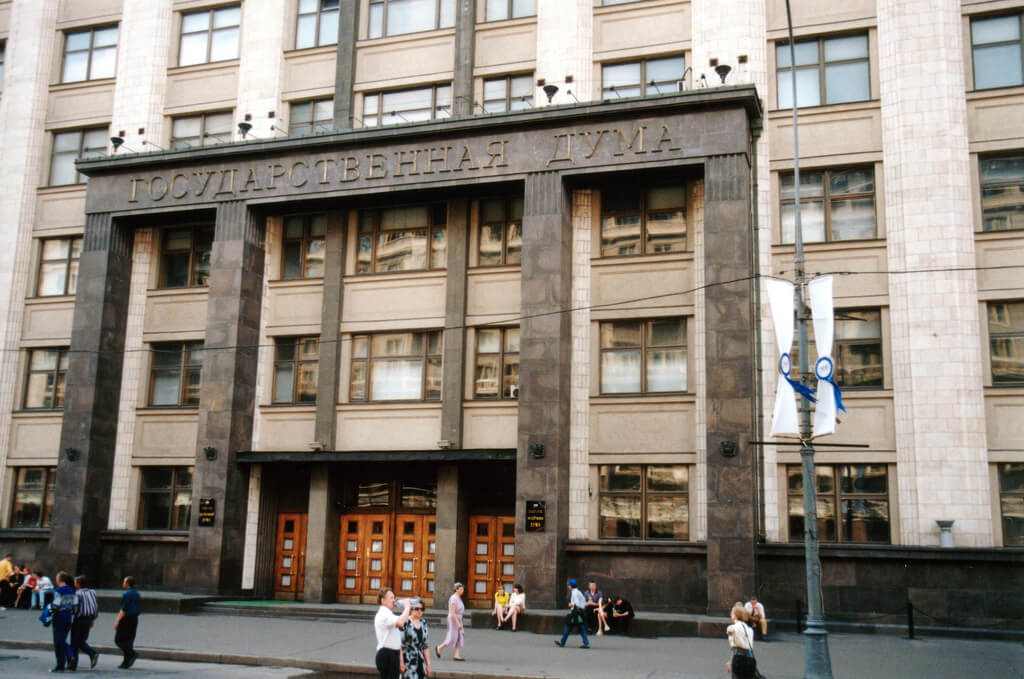 "State Duma" (lower house of the Federal Assembly of Russia) by PDXdj/flickr (CC BY-NC-SA 2.0)
Support our journalism. Become a Patron!

On 28 December 2013, in a rushed proceeding, after only two parliamentary readings, the State Duma adopted a bill amending the Federal Act “On specially protected conservation areas”, which may strip indigenous peoples “Territories of Traditional Nature Use” of any effective protection. Just two days later, the bill was approved by the Federation Council and signed into law by President Putin. The bill removes indigenous “Territories of Traditional Nature Use” (TTNU) from the list of “specially protected conservation areas, thereby removing their protection against unmitigated industrial exploitation.

The amendment continues a policy of weakening conservation legislation, which has been ongoing since the turn of the millennium and possibly constitutes the most severe threat so far to the regime of specially protected conservation areas, which has been in existence in Russia for almost 100 years. According to observers, the changes enable virtually unrestricted economic activity related to the use of nature reserves and national parks.

At the same time, it was alleged that the bill fosters potential conflict between locals communities and managements of specially protected conservation areas, in of particular national parks. The measure eases changing the boundaries of state nature reserves, national parks and other specially protected conservation areas, easing alienation of territories for industrial purposes, the downgrading of the protection regime and the introduction of fees for entering the territory.

Protections against extractive industries lifted
What causes the greatest anxiety of indigenous peoples is, that their Territories of Traditional Nature Use (TTNU) are no longer considered specially protected conservation areas and consequently are stripped of safeguards against economic activity, construction of roads, pipelines and industrial facilities. Restrictions regarding land use and resource exploitation no longer apply to TTNU and economic activities within their boundaries are no longer subject to state environmental expert reviews.

Oil companies hastening to reap the benefit
The subjects of the Russian Federation have been given a three months deadline to align their legislations with the Federal Act. Even before the deadline’s expiration in February 2014, Lyubov Malyshkina, vice director of the oil company “Surgutneftegaz” and a member of the parliament of the oil-rich Khanty-Mansi Autonomous Okrug, urged the region’s governor, Nalatia Komarova to follow suit. She asked the governor to strip indigenous peoples’ ancestral lands of their status as specially protected conservation areas.

Khanty-Mansi Autonomous Districts, which is also know as Yugra, today has about 560 registered ancestral lands, which under regional legislation are protected as TTNU. In order to obtain extraction rights, Yugra’s oil companies are required to negotiate cooperation agreements with the affected indigenous families.

Indigenous representatives trying to contain the fallout
Proponents of the change argue that the special status of ancestral lands, which since 2006 is regulated under a regional bill, will still ensure protection against unmitigated encroachment by oil companies. Indigenous people, however, expect that the abolition of the requirement for a the state ecological expert review, which comes with the change, will deprive them of their most effective leverage for asserting influence on the oil companies.

As was reported, the indigenous peoples’ Association “Save Yugra”, held a special session in Khanty-Mansiisk to discuss this issue. Participants of the session discussed the amendment to the federal act adopted in late 2013. They resolved to undertake an analysis of their impact on the livelihood of indigenous persons, pursuing traditional subsistence activities and if necessary to draft legal amendments to ensure continued protection of indigenous land rights.

A Member of the region’s parliament wrote in a memo addressed to Russian president Vladimir Putin:

“Since TTNU are no longer classified as specially protected conservation areas, there are no more impediments to their exploitation. Project documentation, reconstruction and construction of industrial facilities within their boundaries is no longer subject to a State environmental expert review. All of this may result in unmitigated industrial exploitation of the land”.

Regardless, even the initiator of the memo, Eremey Aipin, a Khanty author and vice speaker of the regional Duma acknowledges the futility of the initiative, which is unlikely even to garner support from the city council, which is wholly dominated by the oil lobby.