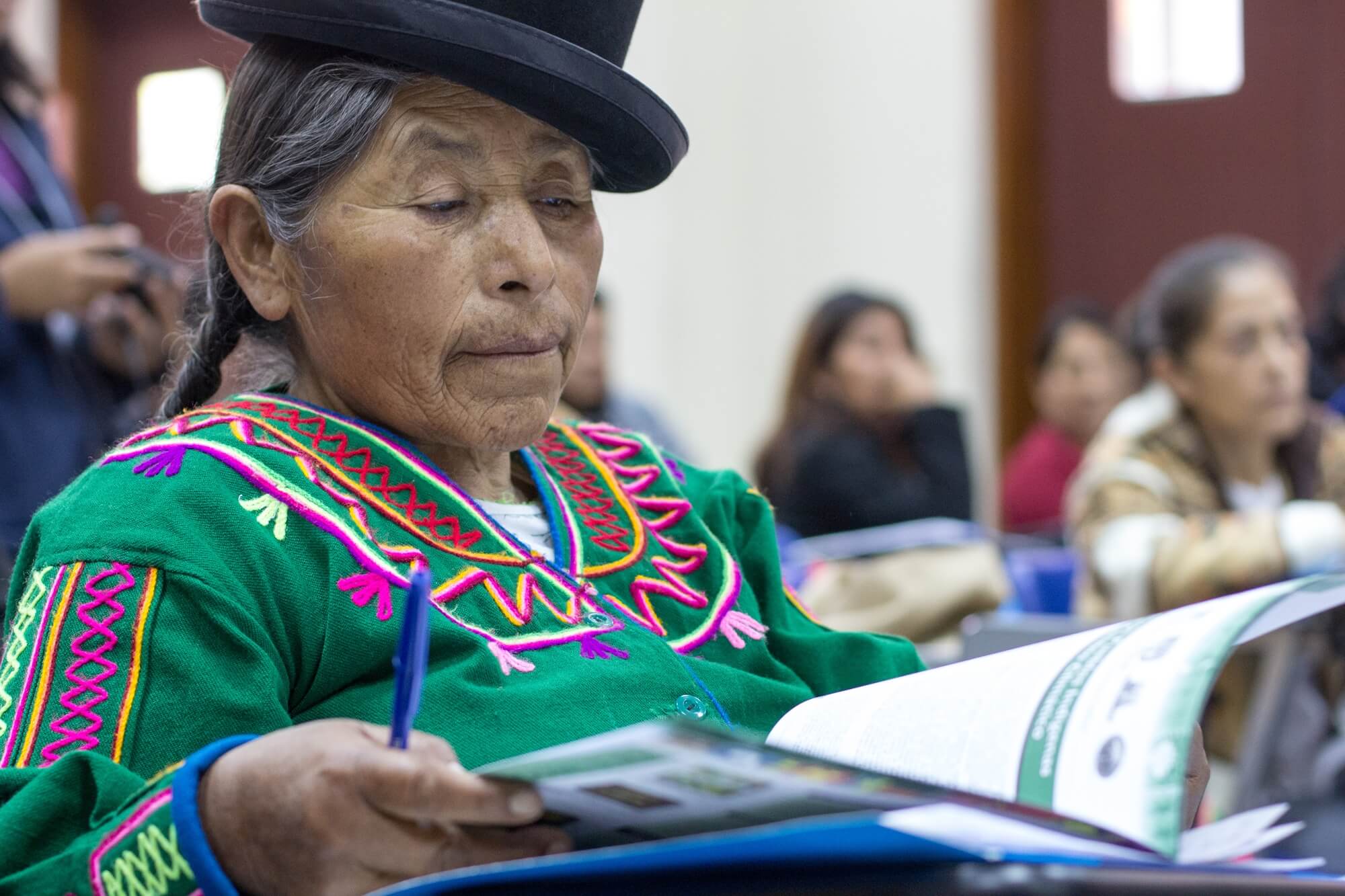 Rosa Palomino: “On the radio we care about our rights and Aymara culture”

Rosa Palomino is an Aymara social communicator with a long career as a radio host and political and social leader. She has been honored by the Peruvian Ministry of Culture and is a current member of the board of the Indigenous Communicators Network of Peru (REDCIP). Born in the Camacani community, Platería district, Puno region, she has been visible for directing Wiñay Pankara (Always blooming), an Aymara story-telling radio show that was first aired in 1988, and is hosted by Aymara-speaking women.

According to researcher Jacqueline Oyarce, this show “managed to tie political activity and radio, and contributed to redefine story-telling from a gender perspective”. Mrs. Palomino is planning to relaunch the radio show, while she remains politically active as president of the Union of Aymara Women of AbyaYala (UMA).

How do women participate in Wiñay Pankara?

Communication is the cornerstone of modern society. After realizing that Aymara women were shunned and marginalized, I started to work for my own culture. The show is produced by the sisters themselves. They contribute with interviews, testimonies, sociodrama and other formats. It is a cultural and educational show about the Aymara people’s vision of everyday life. We talk about our needs and requests (what we want for the Aymara people, whether our culture is valued…) and then we look for options. Aymara women invite me to their activities in their communities, assemblies or meetings. In return, I bring some material, mix it in an artisanal way, and air it.

I believe that it is our right to use new technologies. Appropriation is important. Now, inside my organization, there are also a lot of young Aymara professionals or students. There are media and communication professionals. My daughter Yeny studied Communication at the Universidad Nacional del Altiplano. She graduated some years ago and since then she has been working for the organization. There are also sociologists and anthropologists.

How does your radio program support the Aymara people?

Wiñay Pankara opened up a space for the Aymara people, and it has been recognized trough the Puno region. Women have lost their fear and participation in the media has empowered them. We women know our rights; we get to know our culture, women’s rights, wisdom. We are progressively working in this process.

How did you get started in radio?

My parents came from poor families. I have many brothers. I finished Elementary School at the age of fifteen. In order to study in High School I had to go to Puno and I didn’t speak Spanish. That is why I cried at home. My mother said I had to defend myself and face the situation. After all those blows, I learned Spanish. Then, I got elected as community development promoter of my community. I was told that a Peasants’ Congress was going to be held in Lima. I went to the city and started to cry because I couldn’t speak Spanish. I made too many mistakes… it was because of fear and anxiety that I couldn’t speak.

The event lasted three days and I didn’t speak for the first two. I was curious and Lima was such a fantastic thing. My husband already was with me at that moment. He bought me a book by Bolivian indigenous leader Domitila Chuncara and I read it cover to cover. It was a description and reflection over peasant and Indigenous women.

I got involved in a project with a German friend, Angella Mertzel, who was training women on how to lose fear. She told me that Indigenous women from the regions were very intelligent, but they weren’t given any opportunities. She wanted to create a radio show to change that situation.

She suggested we should launch a project about Aymara women in communication. At the moment of recording the script in Aymara I couldn’t read properly and gave up, but Angella told me: “You speak Aymara but you aren’t genuinely willing to do it.” I started to cry and expected her to tell me that I couldn’t do it, but instead she asked me to exert myself. At 4 p.m. the program finally aired.

We earn respect from authorities by speaking in the radio. Everybody listens to our participation and our words. Our sons and daughters also listen to us. We tell them about the situation of Mother Earth.

How does radio enhance Aymara culture and language?

We organize ourselves, affirm our rights, raise awareness among Aymara people, guarantee that our culture is appreciated; that men value the work of women… it helps a lot. For example, in one moment I said: “Who is going to listen to me?” “Why do you ask me to speak in Aymara?” Our children and grandchildren were told that it was wrong to speak our language. I told them: “I want to speak in Aymara” in order to make them understand the importance of our language. Now they say: “I am Aymara, I am a hardworking woman, I educate my children, and I sustain my house, the country too…” But it hasn’t been that easy. We have been through a lot.

What are your plans for the future?

My daughter is a professional Social Communicator and at UMA there are a lot of professional women. We have a school, training workshop, leaders… I’m passing already, but I’m not going to keep for myself all that experience and that’s a relief. I always say that I wanted to work until I die, I will leave communication at the graveyard’s gate. The day I leave, I don’t want my family or anybody to cry. They simply should listen to the recordings I have at home. There are a lot of special programs for Women’s Day, Mother’s Day, Peasant’s Day, Rural Women’s Day, and many more. They should listen and say there she is, Rosa Palomino, alive. Nobody should shed a tear. That is my decision.

Interview originally published in Spanish at Servindi. Translated to English by Servindi and re-published at IC under a Creative Commons License.