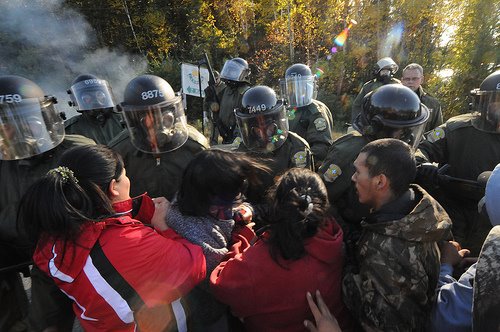 Quebec’s provincial police and riot squad have arrested five Barriere Lake Algonquins, including Acting Chief Benjamin Nottaway, during a series of roadblocks that were set up yesterday on highway 117.

The initial roadblock was set up in the early morning by at least 70 Algonquins and 30 non-native supporters, with the hope of maintaining it until the Canadian and Quebec governments committed to a set of agreements they’ve signed with the community. The group also demanded that Canada respect the Algonquin’s system of governance and let the customary leadership selection process move forward.

Unfortunately, as with October 6, the police were given the go-ahead to take matters into their own hands. They dismantled the morning blockade, and placed everyone on notice that the riot squad was on its way.

However, the protesters refused to back off–choosing instead to erect a replacement blockade. And when that one came down, they erected another and then another.

All told, four blockades were set up. The last one came down at about 2:30 pm, which is when the riot squad broke formation and chased down Chief Nottaway.

“His was the second targeted arrest of the day”, explains the Barriere Lake Solidarity committee. “Community youth spokesperson Marylynn Poucachiche, mother of five and organizer of the community school, was [also] arrested at one of the morning blockades after being reassured by police that no arrests would be made since protesters had agreed to leave peacefully.”

Another community member was shoved to the ground and then kicked by several officers before he was arrested. “The police dragged him with his head on the ground all the way to the police car,” said one observer.

The fourth person arrested, a woman elder from the community, fell and hit her head while being pushed back by the riot squad. “I don’t know if she was unconscious from the head trauma. The police didn’t let her family pick her up but instead arrested her,” said another observer, who adds that there were at least four camera people there “who are currently working on a news piece to produce and publish within 24 hours.”

What you can do to help

If you’re in Toronto, protesters will be gathering on Friday, November 21 at 12 noon, at 20 Queen Street west — to demand the immediate release of these political prisoners and that all charges be dropped. The protesters will also affirm the Algonquin community’s demands briefly described above.

If you’re not in the area but would still like to help, you can send letters to following the politicians (sample letter is available here):