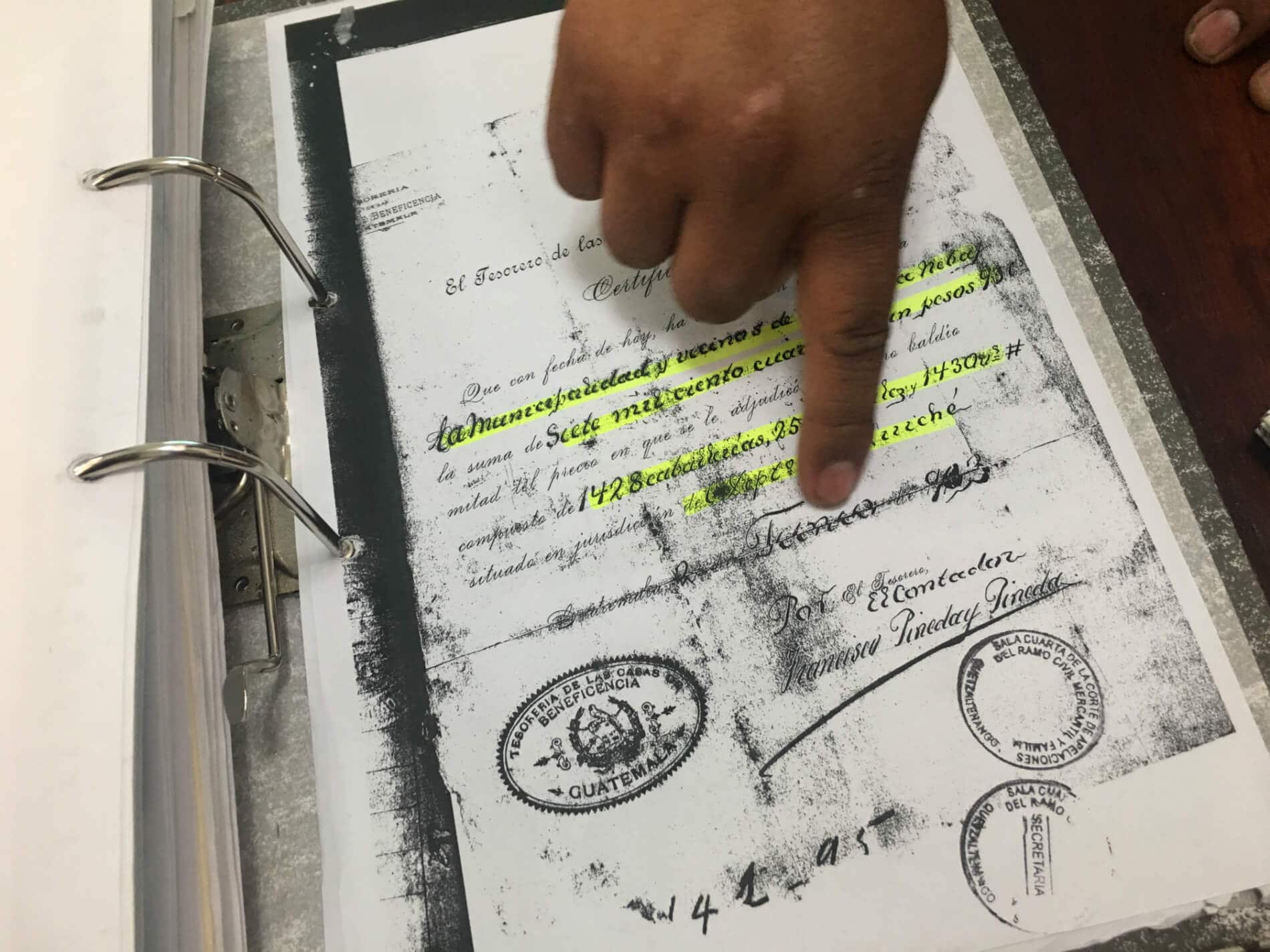 Rewriting the Past Through Litigation

How Maya Lawyers are Rewriting History to Recover Stolen Lands in Guatemala
Certificate of land owernship issued by the Republic of Guatemala to the Maya Municipality of Nebaj. Maya ancestral lands were framed as “wastelands” by the new Republic and sold again to their Maya owners. Indigenous peoples subsidized the making of the new state as they were forced to buy their own lands.
Support our journalism. Become a Patron!

Over the past few centuries, Maya communities have faced multiple forms of state-led dispossession, structural exclusion and overt genocide. But their struggle doesn’t only exist in the past. While the political arena has changed countless times, the Maya continue to defend their lands, their communities, and their lifeways against ever-evolving forms of colonial theft and violence.

A distinguished group of Maya lawyers embody this ongoing struggle as they strive to create a better future—using the tools of the state to correct historical wrongs and defend their right to exist in a system that is designed to destroy them.

No small part of this effort involves challenging apartheid in Guatemala courtrooms.

The Rigoberta Menchú Foundation did this explicitly, in 2005, when Indigenous lawyer Benito Morales won a case for racial discrimination after the grandson of General Rios Montt and a female legislator attacked Nobel Peace winner Rigoberta Menchú with racist slurs in the Constitutional Court. More legal claims followed, challenging oppression in the very courts that enable it.

The Association of Maya Lawyers, Nim Ajpu, consists of a broad legal team that is defending Indigenous rights across Guatemala. Their goal is to advance Indigenous rights in the legal and political system, eventually taking cases to the Inter-American system of human rights when domestic resolutions reiterate racist patterns.

But to defend indigenous rights in Guatemala today, Maya lawyers can’t limit themselves to simply revisiting the wrongs of the past. Sometimes, they also have to rewrite history.

One emblematic example is the trial against former Dictator General Efrain Rios Montt for the genocide of Maya Ixil communities. At least 200 thousand people were murdered during Guatemala’s “war” (1960-1996), with many massacres occurring under Rios Montt’s rule in the 1980s. What was called “war” looked more like genocide; because systematic massacres against Maya communities were carried out with the same patterns across Guatemala. Entire communities were disappeared, emptying territories that were grabbed by the military. 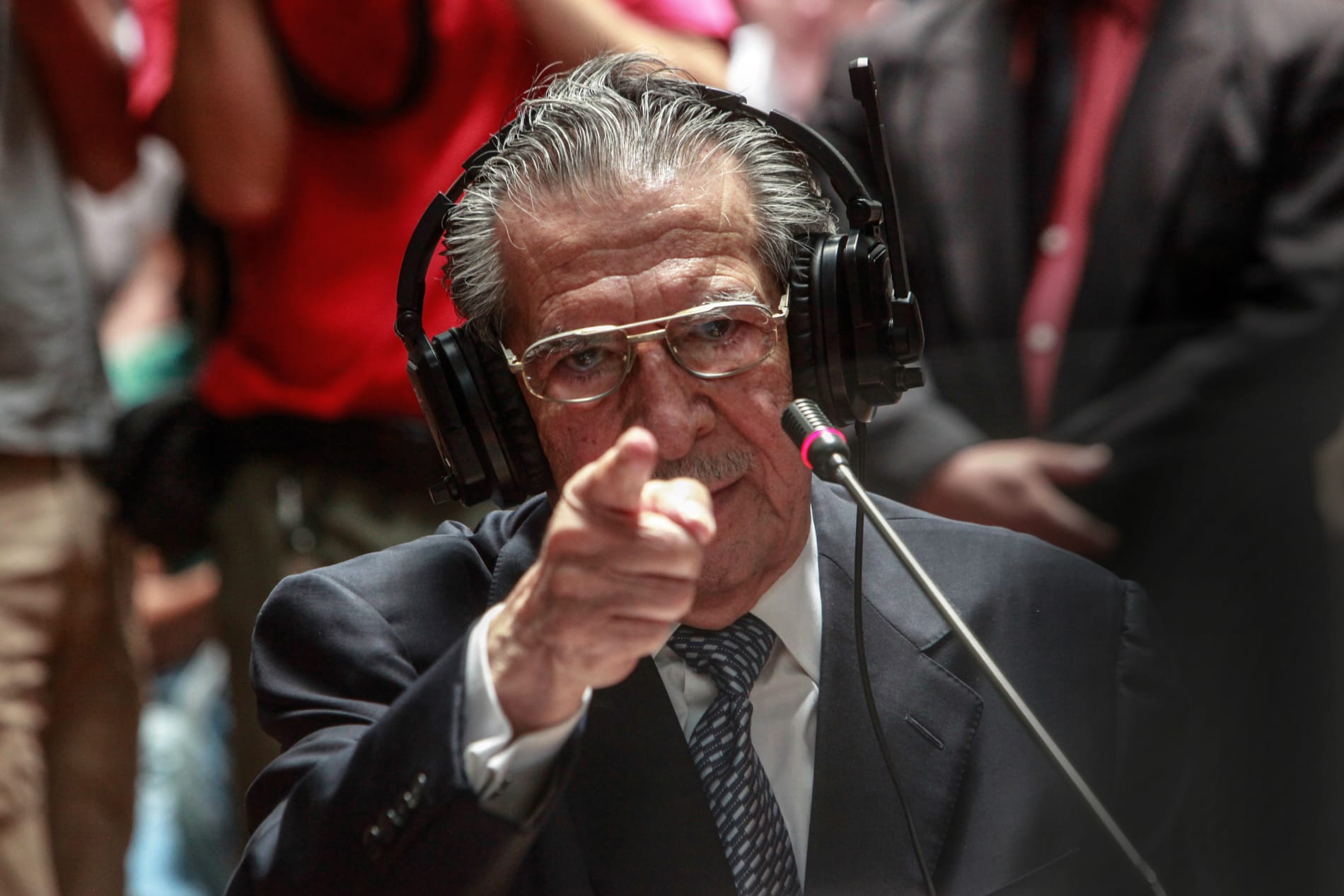 General Efrain Rios Montt testifying during the trial. He declared himself innocent: “I am innocent. I never had the intention of destroying any national ethnic group. My role as head of State was specifically to bring the nation back on track, after it had gone astray.” Photo: Elena Hermosa.

A peace treaty was signed in 1996, but official history failed to recognize the massacres for what they were. In 1998, lawyer Edgar Pérez started a long process to frame the systematic massacres of Maya Ixil communities as a state-led genocide. His legal team at the Bufete para los derechos humanos achieved what seemed impossible: to place General Rios Montt on the bench of the accused.

In 2013 he was sentenced to 80 years in prison for genocide and crimes against humanity.

The conviction was unacceptable for the military elites of the apartheid state. They forced the Constitutional Court to annul the sentence for “lack of due process” and ordered a new trial.

When the second trial finally ended in September 2018, Rios Montt had died, and the verdict absolved his chief of military intelligence who was simply “obeying orders.” 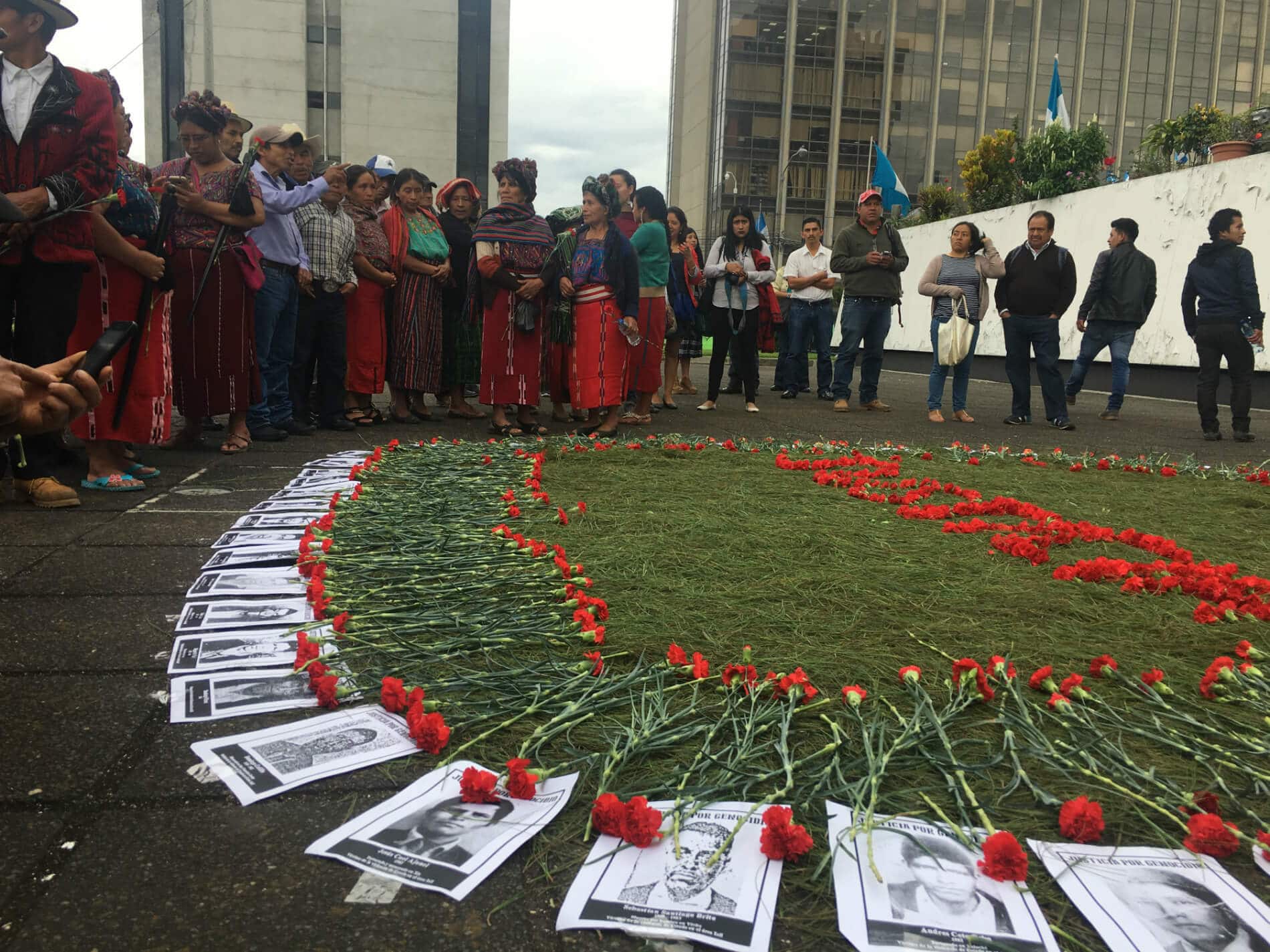 Survivors of the Maya Ixil genocide ordered by Dictator General Efrain Rios Montt during the early 1980s organized a ceremony in memory of the dead as they awaited for the final verdict outside the Court in Guatemala City on September 26 2018. Photo Manuela Picq

The best litigation could not convict those who ordered the genocide. But the court did recognize that the massacres committed by state of Guatemala against the Maya Ixil constituted genocide.

This twenty year process gave a truth certificate to the survivors. It puts a name on what they survived and legitimates their collective memory. This litigation forces Guatemala to rewrite its national history.

Rewriting national history is crucial to recover lands that were stolen during the genocide.

Take for instance the case of Sololá, one of the oldest and best organized Maya municipalities in Guatemala. The Indigenous Municipality of Sololá has maintained its political assemblies since pre-conquest times, with 75 mayors that meet on a weekly basis to govern 80 communities. But during the genocide the military appropriated portions of Sololá territory – then kept them subjugated under state control.

Now Sololá is trying to recover these recently stolen lands with the help of a team of Maya lawyers that specializes in defending territories, called, the Bufete para pueblos indígenas.

Juan Castro, Jovita Tzul Tzul, Eddy Aspuac and Jose Luis Puac Quel know the value of community life. They know what it means to be Maya in a state of apartheid like Guatemala, and they know how central territory is to maintain Maya lifeways. As Jovita Tzul Tzul says, “We are community, we are active participants in our communities, the collective is part of our lives.” 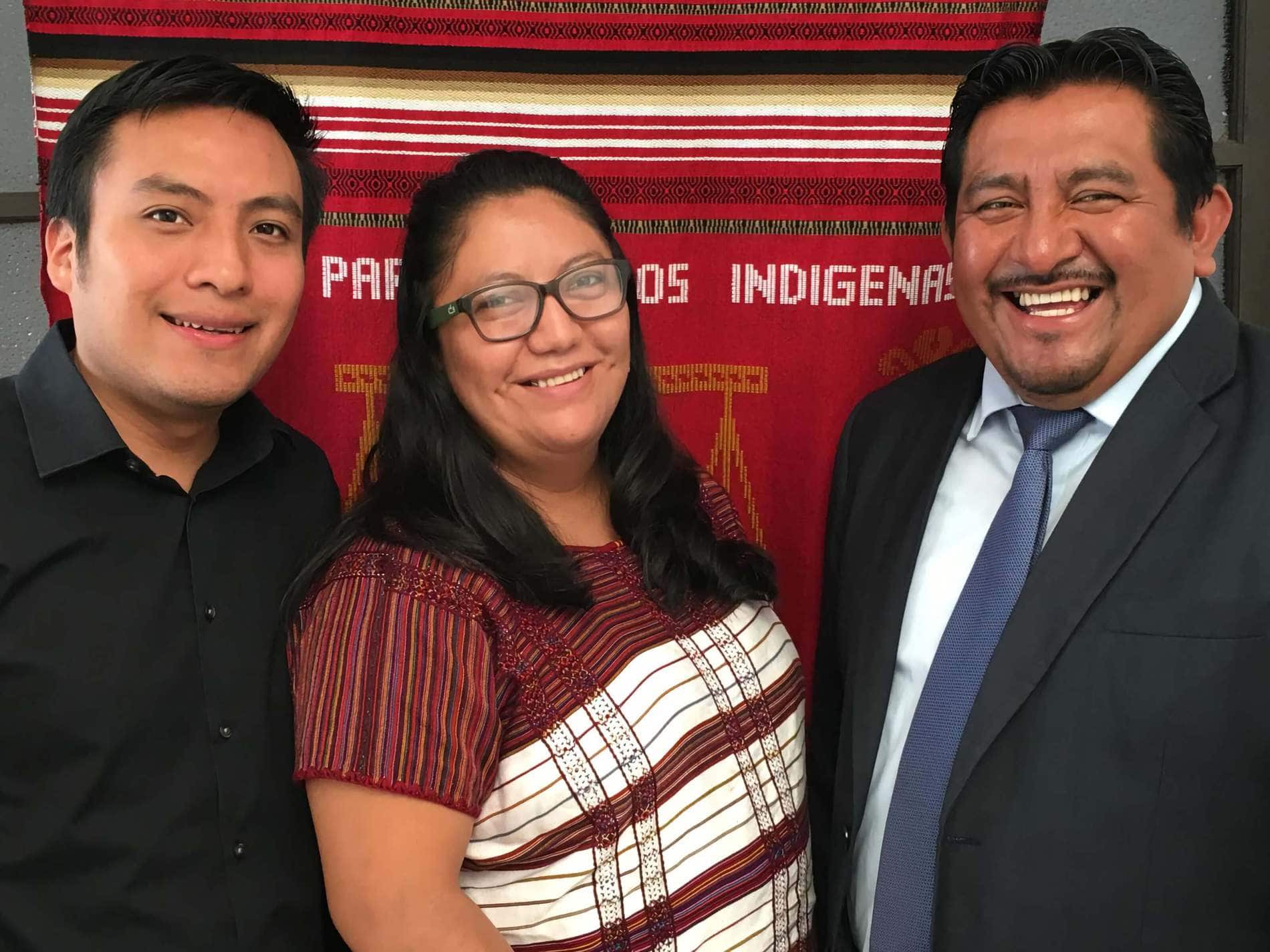 This team of lawyers handles a diversity of cases–over 50 in total. They are litigating to defend indigenous rights to prior consultation, like a case now at the Supreme Court against the Pojom hydroelectric project that deviated a river without consulting the community. They often defend Indigenous authorities who are victim of lawfare for defending their communities from extractive industries, like Maria Magdalena Cuc Choc and political prisoner Abelino Chub.

As different as the many cases of the Bufete may seem, they all have one thing in common: the defense of Maya territories.

The Bufete needs to do a lot of historical and anthropological research to set the record straight.

Their central challenge is to revert the settler colonial narrative of terra nullius, which framed native territories as empty wastelands to justify the invasion, take over, and dispossession.

Maya communities have had to buy their own land time and again, first from the Crown of Spain, then from the modern liberal state, only to have them stolen over the last decades. The Maya lawyers have to remind courts of the colonial history of dispossession to argue for Maya authority today.

Nebaj’ is a good case in point. The Maya K’iche’ of Nebaj’ were forced to buy their own territories from the Spanish Crown, then they had to buy their lands again from the newly formed modern-state of Guatemala. The community has documents from the seventeenth century with evidence of the amount they had to pay the Crown in order to get a title, as well as documents issued by the new republic in 1881 indicating the amount that each family contributed to buy their own territory. 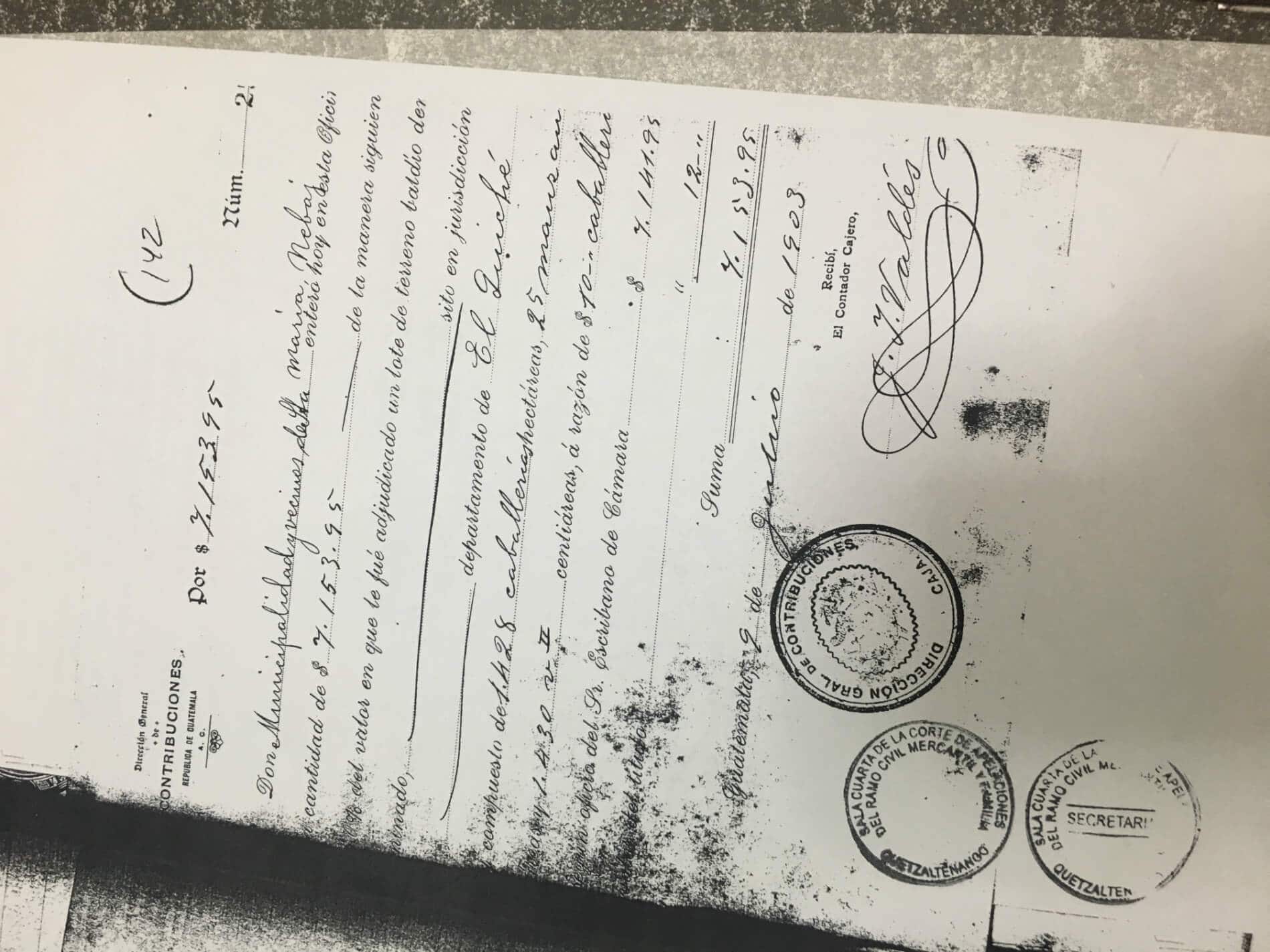 A 1903 document issued by the newly formed Republic of Guatemala sells “wastelands” to the Maya K’iche’ Municipality and “vecinos” of Nebaj, including cost and surface. Maya communities had to buy paper titles first from the Crown then from the Republic to maintain their territories.

Despite having these records, a couple of decades ago, Guatemala forced an administrative assimilation and redefined them as a municipality. The Bufete took the case, and successfully used litigation to correct history: The Court recognized the Maya K’iche’ authority over 67 thousand hectares of land in Nebaj’.

Another similar case the Bufete is handling is the Ch’orti’. The Maya Ch’orti’ have land titles all the way back to the early times of conquest. The Spanish Crown issued documents delineating Ch’orti’ territories in 1641, then issued land titles in 1777 that explicitly recognized the “peoples” ownership over communal lands. But after independence, the modern nation-state of Guatemala conveniently decided not to recognize these titles issued by the Crown, and appropriated Ch’orti’ territory through the National Registry of Property in 1899. 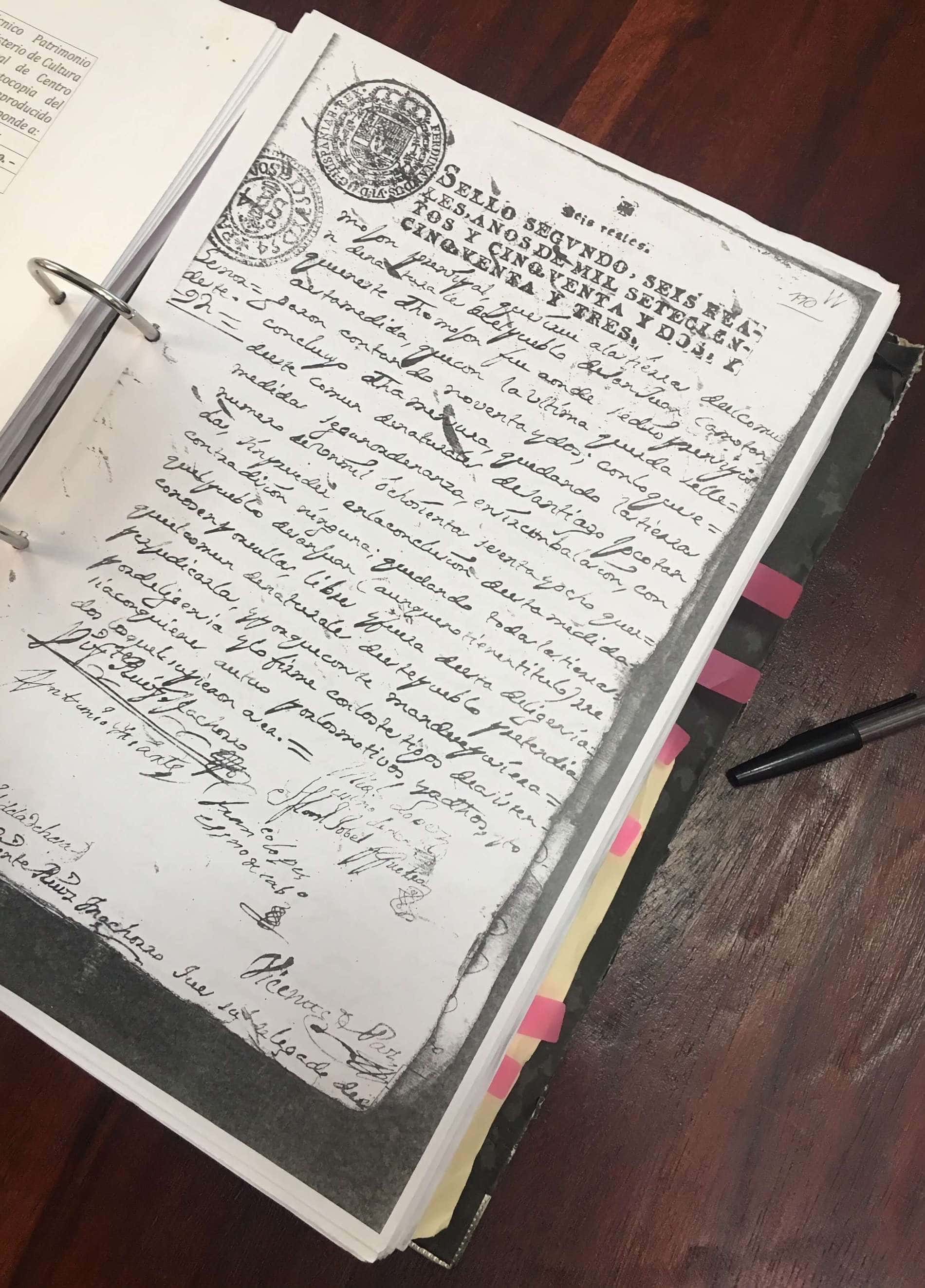 Title issued by the Spanish Crown, with the Rex sealing on the upper left, that establishes the price of buying of the communal lands of Jocotán by the Ch’orti’ and their ownership over these territories. Photo: Manuela Picq

Juan Castro explains they are using colonial legal history to fight colonial dispossession. “We are not inventing anything; just defending territories with legal documents issued by the very colonial powers”. They are using the land titles issued by the Crown of Spain to have Maya Ch’orti’ territories recognize by today’s government. Two years of litigation has so far been successful with the recovery 28 thousand hectares of Ch’orti’ territory.

This litigation between Maya owners of ancestral territories in practice and the state’s recent ownership on paper is emblematic of a history of dispossession achieved through state bureaucracies. This is one of the reasons why the Maya lawyers of the Bufete say they litigate for communities, not individuals.

They engage community perspectives to strengthen the community fabric. They seek the full recognition of Maya communities as subjects of rights, with self-determination to solve its own conflicts and govern its territories. For them, indigenous rights are not enough: they want to transform the state at its very core because the Guatemala is not post-colonial nor emancipated, it is still founded on the principle of occupation.

The invasion of Maya territory and elimination of Maya peoples is not an event of the past, it is embedded in the structures of today. Similarly, the stealing of their land is not a historical episode linked to the Spanish invasion, but rather a defining attribute of Guatemala’s modern state.

Maya lawyers are rewriting Guatemala’s history, one case at a time, to change the structure of apartheid. “It is our duty,” concludes Juan Castro.