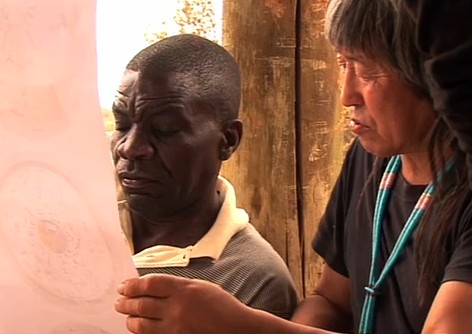 A special gathering of indigenous leaders from South Africa, the Colombian Amazon, and the Russian Republic of Altai; and the story of how the vhaVenda People learned to create an eco-cultural map of their sacred sites and territory.

In November 2009, the vhaVenda People welcomed a group of Indigenous Leaders to their territory in northeastern South Africa.

The Leaders travelled from Siberia and the Colombian Amazon to help the vhaVenda create an eco-cultural map of their ancestral land.

this twelve-minute film, Reviving Our Culture, Mapping Our Future, produced by the Gaia Foundation, documents this important effort, which has helped the vhaVenda gain a clear picture of what has happened to their culture and territory from years of industrial development. It has also helped the vhaVenda to revalize their culture, and give them insight toward what they must do to maintain and restore their land for future generations.

By the Gaia Foundation

The vhaVenda people are known as the “Rainmakers” in South Africa. They are a matriarchal tradition where the ecological knowledge which guides the governance of the community is held by women, known as makhadzis. Many of the makhadzis are also custodians of sacred natural sites and are responsible for the associated community practices and rituals to keep order in the community and the ecosystem.

The impact of colonization and the industrial process has fragmented communities, changed power relations and destroyed the rich biodiversity and forests of the extraordinary Soutpansberg mountains, in which their territory is located, in northeastern South Africa. Industrial plantations, mining and tourism are some of the major forces of destruction in the area.

The makhadzis are deeply pained by the destruction of their traditional territory and especially the sacred sites. Accompanied by Mupo Foundation, our South African partner, they began a process of reviving their knowledge and practices to protect the sacred sites and the associated tradition of seed diversity, bringing young people and the chiefs onboard.

The makhadzis began to sketch the relationship between the sacred sites, showing how these sites are critical places within the ecosystem – natural springs, forest, wetlands, river basins and waterfalls – which maintain the health and resilience of their ancestral territory.

With support from the African Biodiversity Network and the Gaia Foundation, a community exercise in ecocultural mapping was then carried out, in November 2009.

More than 70 vhaVenda people took part, mostly from Tshidzivhe community, guided by trainers in eco-cultural mapping from Colombia and accompanied by indigenous leaders from the Colombian Amazon and the Russian Republic of Altai.

Women, men and youth spent six days mapping. It was a time for deep reflection as the elders shared their knowledge of the territory, the sacred sites, the traditional practices and rituals, many of which are on the verge of being lost.

Remembering the territory, the sites of ecological and cultural importance, the role of ritual

The first map of the ancestral order of the territory, reflects how things were when the community was living traditionally. This is still in the living memory of the elders – when the territory was teaming with wild animals, forests and had abundant rain.

The second map was of the present. This, they said, is the map of disorder – where the forests are destroyed, there are no more wild animals, rivers and lakes are drying, the rainfall has radically fallen and the traditional crops have almost disappeared.

The final map is of the future – the vision of how the communities wish to regenerate the territory and rebuild their communities. They have already begun to build their future now – such as elders teaching in schools to revive traditional seed diversity, and working with Mupo Foundation to restore and strengthen their bio-cultural knowledge and practices.

As the different maps were completed the makhadzis sang and danced in celebration! They had unearthed a new capacity to express their traditional ecological knowledge so that the community can hold a collective vision. Based on this experience they are planning to develop more detailed maps around each sacred site. These will be used to negotiate with the government to recognize and protect each site and the connection between them. In the face of climate change, the health and vitality of ecosystems is critical. This is the basis of ecological and community resilience.

Eco-cultural mapping involves all the community, especially the elders. Aside from local knowledge and wisdom, it requires no technology and only the bare mininum of materials – making it an exercise that is easy and for communities to continue mapping on their own. In the Colombian Amazon, for example, it has proved an exceptional tool for indigenous communities to reconnect with their territory, strengthen their culture and protect the rainforest.

African Biodiversity Network members from Kenya and Ethiopia, and indigenous people from Altai, who participated as trainees in the mapping, plan to start eco-cultural mapping in 2010.