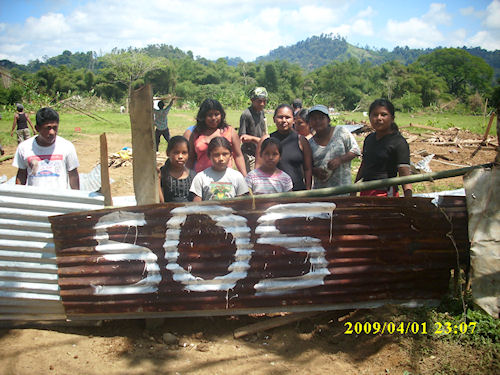 Respect for human rights, territory and culture of Naso Village

The Alliance for Conservation and Development, www.acdpanama.org, is heading a solidarity letter campaign for the indigenous Naso People in Northern Panama, who were dispossessed from their lands and violently repressed by police on March 31, 2009.

If you would like to join the campaign, please send a reply, along with your full name, nationality and contact email, to acdpanama@gmail.com or contacto@panamaprofundo.org. If you belong to an organization you are also welcome to include its name.

Please also send this note to your contacts so that more people can lend their voice in solidarity to the Naso people.

The undersigned organizations and individuals want to show publicly their support and solidarity to the people of Naso communities of San San and San San Drui that since last March 31 suffers the abuse of their human rights, territorial and cultural rights. The Panamá Ombudsman confirmed that the eviction operating of 17 families Naso has been committed “abuse of power” and is not guaranteed “due process”. Furthermore, the direct testimony and documentary evidence show the arbitrary and excessive use of force, destroying some 30 homes and buildings in the community, affecting the health of children and leaving least 150 adults and 65 children and girls without roof. Once again the interests of a company, Ganadera Bocas, have been over the rights of aboriginal peoples. For all these reasons we ask:

The Government of Panama:

To the people of Panama: