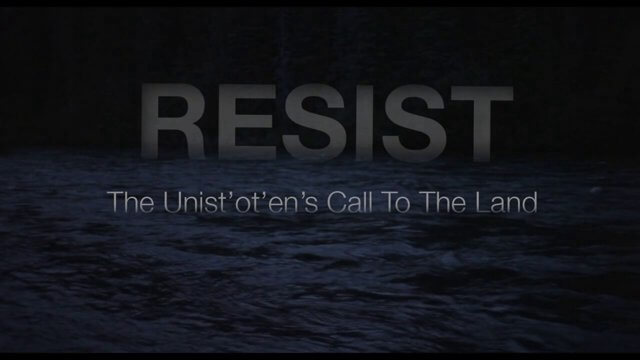 RESIST: The Unist’oten Call to the Land

RESIST: The Unist’oten Call to the Land is a documentary film that visits the fourth annual Environmental Action Camp, hosted on unceded Wet’suwet’en territory by the Unist’ot’en(C’ihlts’ehkhyu/Big Frog) clan. By re-instituting a Free, Prior, and Informed Consent Protocol on the bridge over Wedzin Kwah into their traditional territories, the Unist’ot’en are reasserting their indigenous sovereignty and standing up to industry and government who want to destroy their lands The focus of the film includes the exploration of the environmental, legal, and social issues surrounding hydraulic fracturing, tar sands, and the proposed Kinder-Morgan, Pacific Trails Pipeline, and Enbridge Northern Gateway Pipeline projects in British Columbia. The film’s themes also include indigenous sovereignty and decolonization, as well as documenting one of the most important resistance camps in North America and the movement it is a part of.

The people of the area gave notice in 2006 of their opposition to the Pacific Trails Pipeline and accused the company of avoiding consultation with the hereditary owners and chief, by approaching individual bands and tribal councils. The companies involved, Apache Canada and Chevron Canada in a 50-50 ownership agreement, tout in press releases that they have the support of 15 of 16 Indian bands, which only have jurisdiction on reservations. The film examines the differences between the imposed colonial Indian Act and the traditional governance systems of hereditary clans and chiefs.

The camp is also in the path of the Enbridge pipeline, another project the people oppose, which would carry tar sands oil through the territory. A unique aspect of the Liquid Natural Gas (LNG) that the Pacific Trails Pipeline would carry to Kitimat for export to Asia, is that it is produced using a process called fracking. There is a sizable shale deposit of LNG in northeastern BC, around the areas of Fort St. John and Fort Nelson, whose rivers and creeks flow to the Liard River and other tributaries that eventually empty into the Arctic Ocean. This particular process of extraction is particularly toxic to eco-systems because it involves injecting chemicals into the earth and creating small explosions, and these chemicals seep into the shale formation releasing gas, but also poisoning aquifers and water sources, despite safety measures. If the Pacific Trails Pipeline is built, it would pave the way for Enbridge and other proposed gas and oil pipelines, what has been called a “Carbon Corridor.”

Through the construction of a cabin, a traditional pithouse, and permaculture garden on the proposed pipeline routes, the Unist’ot’en and their allies have thus far been successful at preventing construction on the projects that would illegally cross into their territories and cause further damage to their traditional food systems and ways of living. The Unist’ot’en people ask for grassroots support in their fight against corporations and industries aiming to destroy this beautiful land they live on. We aim to not only create a window through which the viewers can witness the ongoing struggle faced by the Unist’ot’en, but help them engage in the movement as they see fit, as the issues explored in the film have moved outside of the indigenous sphere and are destroying an environment which we must preserve in order to continue to exist as a species. By creating a piece that is not only educational and motivating, but also artistic, we hope to leave the viewers with a desire to expand on what we have given them and add to the collective story of history in the making.

The environmental, racial and social issues of this movement effect EVERYONE of US ! GET UP ! GET OUT AND RESIST !

More information on the Uni’stot’en People and there camp can be found at – unistotencamp.com