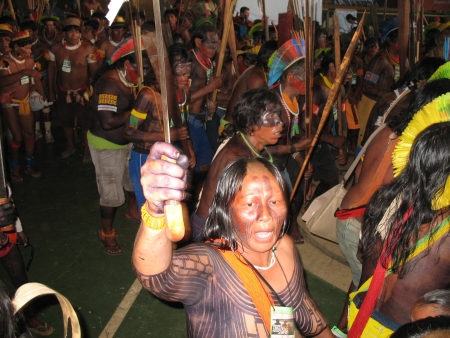 Reportback from ‘the Xingu Encounter’

A similar gathering took place in 1989, “where the Kayapó and other tribes from the Xingu basin rejected the Brazilian government’s plans for a series of six hydroelectric dams on the river. As a result, the World Bank cancelled a loan for the dams, and plans to dam the Xingu were suspended for more than a decade,” notes survival International.

In recent years however, Brazil has again set its sights on the Xingu River, making it necessary for the Kayapo, Parakana, Asurini and others to once again come together in defense of the Xingu.

According to International Rivers, who has numerous updates about the encounter on their website, the primary focus was on protesting “the Belo Monte Dam, whose construction would result in the displacement of 500 indigenous Brazilians, and 16,000 other people, create the need for the construction of four other dams to store water during the dry season and also destroy the natural resources upon which these local people survive.”

There was also a powerful (some say shocking) follow-up to the 1989 gathering. On May 20, the second day of the encounter, “a representative of the Brazilian electric company Electrobras was rushed by a machete-wielding group of indigenous women and men angry at his disregard for their concerns,” explains the root force group.

Eletrobras representative, Paulo Fernando Vieira Souto Rezende spoke of the need for new dams to meet increasing electric demand in Brazil. During his speech, non-indigenous farmers and river dwellers became angry and began to chant and boo. When the speech was finished, a group of indigenous women and warriors rushed the stage, brandishing machetes and war clubs. The apologist for genocide was shoved to the ground and poked with a machete , cutting his arm. He was pulled away by conference organizers and taken to a hospital. [The Woman who cut Rezende’s arm was Tuira Kayapo — the same woman who slapped an Electrobras official with her machete at the 1989 gathering.]

While NGO groups that had organized the conference disavowed the violence, they emphasized that indigenous people have good reasons to be angry and that much greater violence is regularly practiced against them by the Brazilian state and corporate interests.

The rest of the encounter was without incident. However, the attack “set off a series of recriminations, aimed at discrediting the movement,” reports International Rivers. However, “the Kayapó re-oriented their actions towards moving forward in their defense of the Xingu.”

Calling the regional Federal Attorney to the table, the Kayapó brought all their chiefs to address him, saying “we are authorities of our people, too. We want to make it very clear how we stand regarding the dams planned for the Xingu.”

One chief brought his daughter with him. Embracing her, he said “What I am saying is not for me – it is for her, and for my grandchildren. We want the waters of the Xingu to be clean, and full of fish.”

The warrior spirit was put forth as a warning. “We ask you to tell (president) Lula that we will not accept dams on the Xingu. If they try to build dams, there will be war.”

Kayapó women are very strong and direct, and do not wait to take their cues from the men. On several occasions, women seized the opportunity of an idle moment to dance to the middle of the floor, and make impassioned statements against the dams. “You have no right to destroy our river. The mothers of the Xingu will not allow it.”

On the final day of the meeting, the meeting participants and people of Altamira gathered at the Prainha, on the banks of the Xingu. One by one, the diverse indigenous tribes began arriving, each one entering the circle with a powerful dance and chant, to loud applause. A group of children about eight years old chanted “Viva Rio Xingu.” The Kayapó again called their chiefs to stand in front of the gathering. “We want to show you how Kayapó feel about the Xingu.” And, a group of Kayapó women carrying their babies entered the clean waters to bathe them. Then, Kayapó youth began an exuberant splash-fest, throwing water on each other.

To learn more reports on the gathering, please visit this blog post by the Rainforest Action Network, and the Indigenous People’s Cultural Support Trust website, which is devoted exclusively to the Encounter.

You may also want to look at the Final Declaration of the Indigenous Peoples Participating in the Xingu Forever Alive Encounter.

Al Jazeera’s Gabriel Elizondo reports from Altamira, Brazil in this feature on the impacts of the Belo Monte Dam and on the Xingu Encounter 2008.