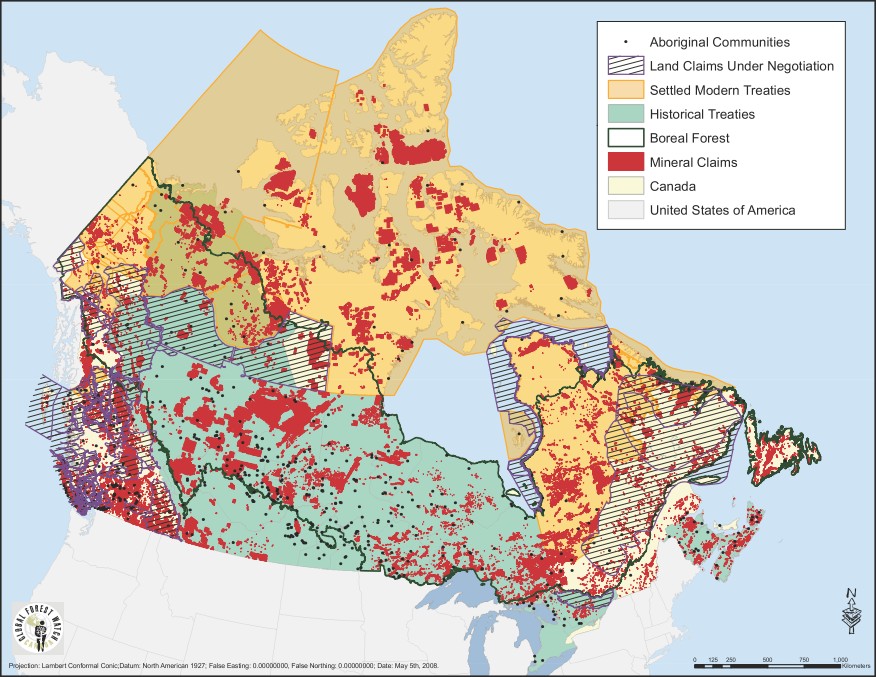 The International Boreal Conservation Campaign (IBCC) has just released a report that reveals the entire array of potential (and ongoing) land conflicts that exist as a result of Canada’s outdated (colonial) “free entry” mining law.

The report is titled “Mining Exploration Conflicts in Canada’s Boreal Forest,” and you can download it at the IBCC website..

See below for a press release about the report by the Canadian Boreal Initiative. Also, here’s a detailed map showing Mining Claims, Indigenous Communities and Treaty Lands in Canada.

May 14, 2008 – A report and set of maps released today offer a first time overview of the extent to which mining claims staked under an outdated free entry system conflict with Aboriginal rights, private landowners, conservation, wildlife, and other values in Canada’s Boreal Forest. The report calls for modernizing the mining law.

Over a half-million sq km of mineral claims are currently staked across Canada’s Boreal Forest under a “free entry” tenure system implemented 150 years ago during the Klondike gold rush era. Under the free entry system, mineral rights are acquired automatically without consideration of other land-use priorities or the prior and informed consent of affected Aboriginal people. Ten per cent of Canada’s vast Boreal Forest is staked for mining. “We are living in the 21st century with a mining law that dates back to the colonial era. It needs to be reformed,” noted Larry Innes of the Canadian Boreal Initiative, “Social and environmental objectives – such as resolving Aboriginal land claims and ensuring conservation planning before development–should take precedence but under the current system, mineral rights are given first priority.

“Developing world countries have generally done a poor job of protecting indigenous rights from the pressure of mining interests. The world expects a country like Canada to demonstrate enlightened leadership, not to throw First Nations chiefs in jail,” noted Steve Kallick of the International Boreal Conservation Campaign.

“In our analysis, reforms are not only necessary, but readily achievable,” concluded Innes. “Moving to a modern system that enables rational planning, accommodates Aboriginal rights, and takes other values into account before decisions are made makes good sense on environmental, social and economic grounds. Such reform will promote a viable climate for investment, ensure protection of critical habitats, and improve opportunities for Aboriginal and Northern communities to benefit from responsible mineral exploration and development.”

The report calls for fundamental legislative and industry reform to resolve current conflicts and prevent future ones. This would include replacing the free-entry system with a permitting system for prospecting and exploration; requiring exploration and mining activities to conform to land use plans; requiring prior and informed consent from affected First Nations; and improving environmental standards for exploration.

Private property owners:
Marilyn Crawford, (613) 273-4511, marilync@rideau.net. Had her Ontario property staked and has now been working on the free entry issue since 2002.