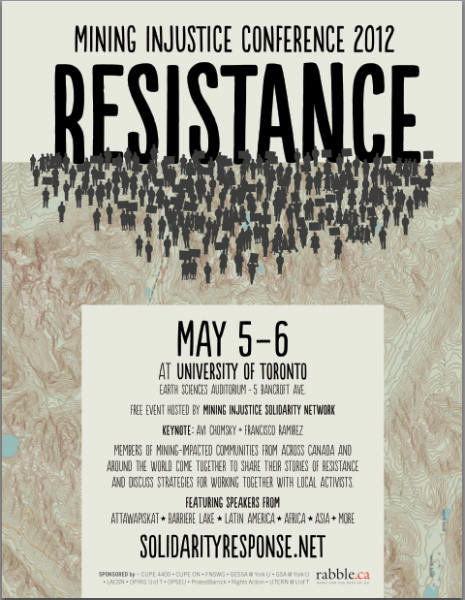 This is the first of a two-part feature examining the fourth annual Mining Injustice Conference, which ran from May 5-6, 2012 in Toronto, Ontario, Canada.

Canada loves to follow the lead of the mining companies it so faithfully incorporates, and why not? They get to make new friends, they get to make lots of money, and they get to play games of intrigue without consequence; well, most of the time. They love holding expensive banquets too, don’t they? And let’s not forget the satisfaction the derive from the oft-pledge that really, everything couldn’t be better; that people aren’t being killed for doing nothing wrong, that rivers aren’t be poisoned with toxic mine waste, that entire communities aren’t being tossed aside like bags of garbage.

It almost makes you want to believe it. But then you get a chance to hear from people who stand on the frontlines–as if between life and death–who are striving to defend the earth out of pure necessity. Because anything less is a death sentence.

Thanks to the Mining Injustice Solidarity Network (MISN), the public at large had such a chance at the fourth annual Mining Injustice conference, which took place May 5-6, 2012, at the University of Toronto.

The two-day event brought together hundreds of community leaders, members of mining-impacted communities, students, activists, lawyers, educators, writers and others from around the globe to learn and talk about Canada’s mining industry.

The theme of this year’s conference was “Resistance”–and rightly so, given how many struggles are presently aimed at the careless, illegal, and/or cruel activities of Canadian mining companies. However, as someone who is well acquainted with the world-wide struggle, I can say that “Education” might have been the better term for it, since that was the most vital function of the conference.

Sufficed to say–with speakers like Francisco Ramírez Cuellar, Avi Chomsky, Evans Rubara, ELizabeth Babin, Bob Lovelace and Aniseto Lopez–if you didn’t know the reality of the mining industry going in, you certainly knew it coming out. That is, unless you were on a mission to make mining companies look good, in which case you just wasted your time.

All in all, there were a total of nine panel discussions during the first day of the conference, two keynote speeches, and, to bring the day to a close, four caucuses.

The most important–if not, the most disconcerting–speech at the conference was the second keynote by Francisco Ramirez Cuellar, lawyer, human rights activist and co-author of the book, “The Profits of Extermination: Big Mining in Colombia” with Avi Chomsky.

With a translator by his side, Francisco Ramirez Cuellar detailed the breadth of human rights and environmental abuses in Columbia by corporations like Greystar Resources, Glencore, Occidental Petroleum, British Petroleum and Drummond Coal.

In sharp contrast to his words, the Canadian government this week released a human rights report concerning implementation of the Canada-Colombia Free Trade Agreement. MiningWatch Canada describes the report as a “sick joke”, adding, “[it] might as well have been a comic strip of three monkeys: ‘see no evil, hear no evil, speak no evil.'”

Truth be told, alot of government’s efforts can be seen in that same light, whether it’s the CIDA scam to get NGOs working with mining companies; the effort to convert reserves across Canada into work farms for mining companies; the dismissal of Bill C-300 and the feeble website that came after it; and the list goes on.

Bringing the point home, Avi Chomsky, Professor of History and Coordinator of Latin American Studies at Salem State University in Massachusetts, delivered her on keynote on the role of “the Global North in mining activism.”

Chomsky could’ve easily went on for a couple hours, but given the time constraints of the conference, she kept to three main points: the importance of educating people, which she referred to as “our consciousness-raising project”; working directly with affected communities; and developing sound strategies. For the latter point, Chomsky explored participating in active boycotts, using international law and organizing strong PR campaigns to pressure companies into being responsible.

Bill C-323 closely resembles the somewhat mysterious Alien Tort Claims Act (ATCA). Enacted in 1789, ACTA gives non-American citizens the right to take civil action against anyone that violates the “law of nations” or a treaty of the United States. The Act has been used numerous times (sometimes successfully) against corporations like Chevron, Coca Cola, Rio Tinto, Talisman Energy, Unocal and, for the sheer change of pace, Yahoo. The Canadian counterpart, Bill C-323, would ensure that non-Canadian citizens can use Canada’s court system to challenge any corporation.

However, as great as that sounds, we’re still a ways off from pursuing the Bill. During his portion of the talk, Mark Rowlison pointed out that we must wait until 2015, after the Harper government hits the road. If we don’t wait, than our hope of using Canada’s judicial system will easily be crushed… processed, and thrown into some pristine river.

Following this panel, Clayon Thomas-Muller and Ron Plain talked about a subject that may have seemed a little misplaced for a ‘mining injustice’ conference, but it was absolutely on target. Their topic was tar sands extraction and pipelines.

First up, Clayon Thomas-Muller, a prominent IEN organizer, delivered a seasoned introduction to the Tar Sands that undoubtedly gave first-timers exactly what they needed to be in the know.

Ron Plain, however, took a very different approach, giving us an unvarnished look at life and death in Aamjiwnaang. To be sure, it was something the average Canadian probably wouldn’t want to hear.

Located in Ontario’s Chemical Valley, Aamjiwnaang is currently surrounded by more than 60 industrial polluters; some of which are actively processing tarsands bitumen.

After discussing the film, “The Beloved Community“, Ron Plain talked about the life expectancy rate in Aamjiwnaang, which is a full 25 years lower than the rest of Canada. It’s 55, he said. He pointed out that he himself just turned 50. So, one day soon, he lamented, it will be his turn.

As wrenching as it was to hear those words, that wasn’t the worst of it. “Everybody ignores Aamjiwnaang.” Meanwhile, various campaigns–like the one presently aimed at the tar sands–continue forward with ease, gathering massive amounts of media exposure, funding and support from activists and NGOs, even governments.

This sort of thing happens more often than most are willing to admit. Everyone else, meanwhile, is forced to contend with little more than the clothes on their backs.

Aamjiwnaang and the intractable situation they face, is a telling example of this; but the things is, it’s not intractable. As Plain pointed out, these companies just have to obey the precautionary principle, do good business, and let his community actively participate in the protection of their territory.

For the sake of mentioning it, another example of this cruel imbalance is the situation in Jadugoda, India. There you will find the world’s worst uranium mining disaster that no one wants to talk about. It’s comparable to the uranium horrors that our Dineh Brothers and Sisters face in the US; except that, instead of cancer being the biggest concern, it’s deformed children. In the case of Jadugoda, no one even wants to talk about why they don’t want to talk about it. It’s as if the place doesn’t even exist.

Big thanks to the Mining Injustice Solidarity Network for organizing the event, and for making my attendance possible. I am eternally grateful.