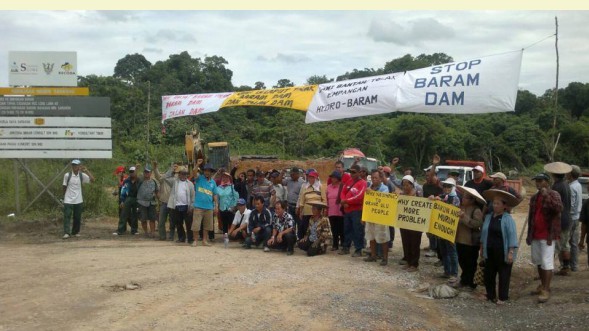 (LONG NAAH, SARAWAK / MALAYSIA) Native communities from Malaysia’s remote Baram district on the island of Borneo have warned state-owned electricity provider Sarawak Energy today to remove its construction machinery from their lands within three days. The machinery had been transported to the Baram region in order to prepare the construction of a 1200 MW dam that would displace up to 20’000 natives and flood a rainforest area of 400km2.

According to Sarawak’s Save Rivers network, a group of 30 workers had been found to conduct rock testing activities at the planned dam site at Long Naah. The workers were told to pack up and leave the native lands immediately. “The workers tried to negotiate but were told in no uncertain terms that there was no need for further negotiations as the communities rejected the dam project.”

Sarawak Energy was given a three-day ultimatum to remove its machinery from the native lands. A group of villagers set up a camp at the planned dam site to monitor the implementation of their demands.

Villagers upholding a second road blockade site near Long Lama today informed that their blockade was successful and no new construction equipment had been transported into the interior.

Further information on the dam protest would be released by Radio Free Sarawak (www.radiofreesarawak.org) on SW 15420 KHZ between 7 pm and 8.30 pm local time.

The Bruno Manser Fund calls on the Malaysian government and on Sarawak Energy to halt all works on the planned Baram dam and to create full transparency on the costs and contracts related to the construction of the Murum dam.