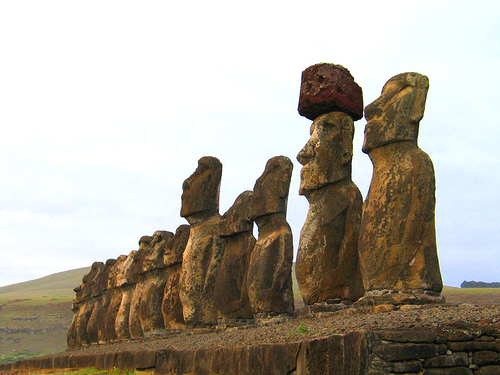 For the past two weeks, 500 Indigenous Peoples in Rapa Nui–a place more commonly known as Easter Island–have been occupying more than two dozen buildings over a land dispute that dates back to 1888.

In 1888, the remote island, known around the world for its monumental statues, called Moai, was annexed by a naval Officer, and turned into a province of the Chilean state.

From that point on, the Indigenous population was confined to the Hanga Roa settlement and the rest of the island was used as ranch land until 1953. 13 years later, in 1966, the Rapa Nui were given formal Chilean citizenship and the island was opened to the public for the first time.

In the years that followed, much of Easter Island was protected by the Rapa Nui National Park, a UNESCO World Heritage site; and, in 2007, a constitutional reform gave the island the status of a “special territory”, which granted the Indigenous People at least a degree of internal sovereignty.

Despite the gradual–or, at least, partial–restoration of their freedoms and rights, the Rapa Nui are deeply troubled over the “uncontrollable influx of tourists and settlers” on the island; and the fact that the Chilean government appears to be taking their ancestral lands to build more and more state office buildings.

The protest itself was sparked when the newly-elected Chilean President Sebastian Pinera appointed Pedro Edmunds Paoa to be the new Governor of Easter Island. According to the Guardian, Paoa is “suspected of plotting land deals” on the island.

After the protesters made their move, Paoa Impressively offered to resign from his position; and the government, also impressively, opted for a more reasoned approach. Instead of just simply attacking them, such as when the Mapuche attempt to reclaim some their own land,the government sent in a team of negotiators to begin addressing the Rapa Nui’s concerns.

Negotiations appeared to be going well. As reported by the Santiago Times. “The government on Friday [August 6]… issued a proposal to resolve the land issues. The proposal, signed by Interior Minister Rodrigo Hinzpeter, was given personally to Rapa Nui representatives by Celis. It proposes creating a committee to resolve the land issues, the protestors’ request for special status for the island, and their request for immigration regulation. The group would be made up of representatives from government ministries and the Rapa Nui community.”

But then, just one day after the government offered its proposal, Celis, who is the Valparaiso Regional Governor [Easter Island falls with the Valparaiso Region of Chile] callously sent a team of police officers to the Island, according to the Times-Herald Record, with authorization to use force against the peaceful, unarmed indigenous protesters.

So far, the police have acted strictly as observers; however there is a grave risk–and an even greater concern among the Rapa Nui–that the police will make a move if the protesters don’t leave the buildings by Monday, August 16. And in any case, the negotiations have been completely stalled.

With the deadline fast approaching, on Friday, August 13, the Rapa Nui parliament took things down an unexpected path. Representing almost half of the island’s indigenous population of 5,000, the Parliament issued a letter to the Pacific Island Forum and President Pinera, requesting the Rapa Nui’s right to secede from Chile.

The letter proposes that the island, situated on the southeastern point of the Polynesian triangle, would be better off if it was an official part of Oceania.

The government is attempting to downplay the request; nevertheless it is timely, given the fact that so many Rapa Nui may be brutally assaulted just two days from now, because they decided to occupy a handful of buildings on their ancestral land which is, as the same time, being inundated by settlers and tourists who went to get a glimpse into the history of the not-so-extinct Rapa Nui.