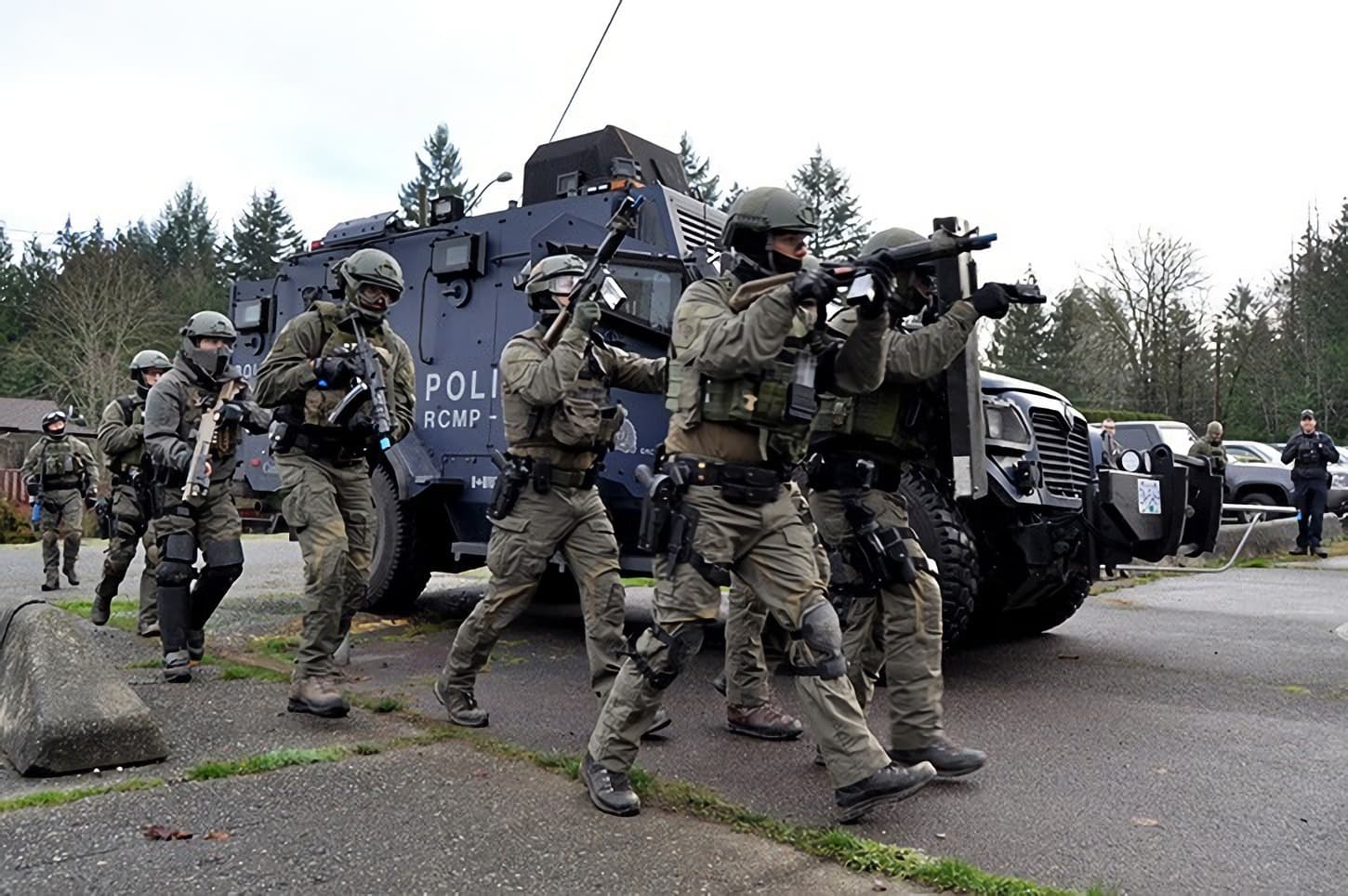 Wet'suwet'en calls on people of conscience to act in solidarity
The RCMP Emergency Response Team in training for action against First Nations (among others.)
Support our journalism. Become a Patron!

Two days ago, members of the RCMP’s Aboriginal Police Liaison met with the Wet’suwet’en Hereditary Chiefs and indicated that specially trained tactical forces will be deployed to forcibly remove Wet’suwet’en people from sovereign Wet’suwet’en territory.

Police refused to provide any details of their operation to the Dini’ze and Tsake’ze (hereditary chiefs) including the number of officers moving in, the method of forcible removal, or the timing of deployment.

By rejecting the requests for information by the Dini’ze and Tsake’ze the RCMP indicated that they intend to surprise and overwhelm the Wet’suwet’en people who are protecting their territories on the ground.

The RCMP’s ultimatum, to allow TransCanada access to un-ceded Wet’suwet’en territory or face police invasion, is an act of war. Despite the lip service given to “Truth and Reconciliation”, Canada is now attempting to do what it has always done – criminalize and use violence against indigenous people so that their unceded homelands can be exploited for profit.

The RCMP were advised that there are children, elders, and families visiting and present at the Gidimt’en Access Point, to which they did not respond.

Article 10 of the UN Declaration on the Rights of Indigenous Peoples clearly states “Indigenous peoples shall not be forcibly removed from their land or territories.” Any removal of Wet’suwet’en peoples by the RCMP, or any other authoritarian forces, will directly violate UNDRIP and the Trudeau government’s promise to implement UNDRIP.

We are now preparing for a protracted struggle. The hereditary chiefs of the Wet’suwet’en and the land defenders holding the front lines have no intention of allowing Wet’suwet’en sovereignty to be violated.

In plain language, the threat made by RCMP to invade Wet’suwet’en territories is a violation of human rights, a siege, and an extension of the genocide that Wet’suwet’en have survived since contact.

Canada knows that its own actions are illegal. The Wet’suwet’en fought for many years in the Delgamuukw-Gisday’wa court case to have their sovereignty recognized and affirmed by Canadian law.

In 1997, the Supreme Court of Canada ruled that the Wet’suwet’en people, as represented by their hereditary leaders, had not given up rights and title to 22,000 square kilometres of Northern British Columbia.

Knowing that further litigation would be prohibitively expensive to Indigenous plaintiffs (and that pipeline construction could be completed before any significant legal issues could be further resolved) TransCanada and the provincial and federal governments are openly violating this landmark ruling.

The creation of the Gidimt’en Checkpoint was announced in the Wet’suwet’en feast hall, with the support of all chiefs present. Under ‘Anuc niwh’it’en (Wet’suwet’en law) all five clans of the Wet’suwet’en have unanimously opposed all pipeline proposals.

The Wet’suwet’en have laid out a path toward the implementation of UNDRIP, and the Free, Prior, and Informed Consent requirement of international law. Canada has chosen to ignore this path toward reconciliation.

We call on all people of conscience to act in solidarity through an international day of action on Tuesday, January 8th, 2019.

Support the Wet’suwet’en by offering physical support to the camps, monetary or material donation, or by taking action where you stand.

We are conducting peaceful actions as sovereign peoples on our territories, and ask that all actions taken in solidarity are conducted peacefully and according to the traditional laws of other Indigenous Nations.

Forcible trespass onto Wet’suwet’en territories and the removal of Indigenous peoples from their lands must be stopped. Provincial and federal governments must be confronted.