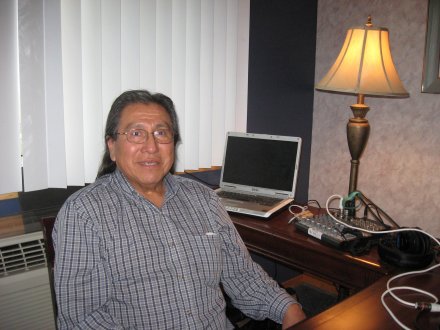 On Sunday, May 18, three indigenous People were arrested during a protest at Minnesota’s Sesquicentennial. Two of them are now in hospital after being beaten by the Police… A perfect example of racism in America…

Below, you will find a message from Chris Mato Nunpa (c/o Brenda Norrell) explaining what happened.

Tonight, around 8:15 PM, one of our attorneys (in the 1805 Treaty litigation), Barb Nimis, called and said that my younger daughter, Waziyata Win (Dr. Angela Cavender Wilson) had been arrested, again. Waziyata Win told the officers that she is a Dakota person, that Minnesota is Dakota land, and that she was only telling the truth. In addition, two other Anishinabe persons had been arrested, Steve Blake, and a woman called Flower.

These people were peacefully protesting, with signs, posters, banners, drums, and a gallows with 38 nooses hanging from it. Angela was arrested for Disorderly Conduct and let go. Steve Blake, with a hand drum, was singing a honor song for the 38 Dakota (hence, the 38 nooses) men who were hanged at Mankato, MN on December 26, 1862 in what was and is the largest mass execution in the history of the United States.

Four officers descended upon Steve and attacked him, who is a sickly man and had just gotten out of the hospital. The woman named Flower rushed to help and, apparently, hit an officer. Steve, now, is in the hospital and Flower is in Ramsey hospital.

It seems that these officers have instructions to harass, intimidate, and arrest Dakota People, with the apparent blessing of the Sesquicentennial Commission, the Minnesota Historical Society, and the other white supremacists and racists who do not want to hear the TRUTH about bounties, concentration camps, forced marches, forced removals/ethnic cleansing; warfare, massive land theft, broken treaties, genocide, etc.

I urge all of our friends, supporters, and allies to be there with us when we peacefully demonstrate, show our posters, carry our banners, and hand out our pamphlets and flyers to tell the TRUTH.

We need all of our allies – white, black, Mexican, other Indigenous Peoples – to stand there in support and solidarity, to be there with their cameras, the video cameras, to observe what happens to the Dakota People and their supporters when they tell the TRUTH.

We need white people to march with us. The cops will think twice before bashing our heads with their batons, before arresting us, before saying some of the racist and intimidating things they are fond of saying, if some white people are there with us.

The cops know that if it is an “Indian’s” word against the word of a white cop that there will be NO credence given to the Native person. However, if a white person sees what is happening, the cop will fear, or at least think twice before he does what he wants to do to Native Peoples. That is to hit them, beat them.

One cop, at Ft. Snelling, on Sat. 5/10 was heard to say that he was looking forward to do a little “thumping”, meaning beating the crap out of the Dakota People.

It seems that the arrests are increasing and the violence is intensifying against our Dakota People and their Anishinabe supporters and other allies. I see this trend continuing as we implement and execute our other planned and peaceful activities.

As Dakota People, who comprise about 5 10-thousandths of a percent of the total population of approximately 5-and-a-half million people in the state of Minnesota. We are struggling against overwhelming odds – “they” have the troops and cops, the horses (like at Ft. Snelling), the guns, the tanks, the tasers, and their law, especially their law which is their legal ideology which is used to enforce the exploitation of the Indigenous Peoples and their continued oppression.

However, many of us Dakota feel we have TRUTH and our spirituality to fight against these overwhelming odds, and we are optimistically believing that TRUTH will prevail.

I wish to thank all the allies and supporters out there who have supported our efforts and activities to highlight the Dakota voice, to get the Dakota perspective out there. We thank you for being at our EVENT ONE activities:

1B – the greeting of the wagon train at Ft. Snelling, on Sat. 5/10, at which seven people, including me, were arrested;

We are going to need all of you at the remaining four (4) activities that we have planned for the Sesquicentennial year of 2008 in our efforts to get the TRUTH out there, the TRUTH of what really happened in this state between the stealers/settlers and the Dakota People:

EVENT TWO – the exercising of our original and traditional fishing rights in one of the lakes in the ceded area, 155,000+ acres, of the Treaty of 1805;

EVENT THREE – the trial of Ramsey and Sibley for Genocide and Crimes Against Humanity;

EVENT FOUR – which we will mention later; and

EVENT FIVE – a legislative activity. Thank you for listening to me.

May 25th: post updated. The arrests actually happened on May 18, a day earlier than previously posted.