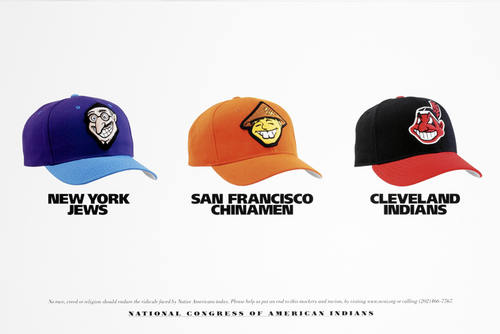 On February 7, 2013, the National Museum of the American Indian hosted a day-long symposium on Racist Stereotypes and Cultural Appropriation in American Sports.

This day-long symposium brought together an array of sports writers, scholars, authors, and representatives from sports organizations to explore the mythology and psychology of sports stereotypes and mascots, and examine the retirement of “Native American” sports references and collegiate efforts to revive them despite the NCAA’s policy against “hostile and abusive” nicknames and symbols.

The entire event, which you can find below in three segments, was streamed live from the Rasmuson Theater at the National Museum of the American Indian in Washington, DC.

In this first session Kevin Gover, Director of the Smithsonian National Museum of the American Indian, gives an introduction to the symposium. Following his talk, a panel explores the origins of mascots in American sports. The panelists for this session are:

In this second session of the symposium, panelist talk about specific American Indian mascots and the efforts to get sports teams to change them. The panelists for this session are:

Dr. Lee Hester, Associate Professor and Director of American Indian Studies and Director of the Meredith Indigenous Humanities Center, The University of Science and Arts of Oklahoma

Part 3: A Community Conversation About the Washington NFL Team Name

For this final session of the symposium, the panel engages the audience in a spirited community conversation about the name and logo of the Washington, D.C. professional football team. The panelists for this session are: