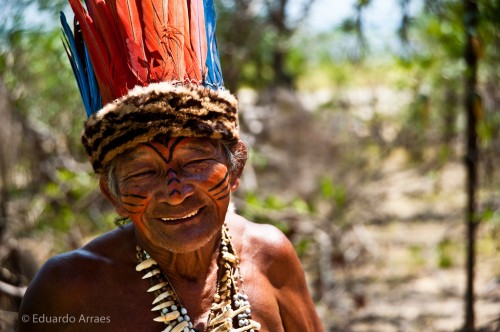 Q&A: ‘Traditional forest knowledge is not folklore, but a resource for change’

Policymakers need to value traditional knowledge for what it is. (Photo: "Eduardo Fonseca Arraes" on flickr)
Support our journalism. Become a Patron!

Researchers and policymakers have a lot to learn in designing and implementing climate change adaptation strategies from Indigenous Peoples and smallholder farmers in the Amazon, says Miguel Pinedo-Vásquez, scientist with the Center for International Forestry Research (CIFOR) and Director of International Programs at the Earth Institute Center for Environmental Sustainability at Columbia University.

“Traditional forest knowledge and practices are products of many years of local responses to hazards and opportunities produced by a variety of social, environment and economic changes,” continues Pinedo-Vásquez. “This knowledge doesn’t provide perfect solutions, but it does provide practical options.”

Pinedo-Vásquez is speaking on “Traditional forest knowledge: An Amazonian resource for adaptation to climate change, market shifts and policies” at the Third Latin American Congress of the International Union of Forest Research Organizations (IUFRO-LA), in San José, Costa Rica, 12–15 June.

He recently spoke to Forests News about how traditional forest knowledge and practices can be used to design local, regional and national adaptation and mitigation initiatives that can replace existing initiatives that often come at the expense of the very people who hold that knowledge.

Q: How has our understanding of the Amazon landscape changed in recent years?

A: Indigenous and other Amazonian people are constantly shaping and reshaping the Amazon forest. There is also increasing archaeological evidence about how early Amazonian peoples managed their environment. They managed not only forests, but also the nutrient-rich black soils, called terra preta or “black earth”, by burning and using different kinds of agricultural systems. Many present-day Amazonian agricultural and agroforestry systems, including the system for managing açai palms for the world-famous drink, combine agriculture and use of forest resources, and are modern-day adaptations of indigenous production systems.

Traditional forest knowledge is not just about how people use forests, but also how they perceive and regulate forests in their livelihoods and communities. Forests are frequently zoned by the community, with access and use regulated by local traditional norms. But in many areas the distinctions between fields and forests, crops and weeds, conservation and use is a fluid one, made on principles quite different from our own.

Q: How is that knowledge developed?

A: It comes from many sources. Some, as the word “traditional” suggests, are age-old and transmitted orally. But even when ancient, this knowledge also adapts and changes as new challenges are presented to the communities. Much of what we call “traditional knowledge” is based on long-term observation, questioning and experimentation that would make any scientist proud.

Much of the traditional knowledge in Amazonia has also been adapted from outside the region. For example, present-day use of medicinal plants has a lot to do with exchange of knowledge among different groups who settled Amazonia. A lot of medicinal plants that are used in indigenous or caboclo societies (that include people of many different backgrounds) were first used by people of the African diaspora.

Q: Why is it important for researchers and policy makers to pay attention to traditional forest knowledge?

A: Modern exploitation and production systems and technologies have often had limited success in Amazonia and have offered limited benefits for Amazonian communities. And traditional forest knowledge and practices, which are constantly updated and adapted to many different situations, offer a variety of ways to make adaptation initiatives work better for Amazonian environments and societies.

For instance traditional forest practices combines agriculture and forest management in ways that enhance forest regrowth while producing food. People know which species are valuable and which regenerate well in forest, field or fallow land and optimize this knowledge to achieve long-term gains and ensure sustainability of the production system.

Q: How can people use traditional knowledge to adapt to climate change?

A: Local and indigenous communities in Amazonia have developed multiple production systems that include forests and trees. Forests are managed for food, sometimes through processes like selective removal of some trees, or encouragement and transplanting of others, sometimes through clearing of small areas that are later allowed to regrow. There is an important lesson here for modern-day agriculture – which is one of the largest drivers of deforestation and subsequently a major contributor to climate change – all food production does not need to result in large-scale clear-cutting. We can produce food and preserve many of the ecosystem services of forests in the same place.

There have been changes in rainfall in Amazonia, and major climate events such as drought and floods have become more frequent and intense. Local or traditional knowledge offers models to build upon in dealing with these changes. One of the first things ribereños (people living along rivers) tell you is that they are shifting from agriculture to more agroforestry and forestry using species that are more resistant to flooding than are their annual crops. With this shift they can reduce the impact of these big events on their production systems and on their household’s well-being.

Helping farmers adapt to climate change is not just a matter of breeding new varieties of rice or corn, but also looking at how farmers can increase the products and benefits they get from the forest.

Q: How can governments begin to link traditional knowledge with policy?

A: Many government officials see traditional knowledge as folklore. But they need to value this knowledge as a resource for change. Traditional forest knowledge offers solutions to a variety of problems and consists of practices that can both enhance the livelihoods of local people and protect the environment.

Our development models and institutions need to get away from the idea that “one size fits all” when it come to adaptation, or that local solutions are inferior to other top-down approaches.

This article has been republished and adapted for Intercontinental Cry under a Creative Commons BY-NC-SA 3.0 license. It was originally published on 12 June at Forests News