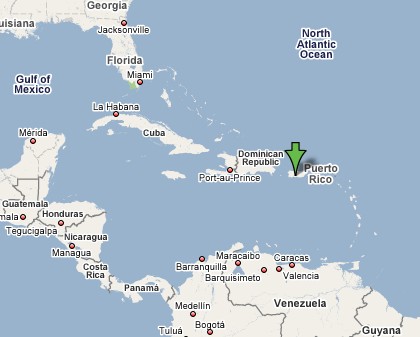 On April 11 Puerto Rico’s Department of Natural Resources (DNR) informed the General Council of Tainos Borincanos that they would NOT be allowed to clean the Bucana river in Jacanas.

As part of an effort to promote conservation and respect for the environment, the Council proposed the clean-up more than two months ago, to “mend the damage caused to the sacred site of Jacanas, Ponce, PR and to renew its integrity,” writes UCTP Taino News.

At that point they decided to contact the DNR, among other governmental agencies, to learn the proper procedures for the clean up. They sent faxes and letters, made phone calls, and even went to their offices in person — but their request was always ignored; that is, until just recently.

The DNR finally wrote back. But to the Tainos dismay, the letter was confusing and contained “no instructions on the procedures for carrying out such an activity; however they implied that the Taino Council needed to have the endorsement of federal agencies to clean our rivers and to protect Mother Earth.”

Then, on April 11 the Taino Council received a visit from DNR agents, who simply told the Council they would NOT be allow to clean up the river.

This situation is especially sad since garbage continues to accumulate at the river and contaminate such an important and sacred place. There are NO signs to indicate that garbage should NOT be thrown. All of these realities offend the dignity and disrespect the memory of our ancestors and in general the people of Puerto Rico.

As this is happening at this very moment in Puerto Rico, this unfortunate and possibly dangerous situation is evidence of the state of repression that the descendants of the Taino-Boricua People and the People of Puerto Rico are facing. These actions taken by the government of Puerto Rico and the Department of Natural Resources clearly constitute discrimination and a violation of law and the freedom to exercise our rights.

General Council of Tainos Borincanos is requesting support from all Puerto Rican/Boricua environmental, cultural and indigenous communities as well as international indigenous rights organizations in order to exercise our rights as a people as well protect our patrimonial legacy.