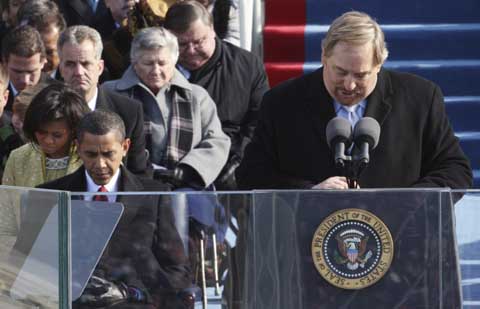 Prototype of Hate: Pandering has Consequences

While Far-Right Christians are a well-known contingent of the Anti-Indian Movement within the US, their role in U.S. foreign policy — something that affects indigenous peoples worldwide — is less known. While it is no secret that conservative evangelical missionaries actively promote popular hostility toward non-Christian indigenous beliefs, how they affect foreign leaders commanding U.S. proxy armies in countries like Uganda is not common knowledge. As indigenous peoples throughout Africa are increasingly threatened with ethnic cleansing and genocide in order to make the continent’s vast wealth accessible to foreign corporations, US missionaries play an under-reported but key role.

In December 2008, when Obama selected the homophobic pastor Rick Warren to give the invocation at his presidential inauguration, progressive Christians were rightly concerned that Obama’s pandering to Far-Right Christian bigotry might have consequences. Indeed, as Bruce Wilson noted in his January 2009 article on Warren’s fanatical mission in Uganda, radical devotion to violent Christian revolution resulted in genocidal behavior by the Ugandan military. As Chris Rodda observed, the pressure to conform to radical Christian tenets promoted by Warren — thanks to Obama’s lack of judgment — extended to members of the U.S. military.

As Rachel Tabachnik remarked in October 2010, missionaries of hate who advocate murdering gays have adopted the Ugandan model — designed by Rick Warren — as a prototype to be replicated in countries around the globe. While merging church and state is always dangerous, merging state powers with churches like Warren’s leads to crimes against humanity.

In May 2012, Kapya Kaoma examined the U.S. Christian Right and the attack on gays in Africa, with a special focus on the anti-gay Rick Warren’s role in exporting homophobia. As Frederick Clarkson reported yesterday, the acclaimed documentary God Loves Uganda — which depicts the role of American conservative evangelicals in generating vicious anti-gay campaigns there — premiers in New York on June 25.