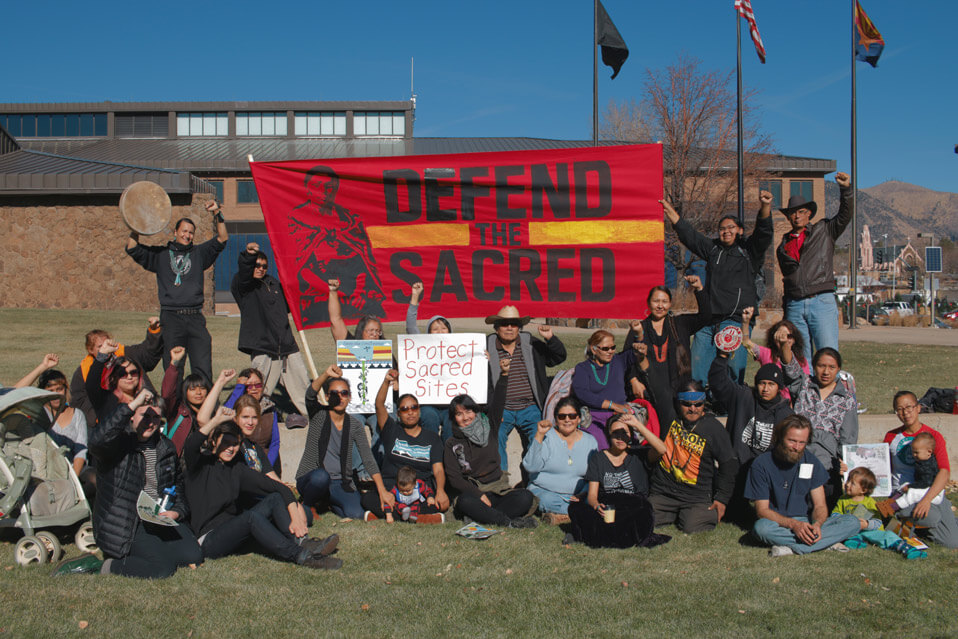 FLAGSTAFF, AZ — On Friday, November 28, 2014, more than 50 people rallied and marched as Arizona Snowbowl ski area opened with snow made from 100% treated sewage on the sacred San Francisco Peaks. With no natural snowfall, Snowbowl had a mere 3 out of 40 ski runs open.

People came from Prescott and Kayenta, AZ and as far away as Shiprock, NM to support residents of Flagstaff who were addressing concerns with Snowbowl’s opening, which the multimillionaire owner promotes as “White Friday.”

“It saddens me deeply that respect alone did not stop reclaimed wastewater from being sprayed on the peaks.” said Rudy Preston, Flagstaff resident, “And to add injury to insult, I watched them spray the wastewater snow all over picnic tables at the lodge eating area which a week later had melted down to this strange gray powder coating everything. On opening day I witnessed at least 50 people eating lunch in this stuff. They don’t even have respect for their own customers.” 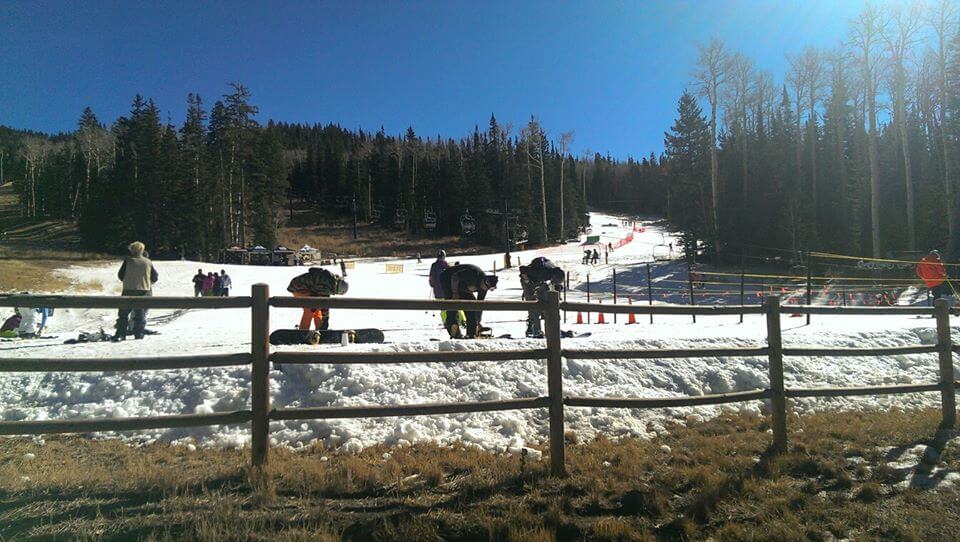 “I am disgusted by recent local news coverage for Arizona Snowbowl which are nothing more than advertisements for the ski area that go so far as to falsify their reports with images and video of the ski area with a lot more snow on it. If they will blatantly lie that bad for a wastewater soaked, podunk ski area, can I believe even one word of what they say, ever?” stated Rudy.

In press releases and media interviews, Snowbowl is also misleading the public and placing people, especially children, at risk by intentionally omitting that they use 100% wastewater for snowmaking.

“This is beyond environmental racism, this is an ongoing act of cultural genocide,” stated Klee Benally, volunteer with Protect the Peaks, “The US Forest Service, Snowbowl, and City of Flagstaff have made it clear that a couple of small ski runs covered with a foot of treated sewage and marginal economic profit are more important than the cultures of 13 Indigenous Nations, public health, and the ecological integrity of the holy San Francisco Peaks.” 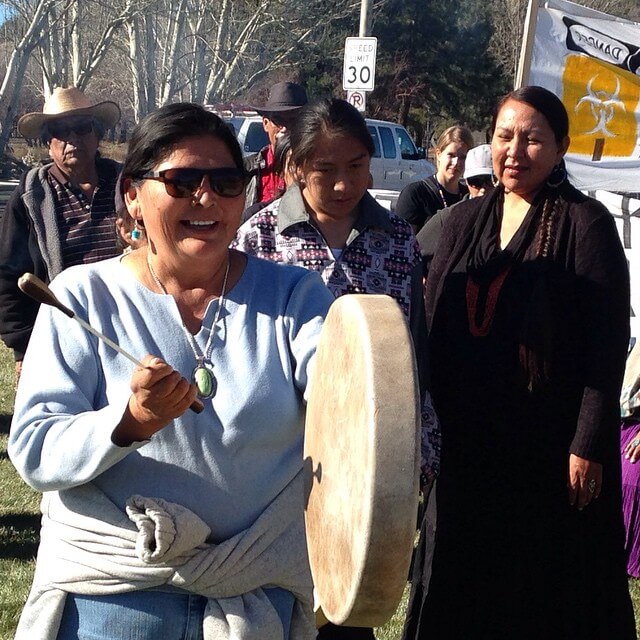 Louise Benally, Diné resister from Big Mountain, Sovereign Diné Nation, spoke about paramilitary style assaults and livestock theft committed by the Bureau of Indian Affairs and tribal rangers against residents of Black Mesa. Louise offered a prayer song before the group marched through downtown Flagstaff. Diné youth Toby & Jody Manuelito joined Supai Waters, from the Havasupai Nation, to lead the march which stopped for a round dance in Heritage Square. The march also paused in front of businesses known to support Snowbowl such as Oncore. Protesters chanted, “Boycott Snowbowl,” “You say recreation, we say desecration!” & “When Mother Earth is under attack what do we do? Fight Back!” 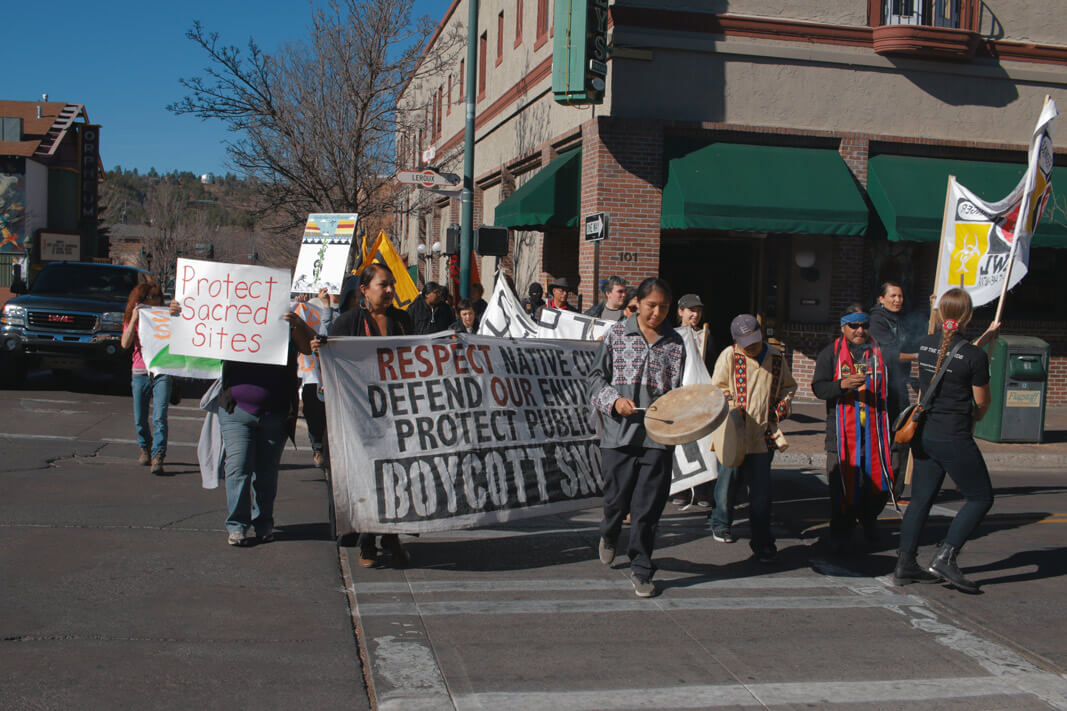 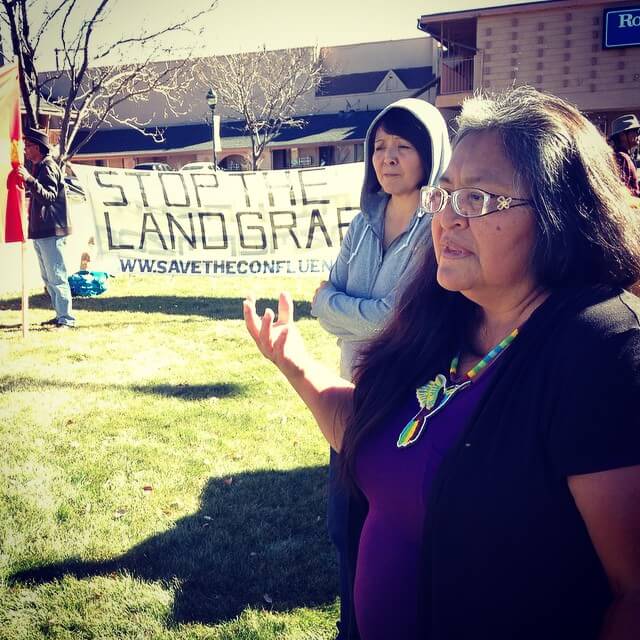 Renae Yellowhorse & Sarana Riggs from Save the Confluence

Renae Yellow Horse and Sarana Riggs from Save the Confluence spoke about attempted desecration of the Grand Canyon Confluence by a proposed development called the “Escalade.”
“We all are the defenders of the lands, above and below, all around us.” stated Renae Yellowhorse, spokesperson for Save

the Confluence Familes and Supporters, “The mountains, the rivers, the sacred spaces and places. Our sacred mountain, Dooko’osliid and our sacred spaces, the Confluence of the Little Colorado and Colorado Rivers — they are all under threats of development, the Snowbowl as well as the Grand Canyon Escalade. This is wrong and we must all stand up and speak up. Defend the Sacred!” said Renae.

“We are Arizona Students Against Snowbowl (ASAS), a growing state wide coalition of college students calling for campus wide boycotts of Snowbowl in our institutions.” stated Iliana Correa-Hernandez student at Prescott College, “We came to protest against Snowbowl’s use of millions of gallons of sewage waste water to make fake snow on the San Francisco Peaks. This is a desecration of sacred land and an act of cultural genocide. We stand with the 13 Indigenous Nations who are protecting the sacred and defending life.”

“I was surprised that some people at Snowbowl did not know that reclaimed waste water is used to make the snow.” said Robyn Jackson, Diné community advocate and activist from Wheatfields, AZ Navajo reservation. “While two young Diné women held a banner saying ‘Boycott Snowbowl,’ some people made it known they supported Snowbowl, but others came by and expressed appreciation and support of our presence. We witnessed children playing in the snow as well as a group of people eating on top of it. It did not seem that people were fully aware of the health hazards they were exposing themselves to.”

“The connection we as Diné have with our abalone shell mountain, and the importance it has in our existence. The snow is unhealthy for the entire ecosystem of our sacred mountain.” said T. Tracy, Diné who came to the protest from Tséhoottsooí, “I saw children playing in snow made from treated sewage. Hands and faces open to the waste product. It wasn’t very busy but I can imagine plenty more people, ignorant to what they’re rolling in, going to the mountain without a clue as to the harm they’re exposing themselves and the mountain’s ecosystem too.” said T. Tracy.

City officials acknowledge that reclaimed wastewater may contain antibiotic resistant bacteria and pharmaceuticals, but have no timeline for testing and mitigating these issues. It is illegal to ingest reclaimed wastewater through the eyes, mouth, ears or skin due to its fecal coliform and chemical content. In spite of this, state agencies are turning a blind eye to these facts when considering matters with Snowbowl – thus the City and State agencies are putting thousands of skiers and families at risk. 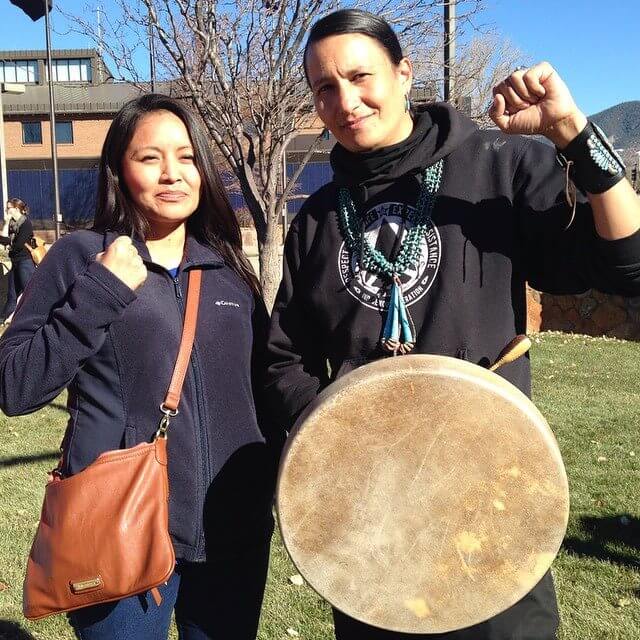 “The cultural genocide of Native peoples identities, sacred places, and religious freedom are constantly under attack.” said Amanda Blackhorse, plaintiff in a suit against the racist Washington NFL team, “Many people don’t realize corporations feed off of one another with regards to cultural appropriation, whether it’s Native mascots in professional sports or the desecration of Dooko’osliid (San Francisco Peaks), a temple for Native people. Native people are constantly at the mercy of corporate America as we watch our culture, religion, and identities be used for profit or destroyed for the benefit of leisure.” said Amanda.

The United Nation’s Committee on the Elimination of Racial Discrimination (CERD) issued a response to complaints filed by Indigenous organizations and the Navajo Nation’s Human Rights Commission in 2011 stating, “The Committee requests information on concrete measures taken to ensure that the sacred character of this site for indigenous peoples is respected, including the possibility of suspending the permit granted to the Arizona Snowbowl in order to further consult with indigenous peoples and take into account their concerns and religious traditions.” CERD is charged with monitoring compliance with the International Convention on the Elimination of all forms of Racial Discrimination.

Snowbowl is a single for-profit private business operating under a Special Use Permit (SUP) on Forest Service public lands. James Coleman, owner of several ski resorts throughout the Southwest, recently revealed he had made an offer to purchase the ski facilities. Coleman has made new threats of ski area expansion. Since Snowbowl is on public lands, the US Forest Service will have to approve a new SUP if the sale goes through. Indigenous Nations have the opportunity and right to request consultation through that process.