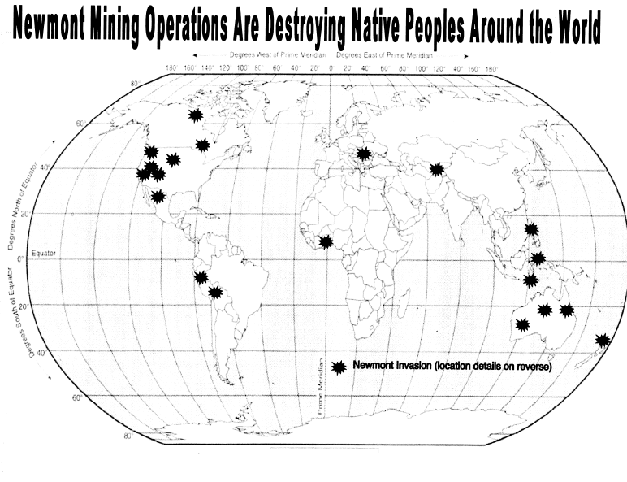 Protest against Newmont Gold – an Invader of Indigenous Land

At the end of August there’s going to be a protest at the University of Denver’s Korbel Dinner, which is an annual fundraiser for the Graduate School of International Studies (GSIS).

This year’s keynote Speaker is Madeline Albright–but the main reason for this protest is because the GSIS intends to honour Wayne Murdy, the CEO of the world’s biggest gold mining company, for his company’s “progressive” work around the world.

Colorado AIM, who teamed up with the Stop Newmont Coalition two years ago, sent out the following information about the protest and why you should get involved.

BRING YOUR COURAGE, YOUR VOICE, YOUR BULLHORNS, and YOUR MOST CREATIVE PROTEST STRATEGIES

On Thursday, August 30, 2007, the University of Denver Graduate School of International Studies (GSIS) will honor Wayne Murdy, CEO of Newmont Mining Corporation for the company’s “progressive” work around the world. That work happens on every continent, and involves the invasion of indigenous peoples’ territories from the Western Shoshone in Nevada to the Quechua/Aymara in Peru and Bolivia to the Aboriginal peoples of Australia.

Two years ago, Colorado AIM joined with the Stop Newmont Coalition to force Newmont to be accountable to the communities that it is destroying through its mining. Brothers and sisters from Peru, Ghana and Western Shoshone joined us at the annual shareholder’s meeting to expose Newmont’s practices. Newmont was so frightened by our mobilization that it changed locations for the meeting three times, and ended up in an armed location with sharpshooters on the roof of the building where the meeting was held. This year, Newmont was so frightened of a repeat performance in Denver that it held its annual meeting in Delaware.

Newmont has been put on notice that as long as it is invading and poisoning indigenous peoples’ territories, and steal Native peoples’ natural resources, that there will be no business as usual. It will be exposed for its actions at every opportunity. Such an opportunity is Thursday, August 30, in downtown Denver.

Colorado AIM has joined the call for a mass protest action at the University of Denver’s annual Korbel Dinner, the largest fundraiser for the Graduate School of International Affairs. The keynote speaker will be Madeleine Albright, the former Secretary of State under Bill Clinton. On the estimated death of 500,000 children in Iraq because of U.S. sanctions there, Albright had the following exchange on CBS’ “60 Minutes.”

Lesley Stahl on U.S. sanctions against Iraq: We have heard that a half million children have died. I mean, that’s more children than died in Hiroshima. And, you know, is the price worth it? Secretary of State Madeleine Albright: I think this is a very hard choice, but the price–we think the price is worth it. –60 Minutes (5/12/96)

This statement alone is worth picketing the dinner for, but, in addition to Albright (after whose father the dinner is named), DU will be giving an award to Wayne Murdy of Newmont. Attached to this message are two letters — one from activists in communities being destroyed by Newmont, and one from OXFAM International, the renowned international human rights group. Both give reasons to protest this event. This is the link to the OXFAM letter.

Indigenous leaders are in imminent threat. Father Marco Arana, whom we in Colorado AIM honored two years ago, is under death threats right now for opposing Newmont.

Our Native sisters and brothers are asking for us to stand for them against Newmont here in Denver, Newmont’s international headquarters. Can you give one or two hours of your time to walk with a sign, to raise your voice, and to let Newmont and DU know our outrage? We march against Columbus and Columbus Day, but Newmont is the heir of Columbus, it is the living expression today of the Columbus legacy — invasion, greed and destruction. Join us in the streets, for all of our Native relations. Please let Glenn know if you are arrestable at
this action, and if you are willing to risk arrest at this protest. Thanks.