Indigenous people have had to fight for recognition of every right we have. And we always will.
Support our journalism. Become a Patron!

IN A WEEK WHEN Indigenous people announced that reconciliation is postponed, if not cancelled, the Prime Minister sprinkled us with the sunshine of his forthcoming legal framework on Indigenous rights. Mr. Trudeau used bold words like engagement and implementation, even uttering the C-word, and claimed that his government would complete the unfinished business started by Trudeau the Senior, with the repatriation of the Constitution.

We cannot bring back the things that we have lost. What we can – and must – do is commit ourselves to being better, and doing better. Today, we announce a new framework to do just that: https://t.co/s3urbdwCQO pic.twitter.com/WN5AsaXxlE

A little background might help. Never forget that the federal government didn’t give Indigenous people Section 35 of the Constitution. Indigenous people—natives, as we were then known—weren’t even invited to the conversation, at first. Pierre “The White Paper” Trudeau had no appetite for discussing native rights, which in his view were simply the rights of all Canadians, and made no mention of a Section 35 in his 1980 proposal. Indigenous people made a stink, and you know the adage about squeaky wheels and grease. Eventually the Indian politicians got a seat at the table, and quite a few native people protested that, too, not wanting to be a part of whatever dirty work they suspected the feds were up to.

I’m not an expert on what happened next, but I’ve talked to every AFN National Chief involved in the repatriation talks and beyond. The Assembly of First Nations led the charge for recognition of inherent Indigenous rights, and met the resistance of Team Trudeau and the provinces, who whittled a much more robust series of proposed clauses into the now-familiar language of Section 35:

The resource-extraction provinces, particularly Alberta, took the position that Section 35 (existing aboriginal and treaty rights) was an empty box, to be filled in the future at the discretion of the courts. The premiers had seen similar work in Australia, where existing Aboriginal rights were interpreted to mean rights that come into existence, from this moment forward. But of course that’s not how it’s gone in Canada. Indigenous people have taken their Section 35 rights to court, over and over again, and fought like hell to get our rights into the box. And in many instances, certainly more than Canada would have preferred, we’ve won. 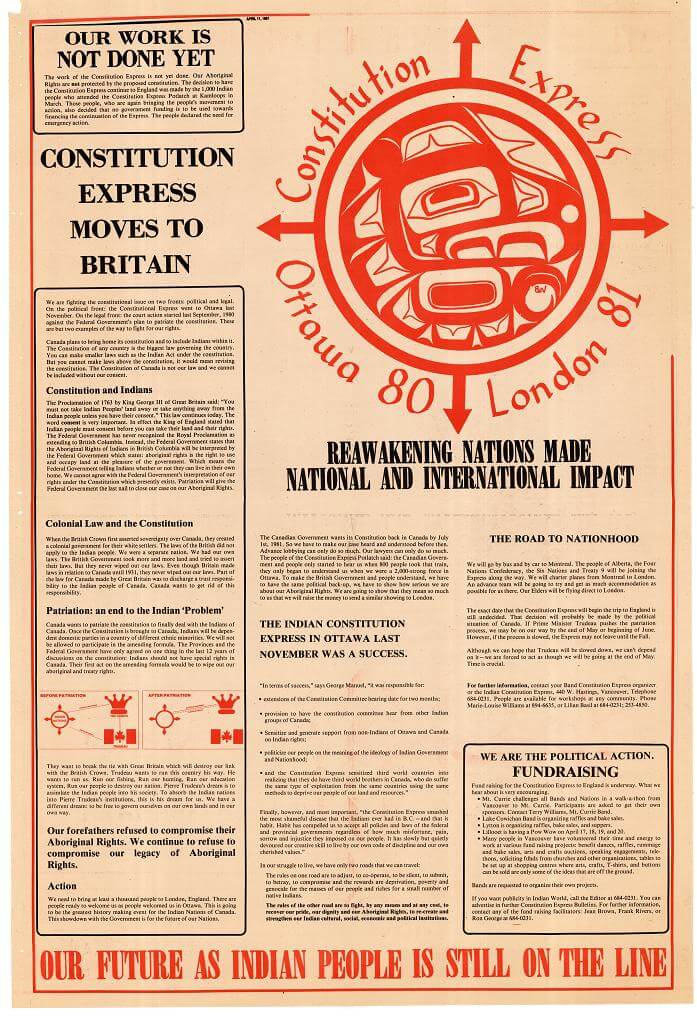 The Section 35 fight for Indigenous rights, recognized and affirmed by the Constitution of Canada, has been a restless work from 1982 to the present. The view that we’ve made progress is not universal, with people like Mary-Ellen Turpel and Art Manuel and Russ Diabo arguing that the post-Section-35 world is a colonial world, just like it was before. Instead of Indigenous sovereignty over our lands and resources, and a nation-to-nation relationship with Canada, colonial interpretations of Section 35 give our communities municipal powers and brown bureaucrats. We can choose the day Rez garbage will be picked up, and our signs say Tésta’n instead of STOP. We get to say Yes to pipelines, and if we’re lucky receive a share of the take, but we don’t get to say No, because we are a minority sub-sect of Indigenous-Canadians.

What we all agree on as Indigenous people is that we’ve had to fight for everything we’ve ever had. Someone once said that government doesn’t give you your freedom, you have it already—if you exercise it. That’s true of all people, but it’s doubly and triply true for Indigenous people, who would have vanished entirely, like a narrow river into the ocean of Canada, if things had gone as originally planned. There isn’t an Indigenous right on Earth that we’ve been given by a colonial government, and there never will be. And Trudeau’s rights framework changes nothing.

This article was originally published at waynekspear.com. It has been re-published at IC with permission from the author.