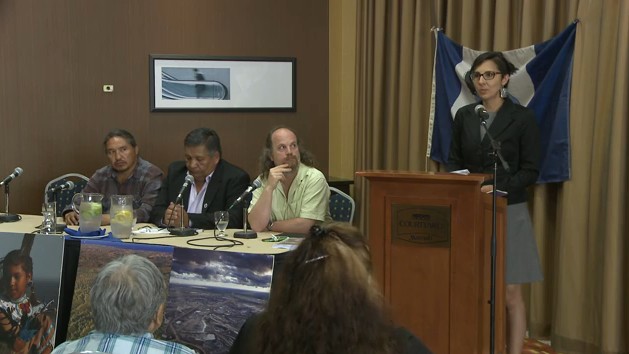 Q & A with ACFN and MCFN leadership, University of Manitoba scientists and prominent health officials regarding key findings of the report Environmental and Human Health Implications of the Athabasca Oil Sands.

The Athabasca Chipewyan First Nation (ACFN) and the Mikisew Cree First Nation (MCFN) leadership along with University of Manitoba scientists, and prominent leaders from the health community are gathering in Edmonton to release the long awaited report Environmental and Human Health Implications of the Athabasca Oil Sands. This report characterizes the impacts of upstream industrial activities on wildlife, environmental and especially human health. ACFN and MCFN worked closely with the University of Manitoba scientists to evaluate contaminant levels, potential exposure of community members, and to explore the implications for human health and wellbeing through a cross-cultural blend of western science and traditional ecological knowledge.

The findings of this report bring alarming new data that document elevated levels of the environmental contaminants arsenic, cadmium, mercury and selenium, as well as PAHs (some carcinogenic) in the foods traditionally harvested by the First Nations in the region. The report also looked at the human health of individuals in the community and found staggering results that concluded that of the 94 participants, 20 (21.3%) had displayed 23 cases of cancer. Importantly, it reported that cancer occurrence is significantly and positively associated with participant employment in the Oil Sands as well as the consumption of traditional foods and locally caught fish. These health results have dramatic consequences for industry, governments, and downstream communities alike.

Q & A with ACFN and MCFN leadership, University of Manitoba scientists and prominent health officials regarding key findings of the report Environmental and Human Health Implications of the Athabasca Oil Sands.

Susanne McCrea / One River Many Relations Communications (204) 297-0321, or borealaction@gmail.com