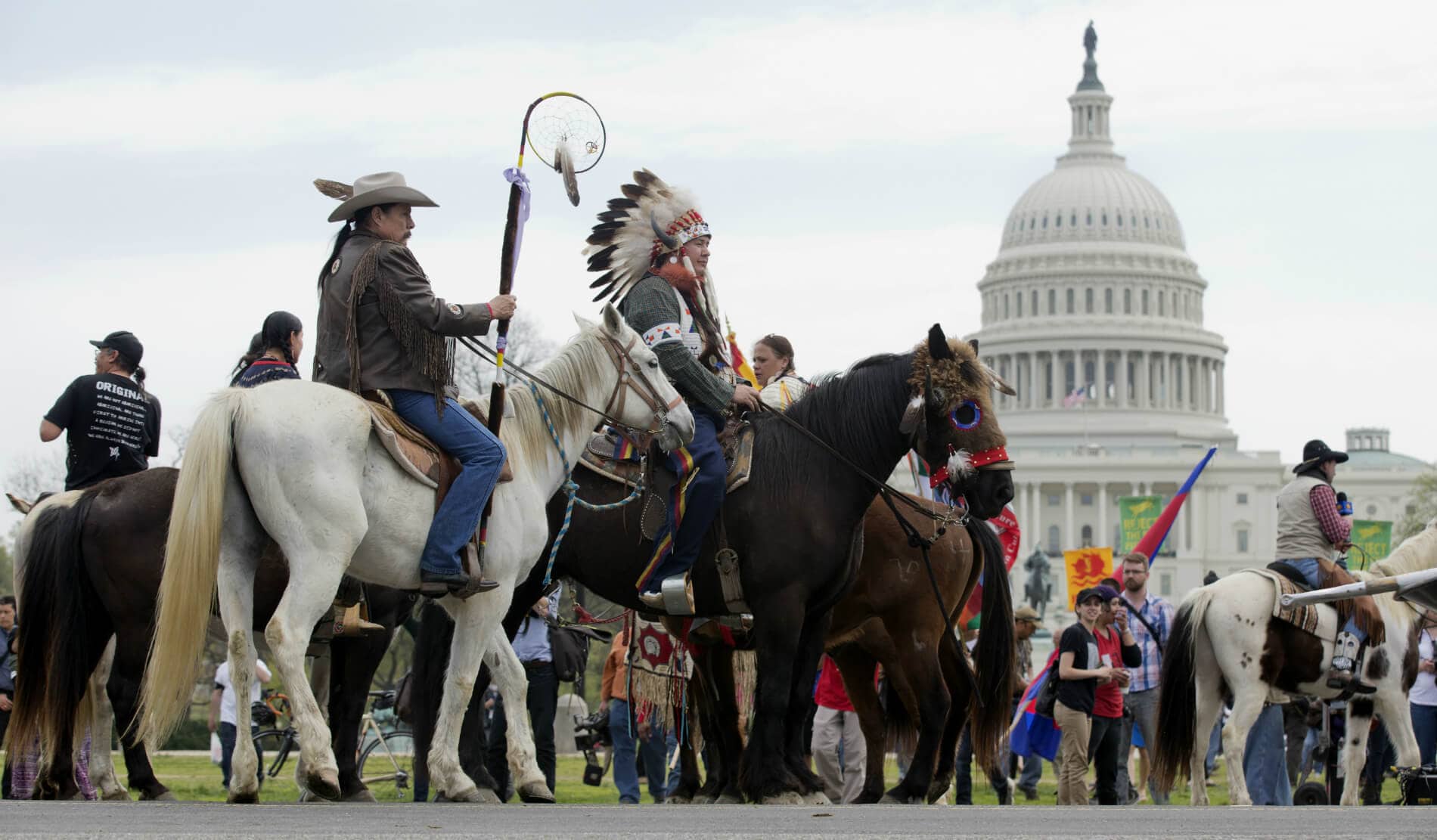 Populist alliances of ‘cowboys and Indians’ are protecting rural lands

A diverse coalition is resisting pipelines and other big projects. AP Photo/Manuel Balce Ceneta
Support our journalism. Become a Patron!

The sea of red on recent election maps make it look like rural areas are uniformly populated by Republicans. And conventional wisdom suggests that those Americans are largely conservative populists who question many government regulations and do not welcome cultural diversity.

But the growing influence of Native American nations in some rural areas is starting to change that picture. Empowered by their treaty rights, they are beginning to shift the values of their white neighbors toward a populism that cuts across racial and cultural lines to challenge large corporations.

I’m a geographer who studies the relationships between tribes and rural white farmers, ranchers and fishers. In my book “Unlikely Alliances: Native Nations and White Communities Join to Defend Rural Lands,” I relate what I learned through dozens of interviews with Native Americans and their non-Native allies who described how the tribes are fusing the power of their sovereignty with the populist grievances of the tribes’ historic enemies.

By teaming up to defend the place they all call home, they are protecting their lands and waters for all. 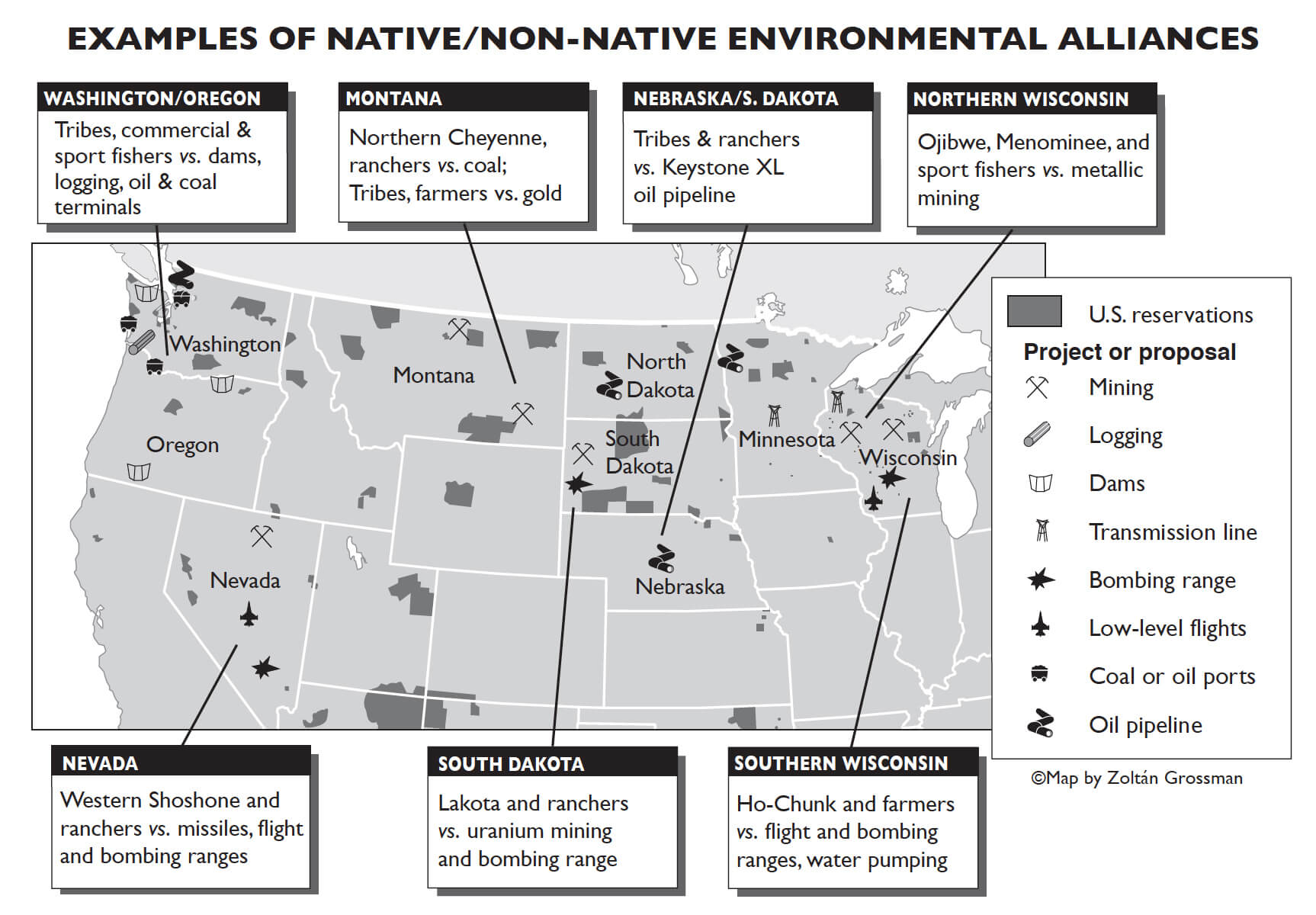 Ever since Native Americans began to reassert their treaty rights to harvest fish, water and other natural resources, starting in the 1960s in the Pacific Northwest, a far-right populist backlash from some rural whites has sparked racial conflicts over those resources.

But starting in the late 1970s, some Native nations across the country joined with their rural white neighbors — including people who had been their adversaries in treaty conflicts — to block threats to rural lands and waters, such as mining, pipeline, dam, nuclear waste and military projects.

The alliances joined tribes and rural, mostly white, Americans to confront common enemies. They helped whites in these areas learn more about indigenous cultural traditions, legal powers and ecological values. Tribal members also learned that their neighbors valued the local environment, and wanted to protect it from outside corporations.

In South Dakota and Nebraska, for example, a group called the Cowboy Indian Alliance has, since 2013, brought together Lakota and other tribes with white ranchers and farmers to stop the Keystone XL oil pipeline. The alliance drew from earlier coalitions that stopped uranium and coal projects and a bombing range in the Black Hills of South Dakota.

Farmers and ranchers in these two deep-red states opposed the use of eminent domain to seize their private property for the pipeline. That land had originally belonged to the tribes.

As they worked together against the pipeline, the tribes influenced some white neighbors to protect sacred burial sites on their property.

“We come from two cultures that clashed over land,” Alliance spokeswoman Faith Spotted Eagle observed. “This is a healing for the generations.” 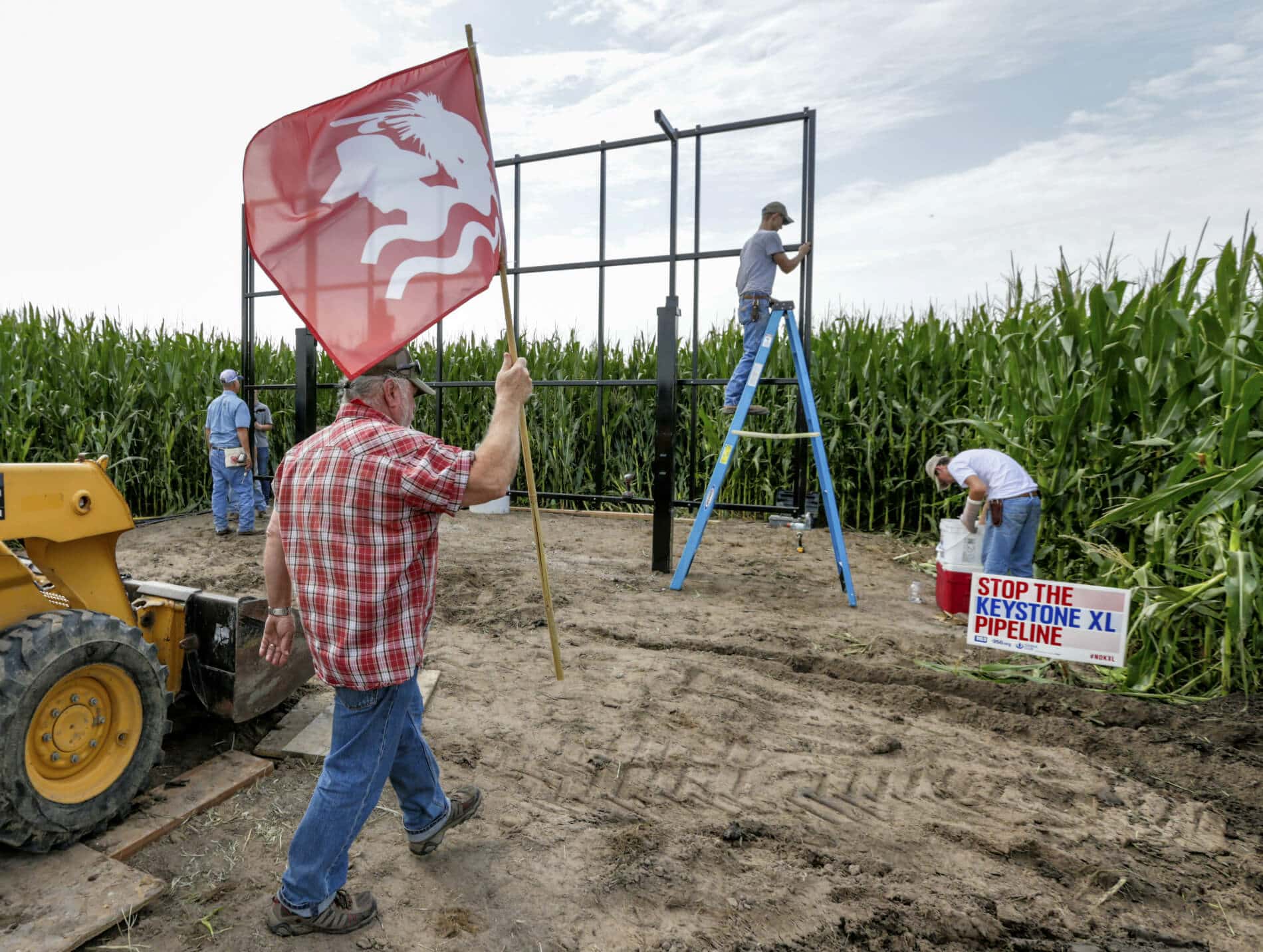 In Washington and Oregon, Native nations are using their treaty rights to stop plans to build coal and oil export terminals. The same largely white fishing groups in that region that used to aggressively protest treaty rights now back the tribes in protecting fisheries from oil and coal shipping, and in restoring fish habitat damaged by development.

The Lummi Nation, near Bellingham, Washington, led the fight that staved off a coal terminal in a sacred burial ground. The Quinault Nation on the Pacific coast led an alliance that helped kill plans to build oil export infrastructure that would have threatened salmon and shellfish.

The mostly white working-class residents of former logging towns in the area, who have strongly opposed timber industry regulations, have worked more easily with local tribes than with urban environmental groups to protect their local economy from fossil fuels.

“The relationships we have with our neighbors arose out of a relationship of much division, strife, and conflict,” Quinault President Fawn Sharp told me. Through that, she added, “they’ve come to know who we are.” 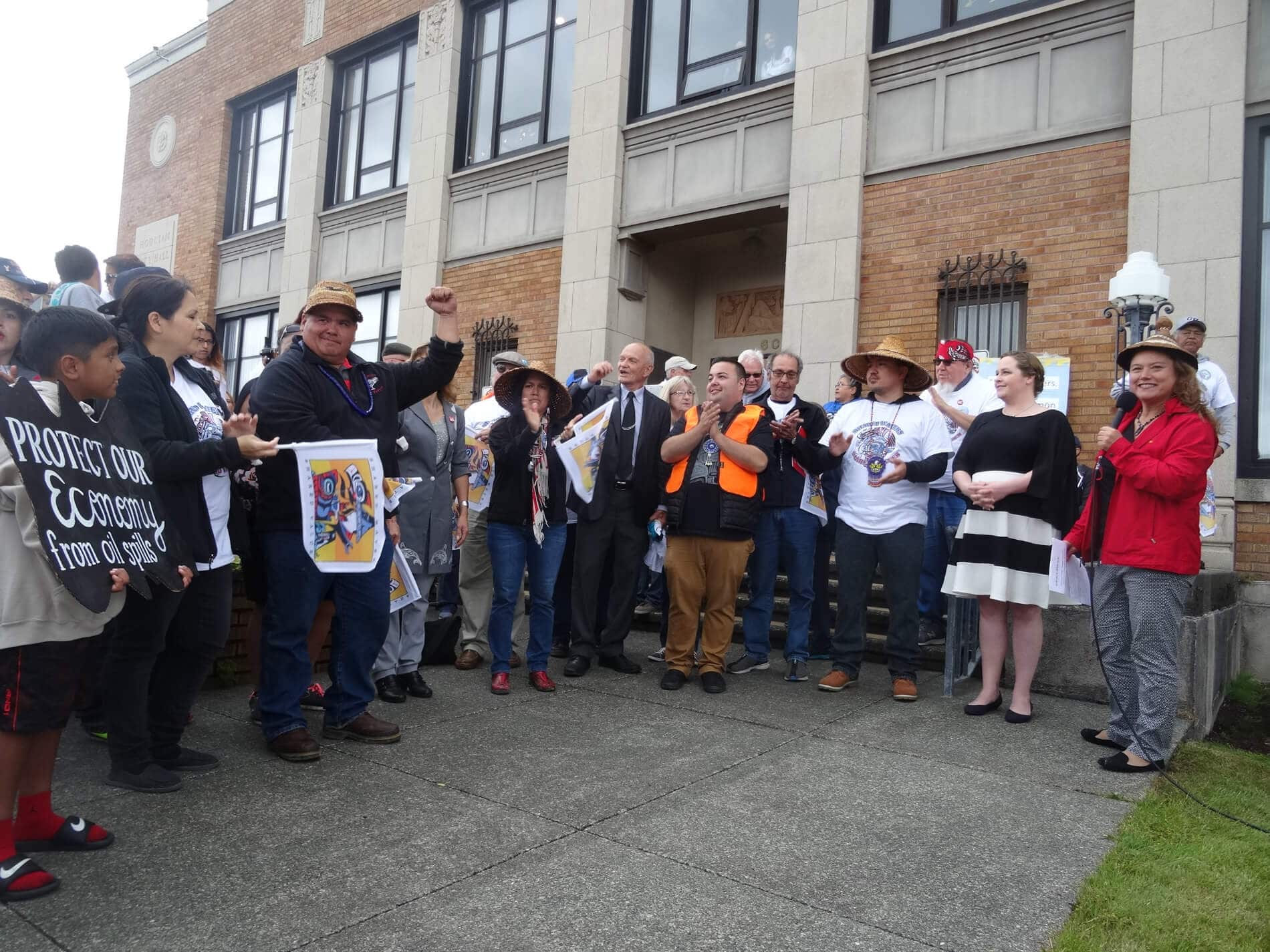 In Wisconsin and Michigan, Ojibwe and Menominee tribes are fighting to prevent new mining projects, joined by their rural white neighbors, because those projects threaten fishing streams, wild rice beds and burial sites.

As recently as the early 1990s, many white anglers in northern Wisconsin were violently protesting Ojibwe treaty rights to spear fish, harassing and physically attacking Native Americans after anti-treaty groups led to them to believe that tribal fishing threatened the local tourism economy.

But the tribes presented their treaties as a legal obstacle to the mines that both groups viewed as a threat to the fishery.

The Midwest Treaty Network convinced many anglers to cooperate with tribes and environmental groups to join in the effort to stymie plans to build a copper and zinc mine near Crandon, Wisconsin. They won a protracted fight in 2003. The anglers had realized that if they kept arguing with the tribes over fishing rights, there might not be any fish left.

More recently, the Bad River Tribe on the Wisconsin shore of Lake Superior led an alliance that stopped the Penokees iron mine in 2015, upstream from wild rice beds culturally valuable to the tribe.

And the Menominee Nation and its allies are trying to block the Back Forty zinc and gold mine in Michigan’s Upper Peninsula. 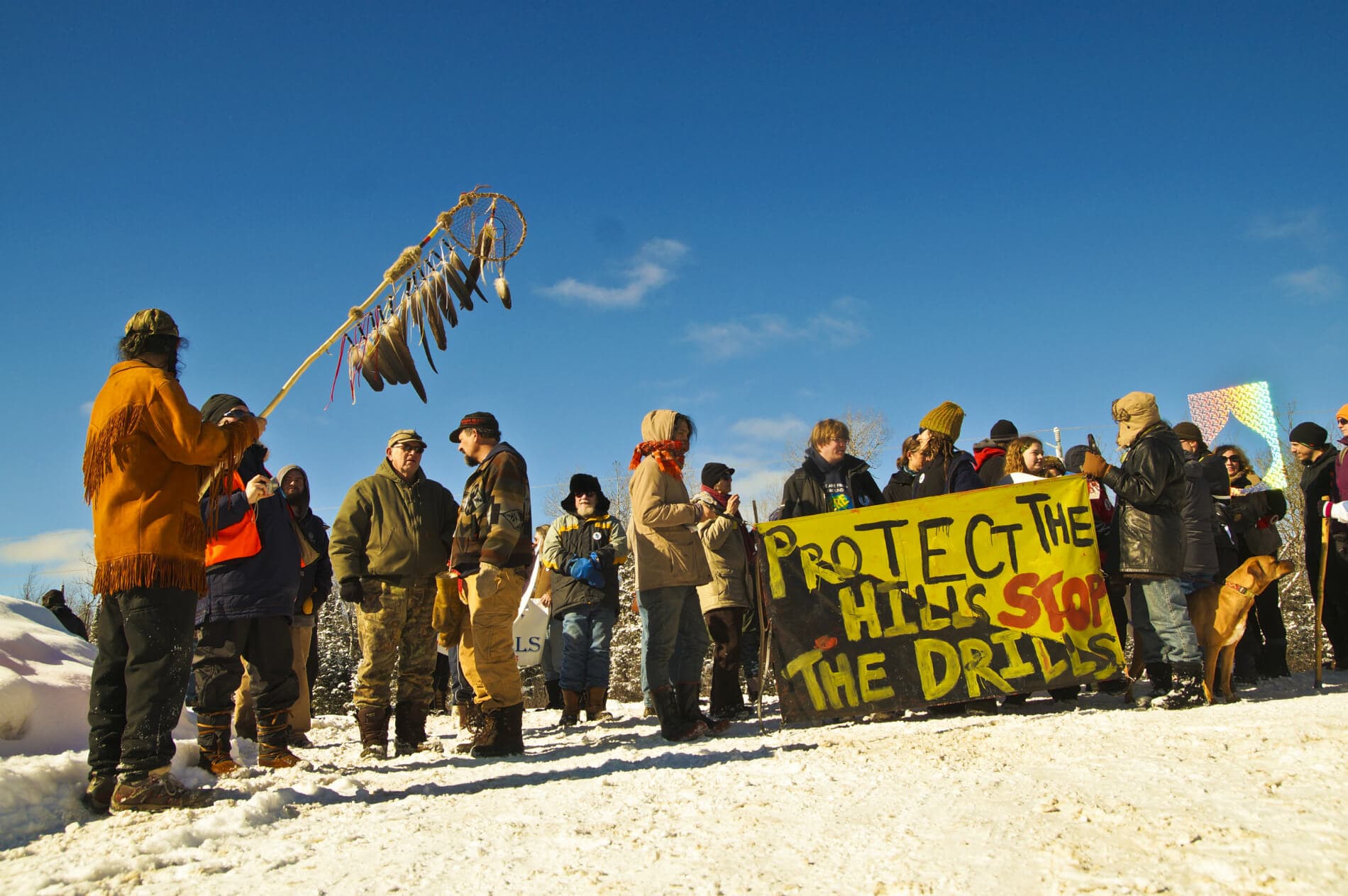 A 2014 protest against the Penokees mine near the Bad River Ojibwe Reservation in northern Wisconsin. Joe Brusky/Flickr, CC BY-SA

One advantage that sovereign tribal nations have in these battles is that they can draw federal agencies and courts into the fray in a way that local and state governments cannot.

Tribes are in the fight for the long haul, because the survival of their cultures is at stake. They can’t simply move away from environmental hazards, because they have harvesting rights only within their treaty territory, and their identities and cultures are rooted in a particular place.

Some areas of the most intense treaty conflicts, where the tribes most strongly asserted their rights, developed the earliest and most successful tribal alliances with white farmers, ranchers and fishers.

In these areas, rural populists have begun to see the tribes as more effective guardians of their local economies from large corporations than their state, local or federal governments. Wisconsin fishing guide Wally Cooper had spoken at rallies against Ojibwe treaty rights. He told me he changed his mind “because Native Americans can stop” the Crandon mine that threatened the rivers that he loved.

The success of these unlikely alliances challenges political stereotypes. Some progressives tend to dismiss rural whites as recalcitrant and unwilling to treat people who are different as equals.

Many conservatives – along with some liberals – presume that highlighting cultural differences through identity politics gets in the way of unifying people who otherwise share economic or environmental goals.

But celebrating differences and unity can be compatible. Native sovereignty can protect land and water for all rural people, and help build an anti-corporate movement that crosses cultural lines. If even cowboys and Indians can find common ground, maybe there is hope for what I call cross-cultural populism.