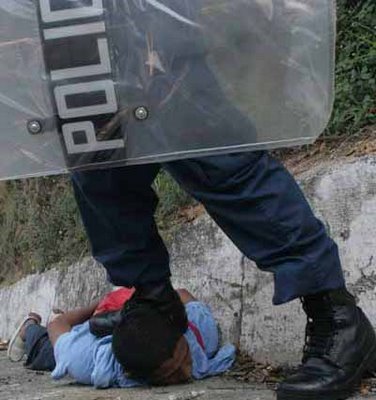 At least twenty indigenous Awajun and Wambis have died and hundreds more have been injured after a brutal confrontation this morning (June 5) on the Fernando Belaunde Terry Road in the Peruvian Amazon.

JUNE 7 UPDATE, 2:00PM EST – Fortunately, there have not been any further reports of violence. However, the previous report that three children were killed has been confirmed by the international NGO “Save the Children.” Several media outlets have also confirmed that the police took injured indigenous people from hospitals. The report of midnight raids, on the other hand, appears to have been false.

Keep an eye on http://noticiario.baguaperu.com/ and http://peruanista.blogspot.com/ for further updates. Also here’s a radio interview with Tupac Enrique about what’s happened, and a a pretty good Analysis of events by Gerardo Rénique

6:30PM EST – The situation seems calm for the moment, but there have been a couple recent and concerning updates. 1) A couple hours ago a report came out that the military started entering hospitals and taking injured indigenous people to an “unknown location.” strong>2. Another report from around the same time, indigenous people in are saying the military have been entering towns “in vengeance.”

2:30PM EST – The situation is ongoing. Early this morning there was a police raid that ended with 9 officers dead and seven reported missing (source). These and 22 others were being held by a group of indigenous people after yesterdays attack, which has since been termed “a massacre” by the Vice President of the UN Indigenous Forum (source). It has also been reported that a total of 3 indigenous children lost their lives in the attack. Another state of emergency has also been declared (source).

Finally,though unconfirmed: the very latest news is that the MILITARY is preparing to take control of the Amazon regions of Bagua & Utcubamba at midnight TONIGHT.

See below for previous updates, videos and web resources from DAY 1: June 5, 2009

UPDATE, 8:30PM EST – A local indigenous leader has stated that indigenous people are still being killed, and that the police are actually burning the dead and dumping the remains into the Marañón River (source) Early in the day the government was accused of committing genocide. Painfully, this confirms it.

UPDATE, 6:30PM EST – According to one local report the total number that have died may be as high as 84. And in the last couple hours a group of 38 policeman were taken hostage. Meanwhile, the government is squarely blaming everything on “a group of ‘poor peruvians’ who were plotting against democracy and the country.” (source)

UPDATE, 2:00 EST – Carlos A. Quiroz has posted a detailed update on his blog with a full list of things you can do to help. He states by email:

“The government of Peru has ordered for the National Police to attack the Amazonian Indigenous peoples. Civilians were shot from buildings roofs and helicopters.

More than 38 people have died so far – at 2:00 PM U.S. Eastern time- including 28 civilians and 18 police men, according to a Tweeter sent by a Peruvian journalist who is in the area of Bagua, a city located in the Amazonas region of Peru. Hospitals collapsing.

Amazonian Indigenous leader Alberto Pizango, of AIDESEP said the government has committed genocide and that they will continue their fight and will rally in cities of Peru.

Peru’s president Alan Garcia is on national TV right now and has accused the Indigenous leaders of the violence “They want to play a revolution game,” and later on he added that “brave Police forces have fallen in defense of the nation,” and said he might send the military this is just beginning. Peru minister Mauricio Mulder calls indigenous protesters “terrorists”.

Demand an immediate end of violence!. Please send emails to Alan Garcia, the Congress of Peru, the Peruvian Embassy in the US, the US Embassy in Lima, go to this link:

Below, an initial report from Amazon Watch on the assault

Bagua, Peru (June 5, 2009) – At approximately 5 am this morning, the Peruvian military police staged a violent raid on a group of indigenous people at a peaceful blockade on a road outside of Bagua, in a remote area of northern Peruvian Amazon. Several thousand Awajun and Wambis indigenous peoples were forcibly dispersed by tear gas and real bullets, among them are confirmed reports of at least 18 injured and four people confirmed dead, although the number of dead is likely to be several times higher.

At 2am police began to approach the demonstrators as they were sleeping along the Fernando Belaúnde Terry road. Demonstrators refused to move from the roadblock as helicopters dropped teargas bombs from overhead. Eyewitnesses report that police attacked from both sides firing real bullets into the crowd as people fled into the hills. As the unarmed demonstrators were killed and injured some wrestled the Police and took away their guns and fought back in self-defense resulting in deaths of several Police officers.

In local radio reports, the chief of Police claimed that the indigenous demonstrators were armed with guns necessitating the use of bullets for dispersal. This claim is refuted by dozens of local eyewitnesses including local journalists. Marijke Deleu, a Belgium environmentalist from the local conservation organization reported from the scene that the Amazonian demonstrators have been entirely peaceful and only bear traditional spears and in no way provoked any violence.

The Garcia Government yesterday accused the indigenous movement of turning violent and issued an order for the police to begin forcibly removing indigenous demonstrations that have paralyzed the Amazon region of Peru for nearly two months.

Gregor MacLennan of Amazon Watch who is currently in Peru stated: “It is outrageous and absolutely untrue that indigenous peoples provoked violence. Rather, they are engaged in peaceful and non-violent civil disobedience in the tradition of Martin Luther King and Mahatma Gandhi. It has been the Peruvian Government forces who have provoked violence against peaceful people who are trying to protect their forests, their sacred lands from shortsighted pollution and industrial development. They are sacrificing a lot to safeguard the Amazon for future generations and for all Peruvians.”

Indigenous peoples have vowed to continue protests until the Peruvian Congress revokes the “free trade” decrees issued by President Garcia under special powers granted by Congress in the context of the Free Trade Agreement with the United States.

The protests have provoked national debate about government policies in the Amazon that ignore indigenous peoples and encourage large-scale extractive industries and the privatization of Amazonian lands. Indigenous peoples claim that new laws undermine their rights and open up their ancestral lands to private companies for mining, logging, plantations and oil drilling.

A coalition of human rights and environmental organizations are urging the Garcia Government to step down and cease violent confrontations by the military and calling for solidarity demonstrations at Peruvian Embassies around the world.