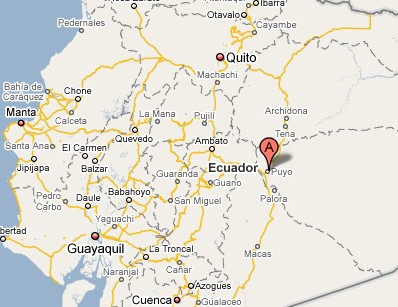 Anywhere up to 1,000 police officers in Ecuador were sent last week to evict 300 Kichwa, Shuar and Huaorani families from a 70-hectare lot of land which the Indigenous People had reclaimed early last year.

The officers used force to remove the families after they refused to leave on their own. At least one person was wounded by a gunshot during the eviction.

Members of the alleged owners of the land, a group of seven (non-indigenous) families, were present as well. According to some reports, they decided to take an active role in the eviction and ‘help out,’ by setting fire to the homes that the indigenous peoples built while waiting for government recognition of their ancestral title to the land.

Following the eviction, The National Indigenous Confederation of Ecuador (CONAIE), expressed its protest against the eviction, calling it an invasion, and saying, “[they] did not even give a space of 15 minutes for the owners to retrieve their things.”

Explained further in a press statement, CONAIE says the families had no foreknowledge of the eviction, but that it was in any case illegal because the land historically belonged to, and was occupied by the Indigenous Peoples.

Here’s a short video of the eviction, from Confirmado.net