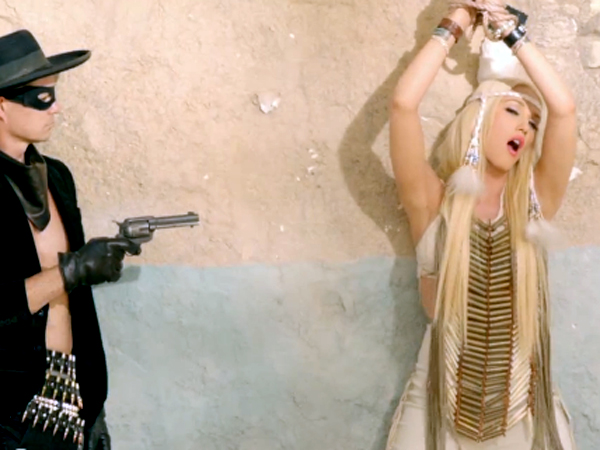 Playing Indian: Endemic Issue of Indigenous Stereotyping Back In The Spotlight

‘Playing Indian’ is no novel phenomena, notes Philip J Deloria in the introduction to his brilliant study of the same title. Groups of white Americans have been appropriating Native American identity since before the Boston Tea Party of 1773. Such appropriations have had observably damaging effects on Indigenous Peoples of the continent who have been routinely excluded from processes that would create accurate and specific representations, allowing them to be ‘imagined’ by colonial minds often as either stereotypical Noble or Inhuman savages.

Two events of the last few months have reminded us that the injustices made possible through the rhetorical draw of imagined ‘Indian images’ are contemporary as well as historical. The most recent non-native parties to act out their fantasies of indigineity are ska/rock group No Doubt and the Victoria’s Secret underwear brand. Both have since been embroiled in controversies concerning this mimesis of Native American dress and identity.

No Doubt’s recent comeback music video featured lead singer Gwen Stefani as a partially dressed Indian maiden tied up at the mercy of her cowboy captors and, according to the song’s title, ‘Looking Hot’. Also boasting provocative lyrics, the video was removed just hours after its release due to the sheer number of complaints alleging that its subject matter was culturally inappropriate.

Despite this outcry, just a week later stills were released of model Karlie Kloss walking an impossibly skimpy leopard print bikini complimented by a feathered headdress and turquoise jewellery at the Victoria’s Secret fashion show.

Author of the Native Appropriations blog Adrienne K voiced her disbelief and dismay that so soon after the last controversy “NOBODY at Victoria’s Secret saw one of the hundreds of articles about No Doubt and thought, hm, maybe we shouldn’t include a woman in a headdress and a fake buckskin bikini?”

As a result of their apparent lack of awareness and/or sensitivity Victoria’s Secret were subsequently inundated with complaints akin to those so recently directed at No Doubt’s own screen frolics. The footage of Kloss in the offending outfit was cut from the airing of the show.

Such a swift and strong reaction against the appropriation of (inaccurately portrayed) Native American identity is certainly a good sign, especially when considered alongside efforts to promote Indigenous business. It is an indicator to the general public that strong and informed Indigenous peoples are aware of their rights and power. Similarly positive is the fact that this reaction was seemingly accepted and acted upon by the offending parties who both offered up official apologies.

Though these apologies have been graciously accepted by Native American communities, it is worrying that both No Doubt and Victoria’s Secret claim they did not ‘mean to cause any offense.’

Whilst some non-native observers have and will cry foul over what they see as political correctness gone mad, the fact is that these latest two transgressions reveal an endemic culture of Indigenous stereotyping in the US, the importance of which have seemingly passed American settlers by for many centuries.

Far from being ‘a bit of holiday fun’ dressing up and ‘playing indian’–whether on Halloween, in a music video or on the catwalk–non-native Americans contribute to a fabricated spectre designed to historicize, trivialize, eroticize and ultimately colonize actual people.

Considering the hows and whys of this process can help us understand that the impacts of appropriation and stereotyping are far from trivial and go beyond the world of images.

Regarding the two specific cases referred to in this article, we are able to see that many such appropriations and the stereotypes created by them are strongly gendered. Taiaiake Alfred has noted that Native American women have been specifically targeted by colonization activities over the centuries. Referring specifically to the Haudenosaunee, he imparts some useful information:

“The central objective of colonization, as it was practiced in our part of the world, was to impose cultural practices and to impose world views that come from Europe on Indigenous peoples. It just so happens that at the time that this project was in full force, doing its business, patriarchy and the subjugation of women was at the forefront of that culture…If you’re trying to steal somebody’s land, you have to go after the owners, and in the Haudenosaunee community, the owners, it so happened, were the females. So you put those two together, and it’s a pretty compelling reason to go after the traditional roles of women in our society.”

A key feature of these traditional roles of which Taiaiake speaks is the good degree of equity in social relations between Haudenosaunee men and women–an equity absent from European society.

Native women from many groups have experienced a similar struggle since the dawn of Western colonialism; a key feature of their disempowerment has been the creation and maintenance of hyper-sexualized stereotypes. Karlie Kloss and Gwen Stefani both provide a perfect example of how, through appropriating and amending features of American Indian identity, this stereotype has been perpetuated in the present. In their respective contexts they portray Native American females to be promiscuous, dusky maidens who have retained some kind of primordial animalistic sexual energy which must be somehow conquered. In more recent years this image has been popularized as that of the ‘sexy squaw’ for whom clothing and dignity are seemingly best kept to a minimum.

There can be no doubt that this manifestation of the non-native imagination is in part responsible for the horrifying statistics concerning the sexual abuse of Native American women in the United States. A recent study undertaken by Amnesty International showed that 1 in 3 Native American women will be raped in their lifetime with 70% of assaults committed by non-native men. Needless to say, these statistics vastly exceed the national average for such heinous crimes.

Subjection to this level of sexual terror and pressure is a key tool of the continuing mental and physical colonization of communities often isolated from access to meaningful justice (Native Americans are unable to judge crimes committed in their own communities by non-native persons). It is aided and abetted by the voracious sexualisation of the female Native American body in mainstream media and carnival practice.

This stark causal example, drawn between image and actuality, should grab the attention of those who would decry all of this as good fun. And yet perhaps not, as another key feature of the systematic racism encoded within these stereotypes is the imagining of Native Americans as historical figures. It is key to use the prefix ‘imaginary’ here as the ‘indian’ of image and stereotype is but a useful trope, a figment of Euro-American imaginations.

Returning to the work of Deloria we are shown that Native Americans have always been excluded from this process of imagining the ‘indian.’ The reason? In striving to create their own American identity in a land they tore from its Indigenous inhabitants the indian is useful but cannot simultaneously exist if such an identity is to be achieved. The claim of European settlers to be American cannot be ratified whilst the original inhabitants of the land remain. Colonialism dictates they must be eliminated or assimilated.

Whilst attempts to physically enact this elimination have failed (though not for lack of trying) the next best thing has been to create an image of the Native American in popular culture and imagination which parades the falsity that these people are gone, undermining legitimate contemporary claims to indigenous authenticity.

Images of chiefs resplendent in ceremonial head dresses, of buck skin clothing and colourful beads crowd non-native perceptions of what it looks like to be Native American and populate costume shops and TV screens alike. These heavily stereotyped images hold the key to historicizing Native American peoples who are in fact very much alive and practicing their traditions today. In this way Native Americans can be disregarded by those who cannot move past their conception of Indigenous identity as skin deep. Removing the existence of ‘real’ Native Americans from the equation leaves the way clear for Euro-Americans to claim America as their own staking their identity on their ‘ownership’ of the land and the domination necessary to gain it.

All of these factors point towards an enduring and distinctly colonial brand of discrimination. And yet another key trope of this prejudice is to homogenize, not discriminate, creating a third way in which stereotypes can act as tools for disempowerment.

How often is it that a reveler of European descent dresses up specifically as a member of the Apache, the Sioux, the Haudenosaunee or the Kwakiutl? And how often are these groups given space in the media as themselves? Almost never. Instead it offers up only the image of the ‘indian’. Again this is due to the absence of Native American access to their own representation on this stage, an absence which, echoing through the ages, has allowed White Euro-American ideologies to collapse Native American identity.

In doing so the individuality and efficacy of Native American claims to their land and multi-faceted heritage has been undermined. Until it is widely recognized that Native American peoples, though they share a common heritage of sorts in their experiences of pre- and post-colonial America, constitute more than a homogenous horde their specific needs and struggles will not be properly addressed or heard.

So, in light of the history, in light of the observable effects of the media and in the blood red glare of colonial rhetorics can anyone truly claim that this is still just a lark? To the person who dresses ‘native’ at Halloween and for those who may make a music video or curate a fashion show, ‘playing indian’ may not feel like a big deal because of the gulf which has separated their experiences of their fledgling nation from those of Native Americans, but it all contributes, it all makes the gulf wider. Essentializing difference, legitimizing dominance, stereotypes conjured by colonial imaginations rely on the over perpetuation of like images to prop them up.

It must be hoped that the informed and impassioned outcry at the latest high profile appropriations will help kick out these props and raise awareness until it reaches a point at which no-one can claim to have ‘meant no offense’ by participating in the practice of ‘playing indian.’ Only the total and equitable inclusion of Native American peoples in all narratives concerning their own lives and identities should be deemed acceptable in the fight for accurate representation. It is time Euro-Americans relinquished their grip on constructed claims to the ‘indian’ and respect the authenticity and autonomy Native American peoples have been denied by the poisoned image of themselves and countless other injustices for over 300 years.

This article owes a great depth of gratitude to those who have dedicated themselves to fighting racial injustice and inaccurate representations at multiple levels. These include Adrienne K of the Native Appropriations blog, all those running the F.A.I.R blog and the work of Philip J Deloria.