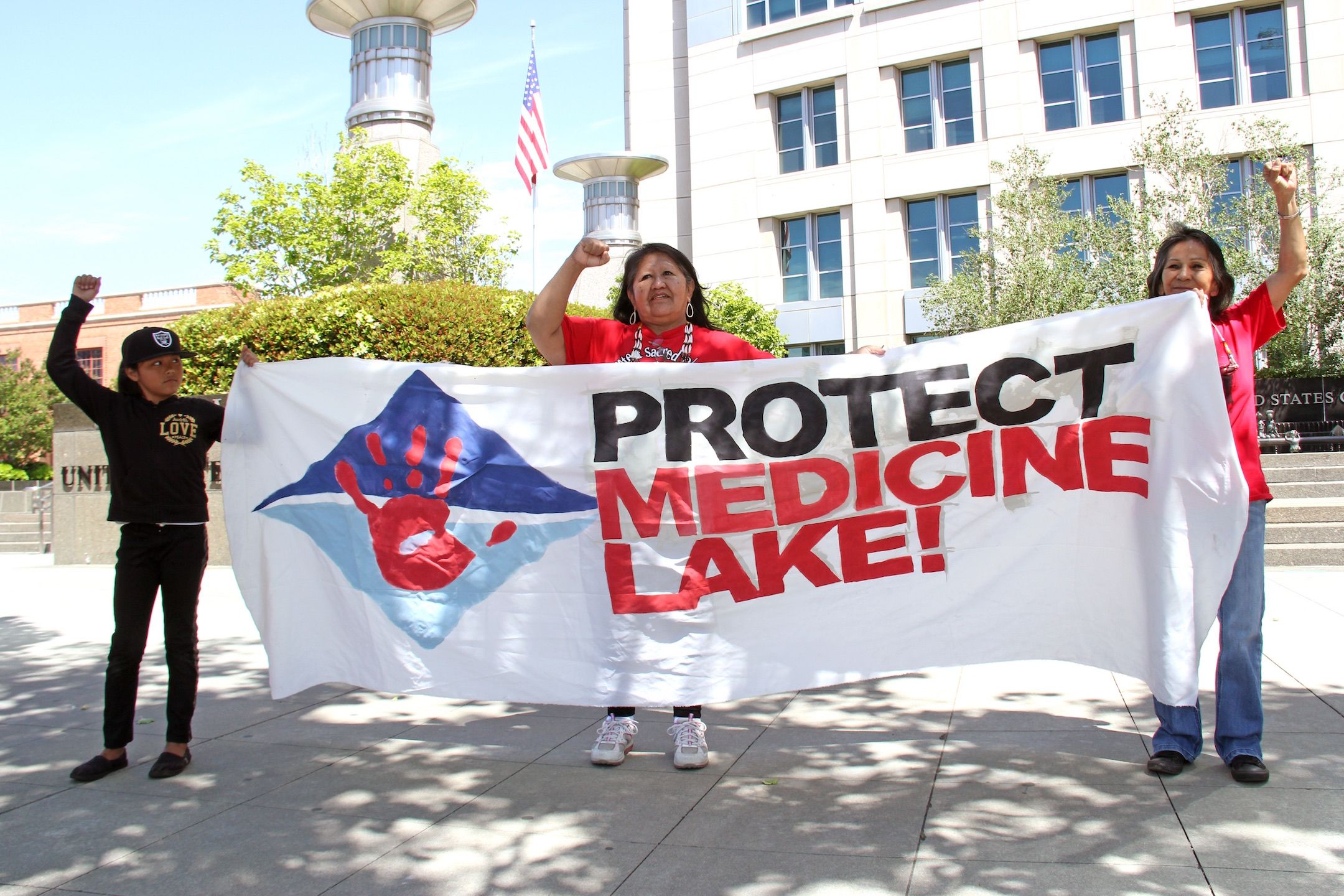 The 9th U.S. Circuit Court of Appeals declared a victorious win for the Pit River Tribe and Indigenous Nations in a decades fought dispute over geothermal leasing on federal land within California’s sacred Medicine Lake Highlands.

On Thursday, the court issued a summary judgment by the panel ruling in favor of Indigenous Nations and environmental groups in their action against federal agencies responsible for administering twenty-six geothermal leases located in California’s Medicine Lake Highlands, which threatened to desecrate and industrialize the pristine and rugged sacred landscape. This is especially egregious due to the lack of scientific evidence of the effectiveness of this method of geothermal steam extraction to produce energy.

The historic win for California tribes is part of a long struggle for basic recognition and protection of tribal territories. The Medicine Lake Highlands are held sacred by the Pit River Nation as well as many other Tribal Nations which include the Wintu, Karuk, Shasta, Klamath, Yana, and Modoc peoples.

At a time when the Trump administration is accelerating attacks against Indigenous sovereignty and ecosystems, the Pit River Nation and its allies have scored a historic victory in its long court battle to protect the Medicine Lake Highlands from industrial geothermal power. “Our sacred lands are all that remain keeping us connected to our place on Mother Earth, to our spirituality, our heritage and our lands; what’s left of them,” said Bill George, Atsugewi band elder of the Pit River Nation. “If they take it all away, what will remain except a vague memory of a past so forgotten?”

The Pit River Nation alleged that the Bureau of Land Management’s decision to continue the terms of the leases for up to forty years violated the Geothermal Steam Act (“GSA”). The Ninth Circuit panel of judges affirmed a previous decision from the district court in a legal battle that has focused on violations of the Geothermal Steam Act, the National Environmental Policy Act, National Historic Preservation Act, and the Indian fiduciary trust doctrine. Plaintiffs in the case included the Pit River Nation, Native Coalition for Medicine Lake Highlands Defense, Mount Shasta Bioregional Ecology Center, Save Medicine Lake Coalition, Medicine Lake Citizens for Quality Environment.

For thousands of years before European arrival to the Americas, the Indigenous people of Northern California have made pilgrimages to the Highlands for healing, religious ceremony, and tribal gatherings.

The late Willard Rhodes, Itsatawi Tribal Council Member, Cultural Representative and Elder said of Medicine Lake, “When creating the world, when it was moist, the maker of life stopped here to rest and drink and wash and imparted himself in the water. That’s why we respect this place deep in our hearts.”

25 years ago, the Bureau of Land Management (BLM) issued 26 geothermal leases, with only cursory environmental review and no tribal consultation in the Highlands. This has posed a grave threat of desecration and total destruction to a precious place of deep religious significance, in the name of five proposed geothermal power projects that would increase geothermal extraction to a total of 500 megawatts.

“We are gratified by the Court’s affirmation of the plain text, logical reading of the statute. The decision means that if the Bureau of Land Management wants to revive or reissue the leases, it will have to engage in meaningful government-to-government consultation with the Tribe and conduct adequate environmental review,” Deborah A. Sivas, Stanford Environmental Law School, who represents the Plaintiffs long-standing challenge to Calpine Corporation. “Of course, our fervent hope is that the agency and the lessee will see the wisdom of walking away from development in this sacred landscape”

The fight for the protection of Medicine Lake has mobilized tribal and intertribal communities and historic coalitions, and it is a significant victory among the many Indigenous movements to protect pristine sacred places and systems of life, said Andrea Carmen, Executive Director of the International Indian Treaty Council.

“The International Indian Treaty Council (IITC) has stood by Pit River Nation in the many years of effort to achieve this important victory. Despite the US Human Rights obligations to protect sacred sites and freedom of religion for Indigenous Peoples the decisions of the US courts have not always upheld these obligations,” Carmen said. “The International Indian Treaty Council has presented the case of Medicine Lake as an important struggle to various treaty bodies, such as UN Committee on Racial Discrimination and Human Rights Committee. These bodies have consistently upheld US obligations to comply with these UN Conventions as well as the United Nations Declaration on the Rights of Indigenous Peoples. So this is an important victory for not only Pit River but all Indigenous Peoples all over the world.”

Cecilia Silvas, Ilmawi Band Elder, explains “Medicine Lake is our church. It is there we heal our bodies and our spirits.” For California Native people that are descendants of the survivors of many waves of genocidal violence that aimed to eradicate their nations from the lands they have inhabited for millennia, the ecological protection of Medicine Lake is one and the same as the protection of Native people, knowledge, and spirit. Native science, spirituality and worldview has long understood that the health of the lake would protect the health of the people. In the words of Floyd Buckskin, Headman of the Ajumawi Band “The lake, the mountains around it, the springs, hunting grounds, and gathering areas are an interconnected whole – whose parts that are tied together through the Creator’s power or the spirit that inhabits them.” If approved, industrial-scale geothermal development would desecrate the Medicine Lake Highlands, threaten the underlying aquifer and result in the injection of toxins into the atmosphere and waters that people, animals, and all beings need to survive.

Pit River Tribal Chairwoman Agnes Gonzalez proclaimed: “The Bureau of Land Management’s mission is to sustain the health, diversity, and productivity of public lands for the use and enjoyment of present and future generations. If the Bureau of Land Management followed their mission, they would not continue to use United States government resources to support corporate interests over that of the public they claim to serve. And by doing so, putting our public health and safety at risk and destroying these lands so future generations will not be able to enjoy them. No new leases in the Medicine Lake Highlands!” Geothermal development will leave devastating impacts on deeply-held religious views and practices, traditional cultural values, pristine environmental resources, and rare opportunities for safe and responsible recreation and peaceful enjoyment of this most sacred of places in our lifetimes and for future generations to which we owe its protection. Following the announcement, Native American Heritage Commissioner for the State of California Merri Lopez Keifer affirmed, “Today has shown us that justice has prevailed.”